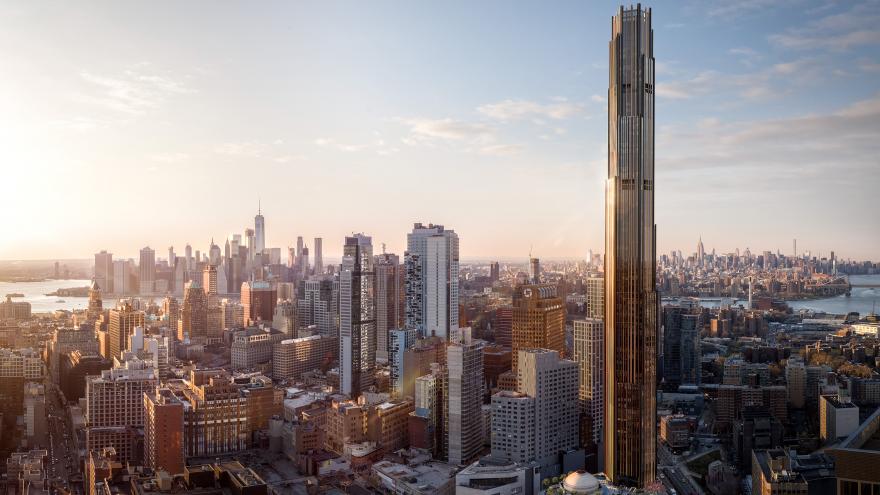 (CNN) -- Manhattan is no stranger to supertall skyscrapers but Brooklyn's skyline has now radically changed as its first supertall reached its full, vertiginous height on Thursday.

The 93-story, 1,066-foot-tall residential building, standing at 9 DeKalb Avenue in Downtown Brooklyn, was designed by SHoP Architects. (Supertalls, by definition, are residential or office buildings reaching 300 meters -- 984 feet -- or higher.) Newly christened "The Brooklyn Tower," it has been under construction since 2018 and cost $750 million total to develop.

Now, the skyscraper's fluted black stainless steel, bronze and glass exterior emerges from behind the white marble neoclassical facade of the landmarked early 20th-century Dime Savings Bank. JDS Development Group, which spearheaded the project, bought the decommissioned bank for $95 million in 2016; its intricate interior is being restored and converted for retail use, while the rooftop will host residential amenities including a pool that extends around its dome.

"We want(ed) to do something that changes the skyline," said Michael Stern, founder and CEO of JDS Development Group in a video call. But, he added, "it's not an easy feat."

"It's the combination of a landmark building and a contemporary tower, and (we had to) thread the needle on how to do that respectfully and with design integrity," he explained.

The site of the development is also irregularly shaped, as the building sits on the majority of a triangular block. (JDS bought the neighboring 340 Flatbush Ave. for $43 million, but the 1950s diner Junior's remains on one of the corners.) Because of that, the architects opted for a hexagonal plan rather than rectangular.

"We looked at the way the original architects dealt with the geometry of the site," said SHoP's founder, Gregg Pasquarelli, over video. "They used hexagons and six-sided stars...We liked the idea that the interlocking hexagons would never make you feel like you weren't looking at the front of the building."

While 9 Dekalb may stand out for being the tallest recent arrival, it's actually one of many new developments rapidly transforming Brooklyn's profile. Already New York's most populous borough, Brooklyn grew the most out of its other four counterparts this past decade, according to 2020 census data -- with a 9.2% jump bringing the total population to 2.74 million. As New York transplants and former Manhattanites have crossed over the Brooklyn Bridge, developers have followed suit, zeroing in on Downtown Brooklyn and Brooklyn Heights as the next areas to extend the city's skyline. The Williamsburgh Savings Bank Tower, built in 1929, had the distinction of being Brooklyn's tallest building for 80 years, but since 2009, it has been bumped to the bottom of the top 10.

But the construction of The Brooklyn Tower doesn't necessarily mean other super towers will follow in the borough, according to Pasquarelli.

"We knew that this would be the tallest building in Brooklyn -- and probably will be for many decades to come," he said. "There's no other place, really, (where) you could build a building this tall."

In Manhattan, however, it's a different picture, with super slim luxury buildings soaring higher and higher, many of them concentrated in an area just below Central Park dubbed "Billionaire's Row." (JDS and SHoP previously designed one of these residential spaces at 111 West 57th Street.) Manhattan's supertalls, haven't always made headlines for the right reasons, from the spindly 432 Park Avenue, which, according to a New York Times report earlier this year, has suffered flooding, noisy wind sway and electrical explosions, to the unfortunately named PENN15 office tower which reportedly became a point of contention between former governor Andrew Cuomo and outgoing mayor Bill de Blasio.

Not your average supertall

The Brooklyn Tower, however, is a rarity among residential supertalls, offering more than just multi-million dollar apartments. In addition to 150 "rationally sized" condominiums, as Stern describes them, there are also 400 rentals -- with 30% of them designated as affordable housing through the Housing New York program.

"When you think of supertalls in New York, you really think of Billionaire's Row and apartments for the ultra elite who may or may not live there," Stern said. "(This is) a real building that real people are going to live in and be...part of the city's fabric." He added: "It's just fundamentally a different typology."

Though new developments can often become a sore spot -- particularly in a borough where gentrification has become a hot-button topic -- 9 DeKalb did not receive any push back from its local community board back in 2016. The board's land use committee enthusiastically supported the proposal, according to local paper, the Brooklyn Eagle, and the Landmarks Preservation Commission approved the project quickly as well.

Erecting the tallest building in Brooklyn is certainly an attractive proposition for the developers and designers on the project, but Pasquarelli hopes the new addition to the Brooklyn skyline will become a larger symbol for the city.

"We talked a lot in the very beginning about what it means to put a supertall in Brooklyn," he said. "Is it Manhattan-only territory? Are we bringing Manhattan to Brooklyn? No. Brooklyn is such an incredible, thriving, culturally rich place. It should have its own tower."