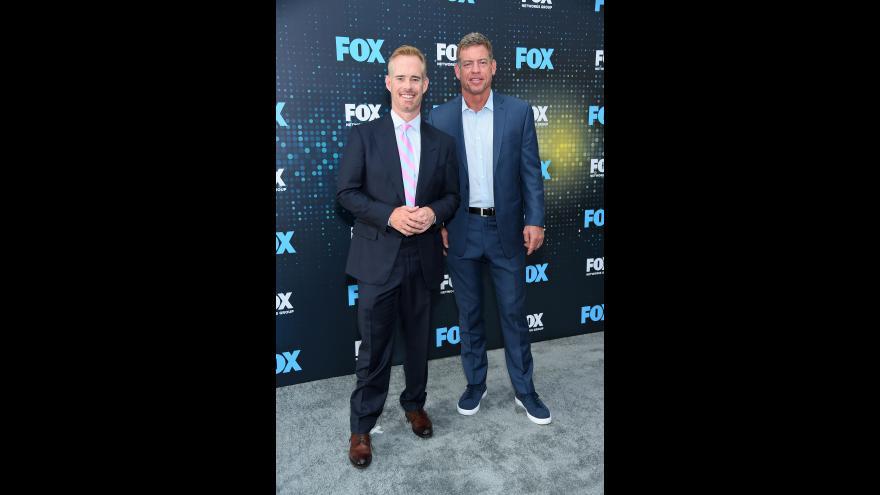 Joe Buck, left, and Troy Aikman are in hot water for comments they made over a military flyover.

(CNN) -- Military flyovers can be awe-inspiring to watch and are practically tradition at many sporting events.

But you can count broadcasters Troy Aikman and Joe Buck among those seemingly not impressed with them. The pair are in hot water after a hot mic picked them up apparently criticizing and mocking the display of jets flying over Raymond James Stadium in Tampa prior to the Green Bay Packers-Tampa Bay Buccaneers game on Sunday.

"That's a lot of jet fuel just to do a little flyover," Aikman is heard saying in a video clip.

"That's your hard-earned money and your tax dollars at work!" Buck replied in a mocking tone.

It's unclear whether Aikman and Buck are against the flyovers or are mocking critics who oppose them. Fox Sports did not immediately respond to a request for comment from CNN.

The military, however, told CNN flyovers are classified as training missions and are no additional cost to the public.

"Flyovers at community events are flown in conjunction with pre-scheduled training missions or other skills training missions at no additional cost to the government," Ann Stefanek, Air Force spokesperson, told CNN.

Navy spokesman Lt. Rob Reinheimer also said, "Flyovers are conducted at no additional cost to the taxpayer and serve as training and meet proficiency requirements for our pilots."

Raymond James Stadium is allowing only a limited number of fans in, at a 25% capacity, so only a small crowd was on hand to watch the display.