Brittney Griner's detention in Russia has been extended by a month, Russian state news reports 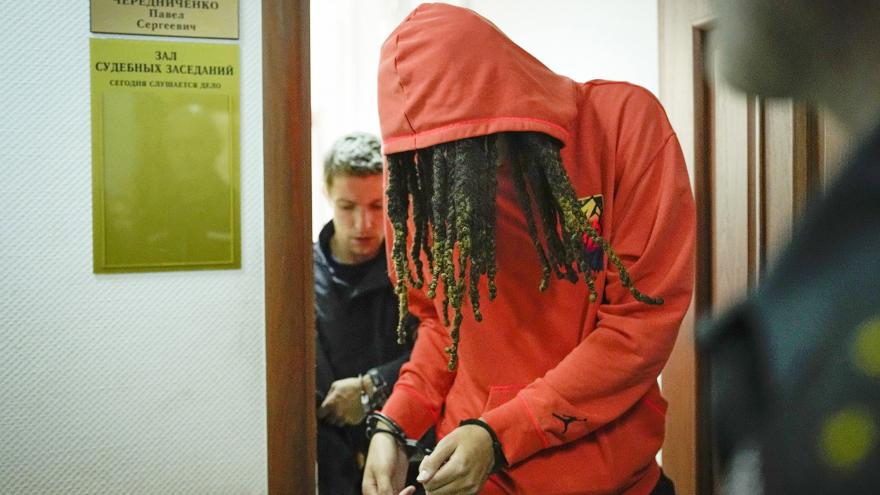 (CNN) -- A Russian court has extended the detention of US basketball star Brittney Griner -- held since February on accusations of drug smuggling -- for another month, Russian state news agency TASS reported Friday.

Griner, who the US government has said is being wrongfully detained, will now be held at least until June 18, a court in Khimki outside Moscow ruled Friday, TASS reported, citing the court's press service. Leaving a hearing Friday in the Khimki court, she was handcuffed, wearing an orange hooded pullover with her head down, an Associated Press photo shows.

Supporters including Griner's family and the WNBA have vigorously advocated for her release, with some expressing concerns Russia would use Griner as a political pawn amid tensions between that nation and the US over Russia's invasion of Ukraine.

A two-time Olympic gold medalist and star for the WNBA's Phoenix Mercury, Griner, 31, was arrested in February at a Moscow airport. Russian authorities said Griner had cannabis oil in her luggage and accused her of smuggling significant amounts of a narcotic substance -- an offense punishable by up to 10 years in prison. She had been playing for a Russian team in the WNBA offseason.

A Russian court announced in March it had extended Griner's detention until mid-May. A trial date had not been set, a source close to the situation told CNN at the time.

US classified her as wrongfully detained

The US State Department has classified Griner as wrongfully detained in Russia, and her case is being handled by the office of the US special presidential envoy for hostage affairs, a State Department official confirmed to CNN last week. The office leads and coordinates the government's diplomatic efforts aimed at securing the release of Americans wrongfully detained abroad.

In addition to work by the Biden administration, the Richardson Center, which privately advocates on behalf of families of hostages and detainees, is working on behalf of the Griner family to try to secure her release.

The WNBA views federal authorities' move to classify Griner as wrongfully detained as a "positive development and a next step to getting her home," a league spokesperson said last week.

Griner was the No. 1 pick in the 2013 WNBA draft and is one of the league's all-time best players.

The league, which started its 26th regular season last week without Griner, is honoring the seven-time all-star with her initials and jersey number (42) along the sidelines of all 12 home courts. Griner will also be paid her full WNBA salary, the league said.

Last season, Griner finished second in Most Valuable Player Award voting. The 6-foot-9 center led the Mercury to the WNBA Finals, where Phoenix lost to the Chicago Sky.