Brittney Griner to testify at trial in Russia, lawyers say 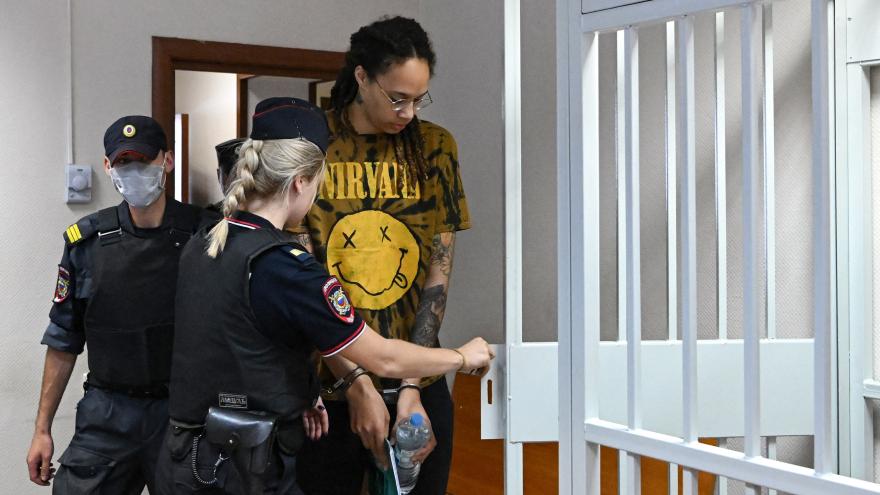 (CNN) -- WNBA star Brittney Griner will testify as part of her drug trial in Russia on Wednesday, her lawyers said, as her defense team claimed that cannabis oil found in her luggage was for medicinal purposes.

"Griner will testify tomorrow, and after that, it's her decision whether she answers any questions or not," Alexander Boykov, a lawyer for Griner, told CNN on Tuesday. Prosecutors also will have an opportunity to question Griner.

The two-time Olympic gold medalist made a brief court appearance at the Khimki court of the Moscow region on Tuesday where her defense team presented evidence.

Griner, 31, pleaded guilty to drug charges earlier this month but the US State Department says she is wrongfully detained. She faces up to 10 years in prison. Griner's supporters have called for her release over fears she is being used as a political pawn amid Russia's war on Ukraine.

At Tuesday's hearing, which lasted about an hour, a narcologist brought in by Griner's lawyers said that based on the WNBA player's prescription, it is likely Griner used the cannabis oil found in her luggage for medical purposes rather than recreational purposes.

The narcologist, Mikhail Tetyushkin, explained that "medical cannabis is a popular treatment specifically among athletes" in many countries outside Russia.

Tetyushkin presented the court with information on the use of medical marijuana by athletes, saying that the frequent use of cannabinoids is incompatible with professional sports due to the effect of relaxation and inhibition of reaction times.

He also told the court on Tuesday that there is no global standard on the quantity of cannabinoids in medical marijuana.

Griner's lawyer, Maria Blagovolina, told the court that an initial report from the prosecution's expert witness was "inconsistent" and not according to scientific and legal standards.

Blagovolina said the report from the prosecution's expert witness did not determine the quantitative content of tetrahydrocannabinol (THC) in the cannabis oil found in Griner's luggage. THC is the principal psychoactive substance in cannabis.

When the hearing concluded, Blagovolina said Tetyushkin "explained that in various countries -- namely in the US -- medical cannabis is a popular treatment specifically among athletes."

"Thus, with the prescription in place, Brittney may have used it for medical but not recreational purposes," Blagovolina added.

Tuesday's hearing, the fifth so far in Griner's criminal trial, was attended by US Embassy Charge d'Affaires Elizabeth Rood.

Speaking to press outside the court, Rood told reporters that Griner confirmed that she is doing as "well as can be expected under these circumstances."

The trial is expected to end early next month, Griner's lawyers have said.

The Phoenix Mercury basketball star was arrested in February at a Moscow airport with less than a gram of cannabis oil in her luggage. Griner, who plays in Russia during the WNBA's offseason, has been held since then on drug smuggling charges. Her trial began in early July.

A prosecutor at the start of her trial in Moscow accused Griner of intentionally smuggling the drugs into Russia.

Griner told a court that she had not intended to commit a crime and that it was the result of her packing in a hurry, state news agency RIA Novosti reported. Her defense team told Russian judges that she was prescribed medical cannabis for "severe chronic pain."

The defense hopes the plea will be considered by the court as a mitigating factor and the sentence won't be severe.

The decision to plead guilty was made by Griner alone, a source close to her has said. But in recent weeks, Griner, her family, lawyers and experts had discussed this decision extensively. Given the 99% reported conviction rate in Russian criminal cases, Griner was urged to weigh all the factors, including a plea that could ultimately result in a shorter sentence.

Some have speculated Griner could be released and returned to the US in a prisoner swap, as was Trevor Reed, an American veteran detained in Russia for three years before his release in April.

Still, before any potential prisoner swap, it was expected Griner would have to be convicted and also admit fault, a senior US official has told CNN. Reed had to sign a document saying he was guilty -- something he had resisted for almost the entirety of his detention -- just days before he was let out, the official said.

'Please don't forget about me'

Many in the WNBA, along with other athletes, coaches and politicians, have called for Griner's release. Griner wrote a letter to President Joe Biden that was delivered to the White House this month, saying she fears she will be detained in Russia indefinitely.

"I realize you are dealing with so much, but please don't forget about me and the other American Detainees. Please do all you can to bring us home," Griner wrote. "I voted for the first time in 2020 and I voted for you. I believe in you. I still have so much good to do with my freedom that you can help restore."

Griner has some supporters in Russia, where she played during the WNBA offseason. A former teammate along with the director of UMMC Ekaterinburg -- the team Griner played with in western Russia until her contract expired after she was detained -- testified at an earlier hearing.

"Brittney has always been a good teammate, which is why my role here is to support her and be there for her," team captain Evgeniya Belyakova said after the hearing.

Belyakova, a past captain of the Russian national team, added, "We miss her and her energy so much. I was very glad to see her. I hope the process ends soon and ends well."

This story has been updated with additional developments and background information.