Britain thinks it can out-vaccinate the Delta variant. The world isn't so sure 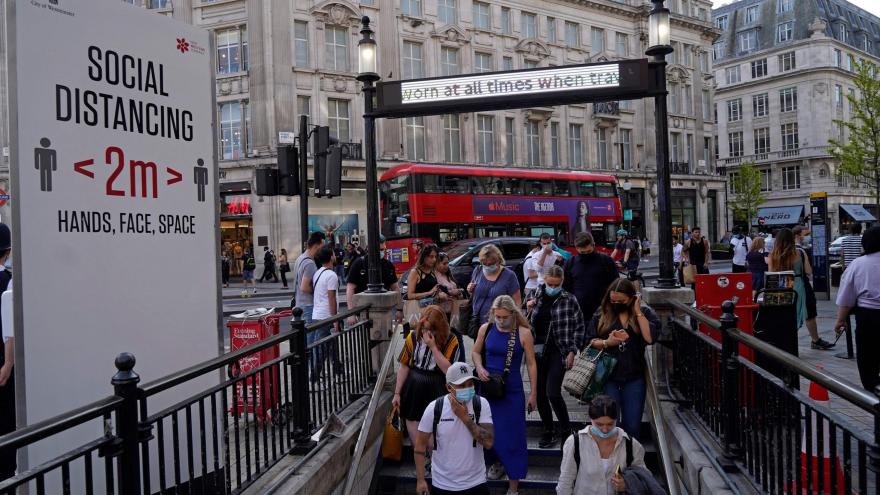 (CNN) -- When the United Kingdom emerged from one of the world's longest and most stringent coronavirus lockdowns in April, it did so believing that the worst of the pandemic was over.

Prime Minister Boris Johnson touted the successes of the country's vaccination rollout, and promised a "cautious but also irreversible" roadmap that would culminate on June 21, when the country would lift virtually all restrictions and return mostly back to normal.

But that date was delayed, and normal still feels some way off in the UK.

Despite boasting an inoculation program that has now fully vaccinated nearly two thirds of British adults, the country is heading towards a potential third wave of Covid-19.

Nearly 120,000 cases have been reported in the past week, up by 48,000 on the previous seven days. Schools are becoming increasingly concerning breeding grounds for the virus.

Hospitalizations and deaths are also ticking back up, though so far at a significantly slower pace -- indicating the benefits of the vaccine, but highlighting too the unpredictability of a new era of the pandemic in the UK.

Driving the surge in cases is the Delta variant, first identified in India, which amounts for almost every current infection of Covid-19 in Britain.

Britain therefore provides a vital test case for the world in the closely watched battle between vaccines and variants: the first example of a highly vaccinated major nation tackling a spike of this more transmissible new strain of Covid-19, without imposing new restrictions on the population.

"This variant has the potential to change the shape of the pandemic in your country," Deepti Gurdasani, a senior epidemiology lecturer at Queen Mary University of London, told CNN. "Once this variant enters a population, it's easy to lose control of it."

The impact of vaccines in Britain is clear; those hospitalized and driving the spread are generally younger -- and therefore less likely to have had both doses -- than at previous points in the pandemic.

A study by Public Health England (PHE) found this month that the Pfizer-BioNTech and Oxford-AstraZeneca vaccines are each highly effective -- at 96% and 92% respectively -- against hospitalizations from the Delta variant after two doses.

And an analysis of hospital admissions by PHE found similarly high levels of protection among fully-vaccinated people.

With vaccines now being offered to all those age 18 and over, the country's new health secretary, Sajid Javid, has said he sees "no reason" to push back the new opening-up date of July 19. Johnson said on Monday it is "very likely" the UK "can go back to life as it was before Covid, as far as possible" on that date.

But several countries are taking no chances, imposing strict rules on British travelers in an attempt to keep the variant away. When Germany reopened its borders to fully vaccinated travelers last week, Britain was kept off the list. Hong Kong followed suit on Monday, classifying the UK as an "extremely high-risk" location.

In Britain, a number of experts worry that vital lessons about the Delta variant are being ignored -- and they are urging other countries to watch the UK closely, as Delta becomes the dominant strain of Covid-19 worldwide.

And its stubbornness even in a country where nearly half of the population is fully vaccinated has left experts urging a more holistic approach.

"What we're seeing is the dangers of a vaccine-only strategy," Gurdasani said. "Vaccines are a hugely important part of our response, but we do need to protect our vaccines, and we need to reduce transmission."

'The link is weakened'

The Delta variant is now almost entirely driving Covid-19 transmission in Britain, but the lessons the world can learn from the UK are far from theoretical.

The strain may already account for 1 in every 5 infections in the US, experts say, and officials there are rethinking some measures even for vaccinated people as they brace for the strand to become dominant. German Chancellor Angela Merkel meanwhile warned late last week that the European Union was on "thin ice" in the fight against the Delta variant, with the highly infectious strain threatening to undo the continent's progress in reducing infections.

The speed with which Delta cases can accelerate is perhaps the most glaring message. The most recent seven-day rolling average of daily new infections in the UK is just under 17,000; up from 4,700 at the start of June.

But a rise in infections was expected after 17 May, when hospitality reopened in England and rules on social mixing indoors were relaxed.

Experts are more closely watching what impact those new cases are having on hospitalizations and deaths; and while both are ticking up, the data shows the impact of vaccinations.

"It's very different to what we saw in January to March" during the UK's second wave, said Tim Spector, an epidemiologist and the principal investigator of the PREDICT studies and the ZOE Symptom Study app, which track the status of Covid-19 in the UK.

"Both deaths and hospitalizations (are) still a fraction of what they were for the same level of new cases" at the start of the year, he told CNN.

"We are still hardly seeing anybody who's fully vaccinated going to hospital -- it's a really tiny fraction," he said, adding that vaccines are "definitely breaking that link" between infection and serious disease.

A seven-day rolling average of 222 patients are being admitted to UK hospitals with the coronavirus each day, according to the most recent complete data last week. While that represents a rise compared to April and May, it is a long way from the 4,000 people entering hospitals every day with Covid-19 in January, at the height of the UK's winter peak. Cases, meanwhile, are at about a quarter of that peak.

Vaccines, which were made available to the oldest and most at-risk earlier in Britain, have also led to a change in who health care staff are treating. Throughout the majority of the pandemic, older people have been most seriously affected by Covid-19; but in the first six days of June, only 148 people over 65 were admitted to UK hospitals. More than twice as many adults under the age of 54 were admitted -- 337 -- in the same time period.

"Vaccinations are working -- but you're seeing rises in age groups that are either less protected, or unprotected," Gurdasani said.

Nonetheless, even a more marginal strain on Britain's health care system could have serious consequences. Most doctors think that the NHS will take at least 18 months to recover from the pandemic, which has put staff under strain and created a huge backlog of non-Covid patients, according to a survey of members of the Royal College of Physicians (RCP).

"Our NHS is devastated after two waves, and we have so much care pending -- any amount of excess pressure at this time is not acceptable," Gurdasani added.

People may be unknowingly infected

With the Delta variant taking hold in Britain, experts are also urging the government and the public to change their perception of Covid-19.

The experts point to emerging evidence that people are reporting different symptoms than last year.

"What we're seeing now is many people with flu-like symptoms or even hay fever-like symptoms," said Gurdasani. "We need to really broaden our testing criteria and communicate this to the public. Many people might be getting infected without having any awareness of it."

Some of those symptoms were associated with Covid-19 last year, and other countries have included a wider range of ailments as being possible signs of a coronavirus infection; the United States Centers for Disease Control and Prevention (CDC), for example, includes a runny nose, sore throat and fatigue among its 11 official symptoms.

But in the UK, the three official Covid-19 symptoms that should trigger a test have remained the same since early in the pandemic; a fever, cough, or change in one's sense of taste or smell.

That strays from the data on Spector's ZOE app, which asks users to input their experiences with Covid-19 and shares data with King's College London and the NHS. The most common reported symptoms there are now headaches, a runny nose, sneezing and a sore throat.

"We're seeing very different symptoms, and so many people will not realize they are getting Covid depending on the public health messaging," Spector said. "We're not seeing loss of smell now nearly as often as it was previously -- we don't quite know why that is."

'A virus of younger people'

Back in Britain, as the virus shifts in prevalence toward younger age groups, experts are urging focus on a new primary battleground for transmission: schools.

"There is clearly a lot of transmission happening inside of schools -- we don't have mitigation that deals with that," Gurdasani said.

One in 30 pupils at state schools in the UK missed school for Covid-related reasons in the second week of June, the UK's Department of Education said, up from 1 in 83 the previous week. Those reasons include infection or requiring to self-isolate due to close contact with a person who tested positive.

But a mask mandate inside classrooms was lifted in May by the government, and some fear a current lack of restrictions needs urgent review.

"This is now becoming a virus of younger people, and we are letting that happen by not preventing transmission in those settings," said Gurdasani. Recent outbreaks of the Delta variant in schools in Israel -- another country with high vaccinated rates -- has fueled concerns further.

"We need to refocus our entire strategy on reducing transmission," Gurdasani said. "All countries need to have long term focus on masks and ventilation, (and to) clamp down on outbreaks as they occur."

As more information about the variant is gathered, Brits are finding themselves shut out of a growing list of countries. Hong Kong said it would ban flights from the UK from July 1, joining nations in Europe in taking a cautious approach.

Portugal has toughened its quarantine restrictions after British travelers flocked to the country from May, when it became one of the few nations added to the UK's "green list" of tourist destinations.

And German leader Merkel is leading a push to impose similar restrictions across the EU. "In our country, if you come from Great Britain, you have to go into quarantine -- and that's not the case in every European country, and that's what I would like to see," she told Germany's Parliament last week, Reuters reported.