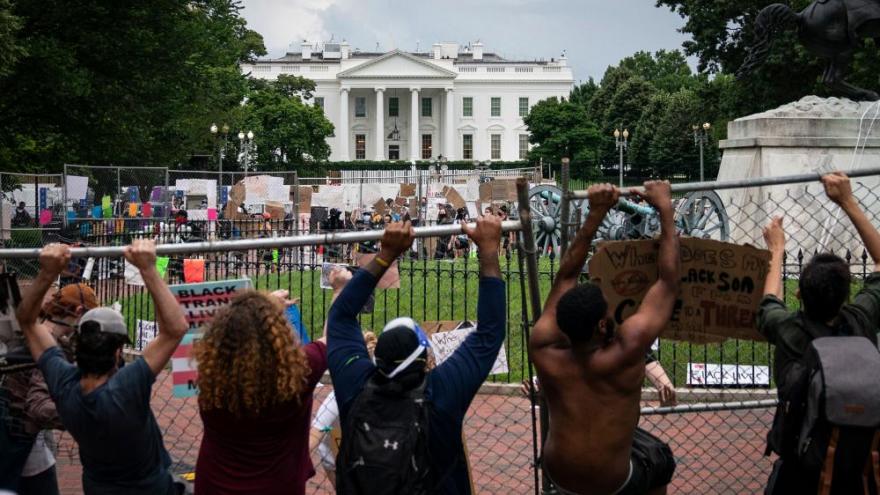 A brief feud bubbled up this week between law enforcement agencies in Washington, DC, after the mayor and local police said the district's federal prosecutor was not charging violent "outside agitators" who interrupted peaceful protests.

(CNN) -- A brief feud bubbled up this week between law enforcement agencies in Washington, DC, after the mayor and local police said the district's federal prosecutor was not charging violent "outside agitators" who interrupted peaceful protests.

The ongoing demonstrations in the district stem from the death of George Floyd, who was killed at the hands of a police officer in Minneapolis in late May, triggering worldwide protests over police brutality and systemic racism.

"Outside agitators" were "armed for battle" when they arrived in the city late last month and were looking to confront police officers, Mayor Muriel Bowser said Monday.

"We don't know who they are, but we know they came together to create havoc," she said. "They are not the same as our residents who say 'Black Lives Matter.' "

Metropolitan Police Chief Peter Newsham said 68 felony warrants are with the US attorney's office and awaiting prosecution, including three involving assault on a police officer.

"Right now there is no accountability for the people who came to these protests and attacked our police and we haven't seen a willingness from the US attorney to prosecute them," Bowser said. "We need the federal government to do its job and prosecute these people."

US Attorney Michael Sherwin, however, clapped back at Bowser for suggesting there was a reluctancy to prosecute the alleged agitators. Bower's public statement, he said, "is patently false and serves no purpose other than to pass blame and foster innuendo." He suggested that the police were arresting people without "sufficient evidence to support probable cause."

Following a meeting on Wednesday with Newsham, Sherwin seemed to have walked back his comments from earlier in the week and said in a letter Thursday that his office "needed certain additional information to be reflected in the supporting affidavits to proceed with criminal charges."

"I know that we are all committed to protecting the safety of the district's residents in the face of mob violence, much of which is being instigated by outsiders. I think we are now on the same page and will be working effectively together going forward," Sherwin wrote.

CNN has reached out to the US Attorney's office and the Metropolitan Police Department for additional comment.

Demonstrations in the city flared in the immediate aftermath of Floyd's death, and police at times responded with tear gas and pepper spray. Protests have continued sporadically throughout the summer.

A report released this week by the Armed Conflict Location & Event Data Project and the Bridging Divides Initiative at Princeton University found that about 93% of racial justice protests in the US since the death of Floyd have been peaceful and nondestructive.