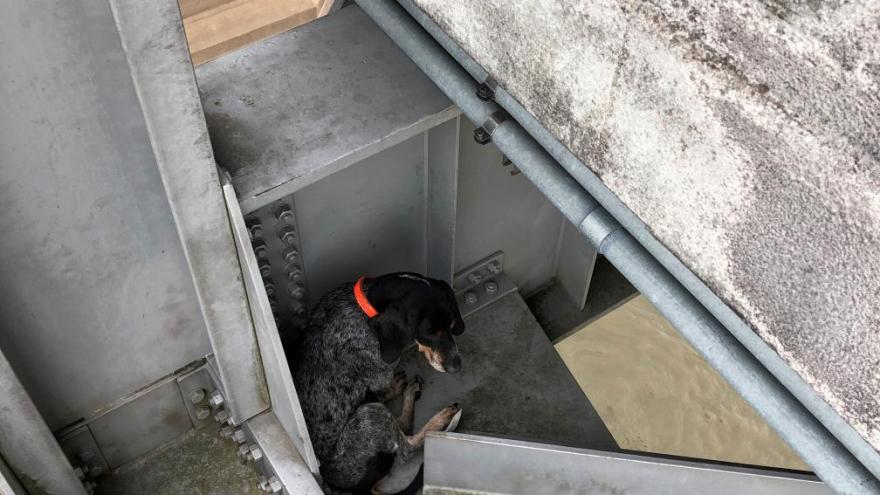 The dog found herself stranded above the Mississippi River.

(CNN) -- An ordinary workday quickly turned into a rescue mission after a bridge inspector spotted a stranded dog 120 feet above the Mississippi River.

Ryan Nataluk was working alongside his crew on Sunday afternoon when Craig Jenkins, one of his bridge inspection engineers, noticed something out of the ordinary on the Natchez--Vidalia Bridge.

"Craig called over the radio, "I see a dog!" said Nataluk. "We've never seen a live dog before so at first I thought it was a raccoon."

After a second look, it was most definitely a dog that somehow managed to get stuck on a lower chord of the bridge. Nataluk described the pup as shy at first, but she eventually warmed up after realizing he was there to help.

Nataluk, who is a vice president and lead engineer for the company Stantec, has been inspecting and climbing bridges for more than 23 years. He also spends his spare time mountain climbing. So when it came to rescuing the pup, he didn't even think twice about it."

"I go camping and climbing all over with my family and dog," said Nataluk. "I've had to bring my own dog across rivers and even haul him up peaks and overtime I've figured out how to make makeshift harnesses."

Little did he know, such experience would come in handy. After alerting police, Nataluk jumped into action for the impromptu rescue. He used a piece of chord that he fashioned into a harness to make sure she would be secure.

His company tweeted a video of the rescue and described the moment as being "in the right place at the right time!"

Nataluk says he climbed down onto the bridge deck and placed the dog in the harness. The video then shows him working with officer John Fenly to pull her up to safety.

He says he was concerned that she may have been injured but those fears quickly subsided.

"When we got her up there she just started walking immediately and wagging her tail," said Nataluk. "You could tell she was really happy."

He said the crew joked about him taking her back home with him to Colorado, but fortunately someone else wanted to claim her.

The Natchez Police Department said the dog was adopted soon after her rescue.

"She is a very fortunate dog," said Police Chief Walter Armstrong. "They need to name her, 'Lucky.'"