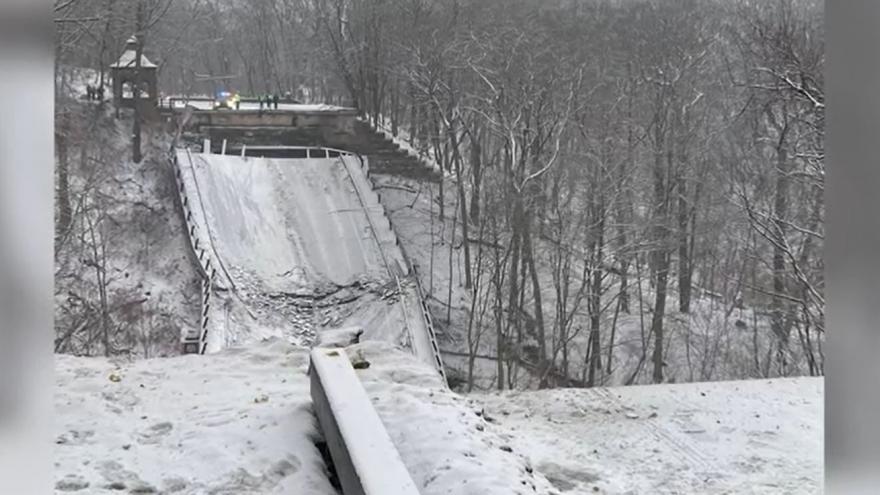 Greg Barnhisel tells CNN he lives close to the area of the bridge collapse so they went to check it out by foot.

(CNN) -- Ten people were injured when a snow-covered bridge in Pittsburgh collapsed Friday morning, hours ahead of a previously scheduled visit to the city by President Joe Biden to discuss infrastructure.

No fatalities have been reported, Pittsburgh Mayor Ed Gainey said in a news conference at the scene in the area of Forbes and Braddock avenues.

Fire Chief Darryl Jones characterized the injuries as "minor," and said three people were transported from the scene. None of the injuries were life-threatening, he said.

The cause of the collapse is under investigation, he said. The National Transportation Safety Board has a team on site and is bringing in a crash reconstructionist who will map the scene with a drone. Once the mapping is done, authorities will remove vehicles and debris from the scene.

First responders used ropes to rappel down to get to the victims, Jones said. Crews also used what he called a "daisy chain" where they linked hands to reach the victims and pull them out.

President Biden visited the site of the collapse Friday afternoon as he proceeded with his trip. Prior to his arrival, the President called Pennsylvania Gov. Tom Wolf and Mayor Gainey, White House principal deputy press secretary Karine Jean-Pierre told reporters.

"I've been coming to Pittsburgh a long time, and as a former Pennsylvanian ... I didn't realize that there are literally more bridges in Pittsburgh than in any other city in the world," Biden said, adding, "We're going to fix them all."

"There's 43,000 nationwide," he said, referring to the number of bridges in poor condition across the country. "And we're sending the money."

In an interview with CNN, Pittsburgh City Councilmember Corey O'Connor said it was fortunate the collapse didn't happen later in the morning, when there likely would have been far more traffic on the bridge.

"If this would have occurred an hour later, this is a road that gets probably about 15,000 cars on it a day, and if it was rush hour, we would be looking at a couple hundred cars down in that valley," he said. "We got very, very lucky today, and hopefully those individuals at the hospital recover quickly and they're home safe in the next couple days."

The Allegheny County Police Department was notified about a partial bridge collapse sometime after 6 a.m. on Friday, according to Amie Downs, a spokesperson for the county.

Only minor injuries have been reported, including the driver of an articulated bus and two passengers, Downs said.

The collapse also caused a natural gas line in the area to break, Downs said, but the line has since been turned off. There are some reports of people feeling ill in the area from natural gas, Downs said, and those individuals are being treated on the scene.

There is no evidence at this time there was a gas explosion prior to the collapse, Kukovich said. He described the gas line as a distribution line but said it was not a high pressure gas line.

Peoples Gas crews are on the scene assessing the situation, Kukovich said, and nearby customers are experiencing "minimal service interruptions."

Bridge is a 'vital artery' for the area, official says

According to CNN Meteorologist Brandon Miller, a light snow was falling Friday morning in Pittsburgh, though only one to two inches had accumulated since it started around 2 a.m. ET. Light snow is expected to continue on and off through Friday afternoon, though not much more accumulation is anticipated.

The weather is not directly related to a strengthening nor'easter off the US East Coast, Miller said, but a separate system dropping in from the north.

In an interview on CNN's "New Day," Pennsylvania Lt. Gov. John Fetterman called the bridge a "vital artery" in the Pittsburgh area. The bridge crosses Frick Park, one of the city's largest parks.

"Thankfully, schools were on a two-hour delay for weather," he said, "so the traffic was less than it would have been normally on a normal day, but it's surreal to see this bridge."

Asked about the collapse coming the same day of the President's visit, Fetterman, a Democrat, said, "This is a horrible way to underscore just how critical our infrastructure needs are in this country."

Jeremy Habowski told CNN he feels lucky to be alive after surviving the collapse. He and other drivers were unable to stop in time after the bridge gave way, he said.

"The scariest part was definitely going over the edge because there was a gap and my car left the ground," he told CNN. His car and others are now sitting on top of what remains of the bridge.

Once things settled, Habowski checked on another driver, he said. Then he climbed up the hill to try and stop other drivers from driving into the debris.

Greg Barnhisel lives about a quarter-mile from where the bridge collapse, so he and his wife went to see it on foot, he told CNN.

"We didn't hear it collapse," he said. "When we got to the site of the collapse, the roaring sound and the smell of the broken gas line were overwhelming."

Another nearby resident, Wendy Stroh, told CNN affiliate KDKA she heard the collapse, but thought it sounded like "a huge snowplow pushing along a raw tarmac surface with no snow."

"It's very frightening," she said. "My goodness, all these ambulances and fire trucks and what not. Just the thought of the bridge collapsing is a very scary prospect. I cross that bridge all the time."

Allegheny County Executive Rich Fitzgerald said normally there are a lot of people walking or jogging on trails under the bridge, but no one was there because of the weather and time of day.

"It's incredible to think that nobody was more seriously injured and quite frankly killed," Fitzgerald said. "We got to fix these things because one of these days our luck is going to run out."

In Friday morning's news conference, Mayor Gainey said the bridge had last been inspected in September 2021.

In an interview with CNN, Jones, the fire chief, said the bridge was not a concern to officials prior to the collapse. The city's bridges are routinely inspected, he said, and "if there was any warning or concern, we would have been notified and we would have made sure that we didn't use this route."

"So this one caught everybody by surprise this morning," he said.

However, while the fire chief said the bridge had not been a concern for city officials, it had received an "overall condition" rating of "poor," according to the website for the Pennsylvania Department of Transportation, which tracks bridges across the state.

The 447-foot bridge was built in 1970 and composed of a steel rigid frame, according to the website.

According to PennDOT, a bridge's condition "is determined by the lowest condition rating of the primary components of a bridge or culvert."

O'Connor said some "rehab" had been done to the bridge a couple years ago, including repaving the surface.

"But again, we are the City of Bridges. There are so many bridges in the city, in the county that we live in, and this infrastructure bill -- you talk about irony, the President's coming to talk about infrastructure -- we need it," the council member said.

In a statement, Fetterman, the lieutenant governor, called the collapse Friday "just the latest in a long line of preventable, man-made disasters that prove what so many of us in Pennsylvania have been saying for years: Our infrastructure is failing our people."

"In Pittsburgh, in Pennsylvania, and across America," the lieutenant governor said, "we cannot afford neglect any longer. It's time to rebuild this nation."

In the meantime, rebuilding the bridge could take "at least a year," Allegheny County Executive Rich Fitzgerald told CNN, citing a best-case scenario estimate by state engineers from PennDOT. He called it a "major, major inconvenience" for the people who rely on the bridge.