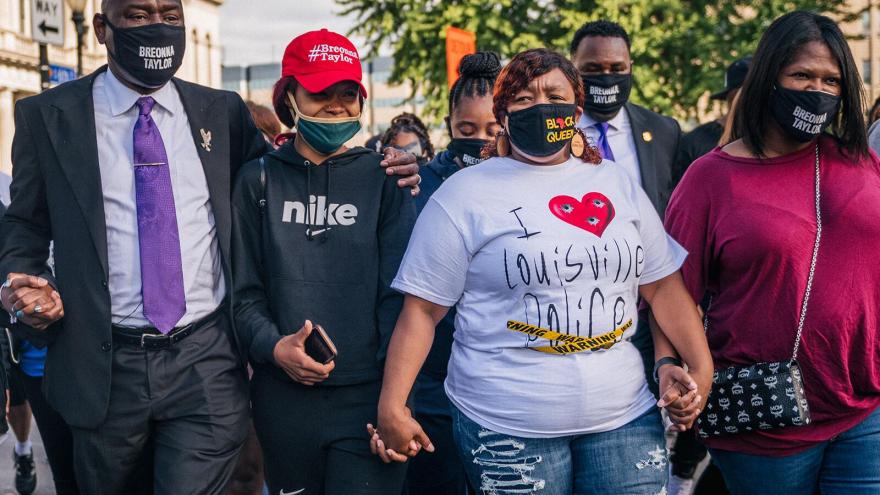 (CNN) -- Breonna Taylor's family says they're heartbroken and outraged following the Kentucky attorney general's announcement that no officers are being charged directly in the killing of the 26-year-old aspiring nurse.

"I was reassured Wednesday of why I have no faith in the legal system, in the police, in the law -- that are not made to protect us Black and Brown people," Tamika Palmer, Taylor's mother, wrote in a letter that was read out loud in a news conference Friday.

Wednesday's announcement sparked public outrage and reignited protests in Louisville and across the country. Before that, crowds gathered for months in Louisville to call for the arrests of the three officers involved.

But the investigations in Taylor's case are far from over, and family attorneys say they're not giving up hopes for justice as they call on Kentucky Attorney General Daniel Cameron to release evidence from the grand jury proceedings.

The FBI announced in May it was investigating the circumstances surrounding Taylor's death and said this week that work continued "beyond the state charges announced." The agency has previously said it is taking a "fresh look" at all the evidence and interviewing witnesses as well as examining all the evidence.

Family attorney Ben Crump says he hopes the federal investigation "finally gets justice for Bre and her family."

His statement was reiterated by family attorney Lonita Baker, who also says she hasn't given up on state charges.

"We do hope there are federal civil rights violation charges brought as well. But again, we're not giving up on state level manslaughter or murder charges in the case of Breonna Taylor," Baker said. "We think they're warranted here, there's sufficient probable cause."

Protesters across the US have also echoed continued calls for justice following Wednesday's announcement.

Friday marked the third night of demonstrations in Louisville since the attorney general's announcement, and Taylor's family members -- including her mother -- joined the evening protest.

As Palmer walked with the crowd, Taylor's aunt and several other women held a banner at the front of the march bearing the words "Justice for Breonna."

In a news conference Saturday, LMPD Interim Police Chief Rob Schroeder acknowledged that police used aerial flash bangs at one point Friday to get protesters' attention to order them to disperse. He said the flash bangs were necessary because some demonstrators could not hear officers' instructions.

In a news conference Saturday, Mayor Greg Fischer said protests had been largely peaceful and thanked demonstrators who honored a nightly curfew from 9 p.m. to 6:30 a.m.

The curfew remains in effect Saturday night, Schroeder said. Mayor Fischer said Saturday his office would monitor protests Saturday before deciding whether to extend the curfew beyond the weekend.

On Thursday, among two dozen people arrested during the demonstrations was Kentucky state Rep. Attica Scott, the state's only Black female legislator.

The department said more than 250 people participated in the protest, adding "the group was immediately violent throwing bottles & cans at officers." OPD said it responded by deploying "minimal smoke."

There were no reports of damage to businesses, according to police.

Calls for grand jury transcripts to be released

Crump, the family attorney, has called on the Kentucky attorney general to release transcripts of the grand jury proceedings, which led to no charges directly in Taylor's death, more than six months after police shot her in her home while executing a search warrant.

There is "no conclusive evidence" any of those bullets hit Taylor, Cameron said.

Crump said he and Taylor's family were confused as to what Cameron presented to the grand jury.

"We are demanding that the transcripts are released so we can see if anybody in that grand jury proceeding from Kentucky Attorney General Daniel Cameron's office presented evidence on behalf of Breonna Taylor," Crump told CNN Saturday.

"Because if they didn't," he added, "then they unilaterally made a decision to exonerate these police officers for killing her and to make sure she wouldn't get her day in court, that she wouldn't get justice."

On Friday night, Baker also called on the attorney general to be "straight forward," saying he "dodged" questions during his news conference earlier this week on whether he presented charges in connection to Taylor's killing.

"If it did not go before grand jury, that's a true travesty of justice and we would demand that a special prosecutor be appointed in that case," Baker said.

CNN has reached out to Cameron's office regarding calls to release the grand jury transcripts but has not heard back.

Calls for the release of grand jury information have been echoed by others, including Kentucky Gov. Andy Beshear and Mayor Fischer.

"Obviously concerns over the decision are not going to go away so anything that can be done to make that decision more understandable is a good thing to do," Fischer said Saturday.

What led to Taylor's death

In March, Hankison, Sgt. John Mattingly and Detective Myles Cosgrove executed a search warrant on Taylor's home amid a months-long investigation that focused on her ex-boyfriend -- who was not at Taylor's apartment. He later told a Kentucky newspaper police used misleading and wrong information to obtain that warrant.

When officers arrived at the apartment, Taylor was sleeping next to her current boyfriend, Kenneth Walker III. He told investigators they both heard a noise and got up and walked to the door, where police forced entry into the home.

Walker said he fired one shot. Mattingly was shot in the leg, the attorney general said Wednesday.

Hankison was accused by his own department of blindly firing 10 bullets into Taylor's apartment from an outdoor patio. He was fired in June, the Louisville police chief said, and is appealing his termination.

Cameron said the officers were "justified in their use of force" because Taylor's boyfriend fired first.

Walker was unharmed but Taylor was shot multiple times and died in the shooting.

No drugs were found in the apartment and there is no police body camera footage of the incident.