Breonna Taylor's boyfriend says in $10.5 million lawsuit that he 'lives in constant fear' 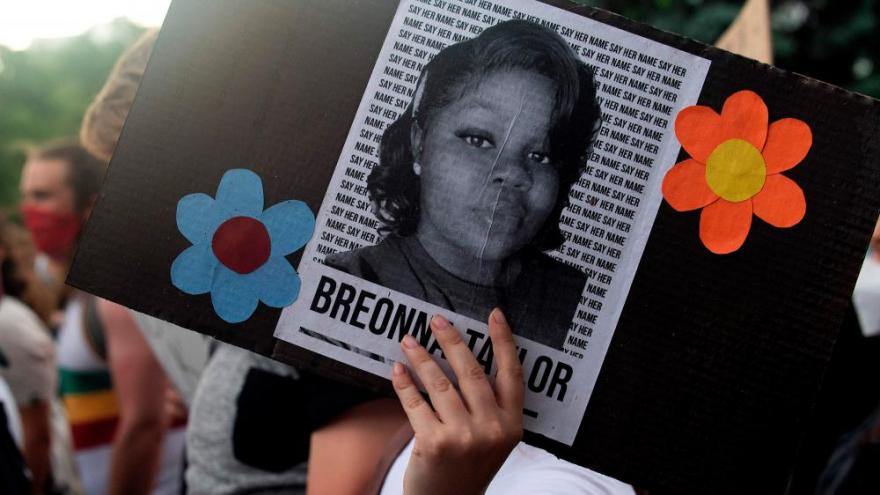 Kenneth Walker III "lives in constant fear" since he was arrested -- wrongfully, Walker says -- for allegedly shooting one of the Louisville, Kentucky, police officers who opened fire into Breonna Taylor's apartment while executing a "no-knock" search warrant, according to a lawsuit filed Tuesday.

(CNN) -- Kenneth Walker III "lives in constant fear" since he was arrested -- wrongfully, Walker says -- for allegedly shooting one of the Louisville, Kentucky, police officers who opened fire into Breonna Taylor's apartment while executing a "no-knock" search warrant, according to a lawsuit filed Tuesday.

Walker said in the $10.5 million lawsuit that he was maliciously prosecuted for firing a single bullet with his licensed firearm at "assailants" who "violently broke down the door" after midnight on March 13.

It turned out to be plainclothes officers from the Louisville Metro Police Department on the other side of the door, executing the warrant at Taylor's home. Taylor was killed in the subsequent hail of bullets.

Walker claims in the lawsuit at least three officers fired a total of 35 or more shots. The estimation is based on how many bullets the officers could have fired, Walker's attorney Steven Romines said.

The exact number of bullets has not been disclosed from the pending criminal and civil rights investigations.

"The charges brought against me were meant to silence me and cover up Breonna's murder," Walker said Tuesday.

Walker, 28, who according to the lawsuit is a licensed gun owner, should not have been arrested for allegedly shooting Sgt. Jon Mattingly in the thigh, according to Romines. Walker was charged with attempted murder, but that charge was later dropped, pending the outcome of what Kentucky Commonwealth Attorney Tom Wine called "additional investigation" by the state and FBI.

"I was raised by a good family," Walker said. "I am a legal gun owner and I would never knowingly shoot a police officer."

The lawsuit cites the "stand your ground" law in defending his client's actions that day.

"Kenny was clearly acting in self-defense, that he had every right to do, and they knew that, yet they charged him anyway because if he's convicted it justifies their actions," Romines said.

In a timeline of the Taylor case, Louisville Mayor Greg Fischer's office says when police executed the warrant, "The officers said they knocked and announced themselves before breaking down the door" and Walker "has said he heard pounding at the door, but did not hear anyone announce they were police."

The suit, filed in Jefferson Circuit Court, names as defendants the Commonwealth of Kentucky, the Louisville/Jefferson County metro government and members of the police department.

In a statement, a spokesperson for Wine noted that the Commonwealth Attorney was not sued by Walker.

"What he (Walker) is trying to do now with this lawsuit is use it to foreclose the possibility of being charged again," said spokesperson Jeffrey Cooke.

Fischer also addressed the lawsuit Tuesday at a news conference.

"Relative to the lawsuit filed today by the attorney, I have not seen that or aware of that so will have to hold comment on that until I am able to review it and see what's taking place there," Fischer said.

According to a police affidavit for a search warrant for the raid, which was obtained by CNN, police said a man was shipping drugs to Taylor's apartment to avoid detection of a trafficking ring.

The search warrant authorized the police to search Taylor's apartment, two vehicles, and three people, including Taylor, and to seize, among other things, drugs and drug paraphernalia, money, safes, weapons, documents and computers. The warrant did not specifically connect Taylor to any alleged drug activity.

Romines said the arrest of Walker was a "cover up for their misconduct."

"How can you be conducting raids like this, with this type of force, and you don't even know how many people are in the house?" Romines told CNN.

CNN has previously reported a key miscalculation by police who assumed Taylor was home alone the night of the raid.

Taylor's family has filed a wrongful death lawsuit against the officers, saying she was shot at least eight times. LMPD has declined comment, citing the ongoing investigation and pending litigation.

Walker, meanwhile, "lives in constant fear," according to the lawsuit.

"Kenny Walker talks about the fear that he has as a young Black man that has multiplied times a thousand since this incident," Romines said. "They could re-indict him at any time and show up at his house and take him into custody."