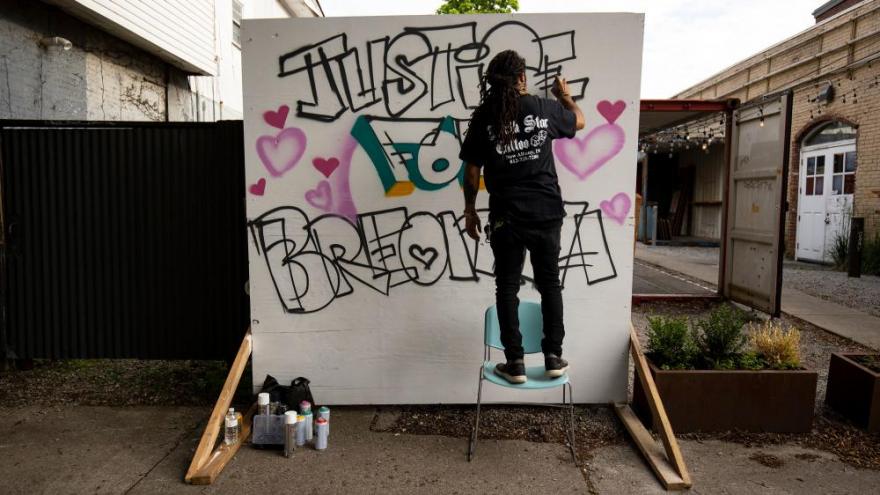 (CNN) -- The detective who applied for the warrant that ended in the March shooting death of Breonna Taylor has been placed on administrative reassignment, the Louisville, Kentucky, interim police chief said.

Police shot the 26-year-old EMT at least eight times after breaking down the door of her apartment in an attempted drug raid. Recent protests in the city have called for justice in her death.

The Taylor family, their attorney, the US postal inspector and others have raised questions about how and why the warrant was approved, Louisville Metro Police Interim Chief Robert Schroeder said Wednesday.

Schroeder added that the detective who applied for the warrant has been put on administrative reassignment until those questions can be answered.

"This is all part of the process of getting to the truth of what happened that night and leading up to that night," Schroeder said.

The matter has also been referred to the FBI, he said.

The action "further" proves "our position that everything about the search warrant needs to be scrutinized," said Lonita Baker, an attorney for the family. Taylor's family has filed a lawsuit alleging battery, wrongful death, excessive force, and negligence and gross negligence.

Police in January had tracked two people between a suspected drug house and Taylor's residence, ultimately leading authorities to execute a warrant at her home, according to a police affidavit for a search warrant for the raid obtained by CNN affiliate WAVE and reviewed by CNN.

The warrant does not specifically connect Taylor to any alleged drug activity.

Baker said Taylor was never involved in narcotics and disputed the facts of the warrant, saying it was "based on lies of LMPD."

The warrant alleged that one of the men may have been keeping narcotics and/or proceeds at Taylor's address. Police had said they verified through multiple databases that Taylor lived at that address. Police also said they verified through a US Postal Inspector that the man had been receiving packages at Taylor's home and as of February 20, he used the location as his home address, according to the warrant.

Baker pointed to an article published by CNN affiliate WDRB in which Louisville Postal Inspector Tony Gooden said Metro police did not use his office to verify that a drug suspect was receiving packages at Taylor's apartment.

Gooden said it is "possible" that the police had asked a mail inspector from another jurisdiction of the US Postal Inspection Service for help, but added that his office almost surely would have been notified of an outside agent's involvement, WDRB reported.

CNN is attempting to reach Gooden.

The "no-knock" entry was requested for the premises "due to the nature of how these drug traffickers operate," having "a history of attempting to destroy evidence, have cameras on the location that compromise detectives once an approach to the dwelling is made," and "have history of fleeing from law enforcement," the warrant said.

The warrant was signed on March 12. Taylor was killed the following day.

The department has said the officers announced themselves and returned gunfire from her boyfriend, Kenneth Walker.

The FBI said last month it had opened an investigation into Taylor's death.

Schroeder said he recognizes that the process is taking longer than many want, but it's what must be done to ensure a thorough and fair investigation.

Louisville Mayor Greg Fischer on Wednesday announced a process for finding a new police chief that could take as long as six months, using input from community members and assistance from a DC-based non-profit.

The former police chief was fired last week after officials discovered two police officers involved in the fatal shooting of a man during a protest over police brutality had not activated their body cameras.

The process to contract an outside firm to do a comprehensive "top to bottom review of LMPD is already underway" the mayor said, and the proposal deadline was extended until June 16.

It's time to "rethink many of the structures that have produced much of the pain that we're seeing here in Louisville and around the country," Fischer said.