Boy Scouts of America files for bankruptcy. Hundreds of sexual abuse lawsuits are now on hold 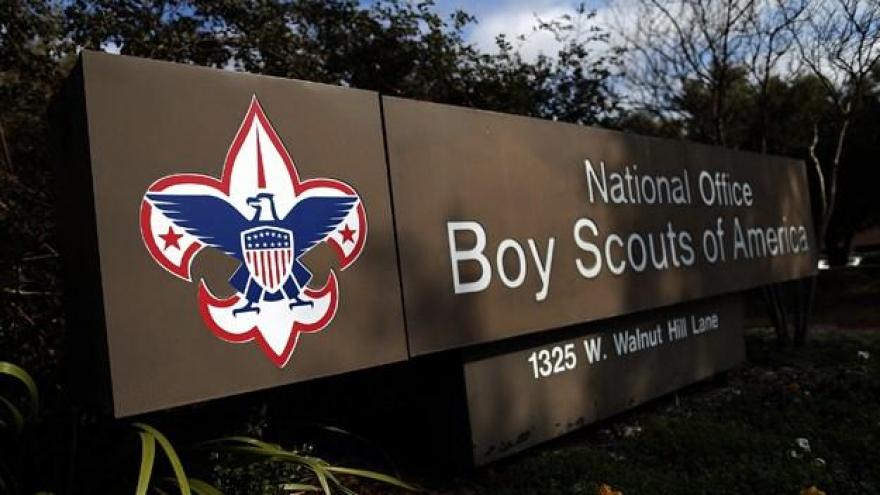 The Boy Scouts of America has filed for bankruptcy, according to a court document filed in Delaware bankruptcy court.

(CNN) -- The Boy Scouts of America has filed for bankruptcy, according to a court document filed in Delaware bankruptcy court early Tuesday.

The youth organization, which celebrated its 110th anniversary February 8, listed liabilities of between $100 million and $500 million and estimated assets of $1 billion to $10 billion.

The bankruptcy filing comes at a time when the organization faces hundreds of sexual abuse lawsuits, thousands of alleged abuse victims and dwindling membership numbers. As a result of the filing, all civil litigation against the organization is suspended.

"These young boys took an oath. They pledged to be obedient, pledged to support the Scouts and pledged to be honorable. Many of them are extremely angry that that's not what happened to them and the Boy Scouts of America did not step up in the way they should have," Mones said.

The Boy Scouts of America faced hundreds of lawsuits from alleged sexual abuse victims across the country -- all of which are now suspended because of the bankruptcy filing.

"We believe victims, we support them, we pay for counseling by a provider of their choice and we encourage them to come forward. It is the Boy Scouts of America (BSA) policy that all incidents of suspected abuse are reported to law enforcement," the organization said.

Last April, exposed court testimony showed the organization believed more than 7,800 of its former leaders were involved in sexually abusing more than 12,000 children over the course of 72 years.

Mones, who was part of a legal team that won a $18.5 million verdict against Boy Scouts of America for former Scout and sexual abuse victim Kerry Lewis in 2010, said Monday that instead of potentially having their day in court, alleged victims who had pending lawsuits will now need to file claims in bankruptcy court.

Michael Pfau, a Seattle-based attorney whose firm represents 300 alleged victims across the country, said the bankruptcy claims process will be decidedly different for those suffering due to the Boy Scouts of America's alleged inaction.

"They won't have to give depositions involving their life history. Their lives won't be scrutinized, but they lose their right to a jury trial. For a lot of abuse survivors, telling their story in a court of law and forcing the organizations to defend their actions can be cathartic. That won't happen with a bankruptcy," Pfau said.

Mones said in the aftermath of the Lewis case, his law office received hundreds of phone calls from adult males claiming to have been Boy Scouts of America sexual abuse victims, but many states had statutes of limitation that narrowed their legal options at the time. It wasn't until years later, when some state legislators enacted new laws that enabled victims to file lawsuits without limits on when the alleged abuse took place, that a barrage of complaints against the youth organization were filed.

Pfau estimates the number of claimants will eclipse those of the Catholic church.

"The Catholic bankruptcies are limited in geographic scope. Here there will be claimants from all 50 states and the American territories," Pfau said. "We can talk about files and numbers, but in reality if you step back and realize the scope of the human carnage, it's stunning."

New members, a new president, and a new partnership

Reports of a bankruptcy filing swirled as early as December 2018, when The Wall Street Journal reported the Boy Scouts of America ad hired the law firm Sidley Austin LLP for possible Chapter 11 bankruptcy filing assistance, but no official filing happened until Monday.

In the 14 months since then, the youth organization has allowed children who identify as girls to join the Scouts, a controversial move that was seen by some, including Girl Scouts of the USA President Kathy Hopinkah Hannan, as an attempt to raise their diminished enrollment numbers.

In August, the organization referred about 120 allegations of abuse by Scout leaders to law enforcement for further investigation, saying it believes victims and that the youth organization is working to identify "additional alleged perpetrators."

The Boy Scouts of America also named a new president, a former Scout himself who pledged to "move the organization forward."

Last week, the organization announced a partnership with 1in6, a leading organization for male survivors of sexual abuse, to expand their services and better support the needs of victims.

"We sincerely apologize to anyone who was harmed in Scouting," Boy Scouts of America CEO and President Roger Mosby said in announcing the partnership. "In addition to implementing strong policies to prevent abuse, we are dedicated to supporting victims when and how they need it."

For alleged victims, however, the organization's bankruptcy filing may represent another institution that failed to protect them and is avoiding taking responsibility for the abuse that happened under its watch.

"We need to make sure we receive some accountability and if (bankruptcy court) is how we have to do it, then so be it," Pfau said.

In an open letter to victims, Jim Turley, the national chairman of the Boy Scouts of America, wrote that the organization entered into bankruptcy to make sure it is able to equitably compensate all the victims of abuse.

"The BSA cannot undo what happened to you, but we are committed to supporting you and to doing everything in our power to prevent it from happening to others," Turley wrote.

The letter goes on to say that "the national organization of the Boy Scouts of America has initiated a voluntary financial restructuring to ensure we can equitably compensate all victims of past abuse in our programs, through a proposed Victim's Compensation Trust. I encourage you, and all victims to come forward and file claims so you can receive compensation from this Trust. We will provide clear notices about how to do so."