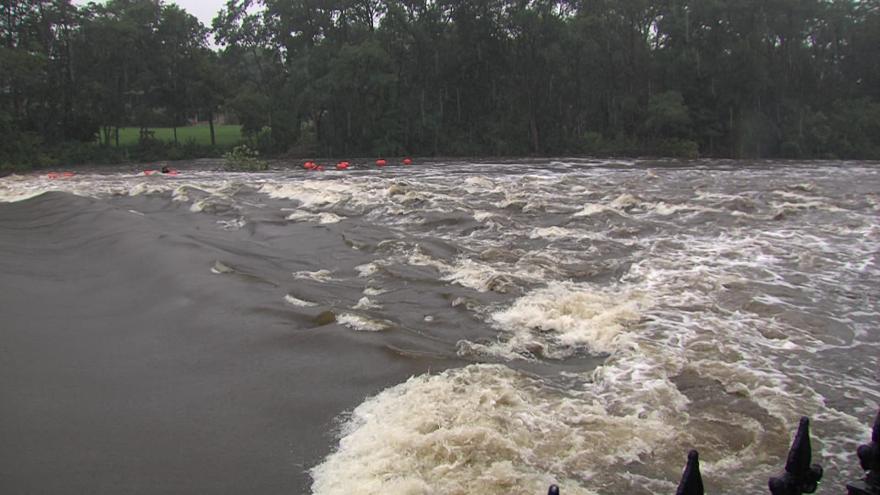 MILWAUKEE (AP) — An 11-year-old boy who nearly lost his life in a waterlogged drainage ditch in eastern Wisconsin was pulled to safety by an eagle-eyed firefighter, officials said, following another round of storms that pounded Wisconsin and southeastern Minnesota.

The boy who was swept into a storm drain was playing with friends after the rains passed around 6 p.m. Tuesday in the Village of Harrison. The Calumet County Sheriff's Office said the boy was in the flooded drainage ditch when he went under water and didn't surface.

The Calumet County dive team, sheriff's deputies and others searched the ditch and storm sewer. The boy managed to find an air pocket and was rescued after a firefighter some 30 feet (9 meters) away saw his finger poking through a manhole cover. The boy was taken to the hospital, and authorities said he was alert and conscious after his ordeal.

Wisconsin emergency officials said 20 counties have been affected by flooding over the last 10 days. Rainfall of 5 to 11 inches (13 to 28 centimeters) in western Wisconsin forced the evacuation of people from their homes in La Crosse, Vernon and Monroe counties. Officials have yet to say how many homes were affected by the floods.

The heavy rain affected transportation across the region.

The deluge stranded two Amtrak trains carrying about 400 passengers for hours because of flooding over the train tracks in southern Wisconsin. Both trains were forced to stop near Tomah in western Wisconsin and sat on the tracks overnight.

Wisconsin Emergency Management spokeswoman Lori Getter said the trains never lost power and that passengers were given food and water. Both trains were expected to resume their routes Wednesday, she said.

Parts of Interstate 90/94 were closed overnight due to standing water on the pavement.

Several tornadoes were spotted Tuesday afternoon in Campbellsport, Lomira, Oakfield and Brandon, Wisconsin, according to the National Weather Service. The service has not confirmed that tornadoes hit in any of these locations. Possible tornadoes also demolished two barns in Fond du Lac County, killing about 100 cattle, Getter said.

Some 12,000 We Energies customers were still without power Wednesday morning as utility crews worked overtime to restore service.