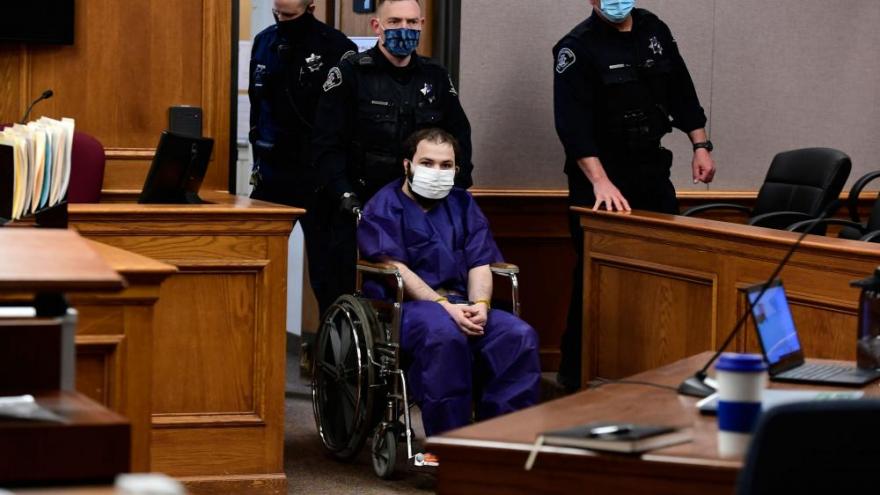 The man charged with killing 10 people in a Boulder grocery store has been moved out of county jail after officers became aware of "threats toward him" from other inmates, a jail official told CNN.

(CNN) -- The man charged with killing 10 people in a Boulder grocery store passed a background check and purchased the weapon used in the slaughter, a Colorado gun shop owner said Friday.

"We are absolutely shocked by what happened and our hearts are broken for the victims and families that are left behind," John Mark Eagleton, the owner of Eagles Nest Armory in Arvada, said in a statement.

The store "will continue to fully cooperate" with investigators, Eagleton said.

"Ensuring every sale that occurs at our shop is lawful, has always been and will always remain the highest priority for our business," the statement said.

"Regarding the firearm in question, a background check of the purchaser was conducted as required by Colorado law and approval for the sale was provided by the Colorado Bureau of Investigation."

Nothing in the federal system would have prevented Alissa from passing a background check and buying a firearm, a law enforcement source had previously told CNN.

The suspect pleaded guilty to a misdemeanor count of third-degree assault in 2018 after attacking a high school classmate one year earlier, according to court documents and a police report. He was sentenced to one year probation, 48 hours of community service and anger response treatment, court documents said.

'Why that King Soopers? Why Boulder? Why Monday?'

"I think the victims' families and the community are desperate to know the motive," he told reporters. "We want to know the motive. And that's going to be the focus of our efforts going forward. Whether or not we're able to determine it remains to be seen."

Boulder Police Chief Maris Herold said, "Why that King Soopers? Why Boulder? Why Monday? Unfortunately, at this time, we still don't have those answers."

Additional charges of attempted murder in the first degree against Alissa will be filed in the "next couple of weeks," said Dougherty, adding that those counts stem from the suspect's exchange of gunfire with police.

The actions of law enforcement and the "quick thinking of a lot of people in the supermarket" undoubtedly saved lives, the prosecutor said. He said investigators were still examining store shelves and walls to determine the number of shots fired.

"It was a grocery store in the middle of the day," he said. "So from your own experience -- we've all been to the supermarket. That's how many people were there."

King Sooper's employee Emily Giffen told CNN's Erin Burnett on Friday that she witnessed the suspect chase a man into the parking lot and shoot him multiple times.

Giffen said she was on break outside the building with another girl when they heard a "loud popping sounds."

She said she turned to the other girl and said, "I don't think it is fireworks."

Giffen said she then saw a man "running into the middle of the street to get away."

The suspect shot him and then shot four or five more rounds into the man's back while he was on the ground, Giffen said.

The two women then ran behind the store where they found other employees and customers evacuating the building. The evacuees ran up a hill that was covered in snow and mud to get to the other side of the shopping center and take shelter in a Whole Foods store, Giffen said.

Alissa has been moved out of county jail after officers became aware of "threats toward him" from other inmates, a jail official told CNN.

He was relocated early Wednesday morning, according to Jeff Goetz, Division Chief of the Boulder County Jail.

Alissa was never in direct contact with the inmates and was not harmed, but other inmates were asking about him and making threats, according to Goetz. These questions were directed toward other officers.

The move preceded Alissa's initial court appearance Thursday, where he was charged with 10 counts of murder in the first degree. He remained seated in a wheelchair wearing a face mask and only spoke when the judge asked if he understood his rights.

Prosecutors said in court that more charges may be filed regarding Monday's massacre, when Alissa allegedly shot and killed customers and employees at the King Soopers grocery store.

Authorities have yet to share information on a possible motive. His brother, Ali Aliwi Alissa, told CNN earlier this week that he may have mental illnesses, and that he was bullied in high school over his name and for being Muslim. Alissa had become increasingly "paranoid" around 2014, believing he was being followed and chased, according to his brother.

During Thursday's proceeding, Alissa's lawyer, Kathryn Herold, noted that a full assessment of his "mental illness" was needed.

"We cannot begin to assess the nature and depth of Mr. Alissa's mental illness until we have the discovery from the government," she added.

The presiding judge, Thomas F. Mulvahill, agreed to set the next hearing in "about 60 to 90 days."

"I want to make sure that the defense has ample opportunity to prepare to move forward," Mulvahill added.

Dougherty said the date of his next hearing will be announced next week.

Vigils are held as friends honor those who were lost

As the court proceedings move forward, residents in the community continue to show support for the friends and families of those killed in the shooting.

The Boulder Police Department said Friday in a tweet that Talley "led a contact team of officers into the store within 30 seconds of arriving on scene."

On Thursday, a vigil was held at Boulder's Fairview High School. Jana Bledsoe, a local elementary school teacher, attended the gathering and spoke with CNN about how she knew Officer Talley.

"He was just such a remarkable human being. Most of the incidents were very, very minor, having to do with mental health, homeless people that happen to end on our campus," she said. "He managed them so beautifully, emotionally, compassionately."

Bledsoe shared an incident that Talley had handled, when a homeless man was on school grounds.

"(Talley) went over, and he sat down with him and just said, 'Hey, buddy. What are you doing?'" she said, as Talley "put his arm around him and said, 'I understand,' as the man washed his clothes.

"He was just at our school on Saturday. He was just the kind of person that I wish we could populate the entire planet with."

Betsy Prowell attended the vigil with her family, who spoke about growing up down the street from the supermarket.

"We're here today to support our community, and Boulder, we're trying to stay strong. We live right down the street, about five blocks down...we know everyone, a lot or most everyone that works there. This is our neighborhood," Prowell said.

Kevin Mahoney, one of the 10 killed in the shooting, was remembered as a loving father and husband who volunteered, loved hiking and helped clean up trails, his family told CNN's Anderson Cooper on Thursday.

Ellen Mahoney, Kevin's wife of 35 years, and their daughter Erika expressed their deep appreciation for the outpouring of support received by friends and others across the country.

"He was just so kind to everyone, and I think one thing we want people to know is, he's a real person, and his loss has a ripple effect to so many people and the Boulder community and beyond," Erika said, noting that she is expecting and that Kevin was elated for her.

Ellen said that she is thankful for the past year spent with Kevin as they endured the Covid-19 pandemic.

"It gave us time to be together. It reminded me almost like the beginning of our marriage. We took a lot of walks, we cooked together, we watched TV together," she said. "I'm very grateful for this past year because we were both working together as a team under very difficult circumstances."

As the family grieved following the shooting, Ellen received a condolence letter that she wished to share on air.

She read, "'If you are in pain and suffering, remember who you truly are and breathe. You are as vast as the sky, as bright as the stars, as wide as the ocean, as strong as a mountain, and as beautiful as the first flower blooming in spring.'"

'If you needed anything she was there'

Suzanne Fountain, was an actress who had performed with the Denver Center for the Performing Arts. She worked for a nonprofit financial education program, signing seniors up for Medicare.

Her life partner Philippe Bernier told CNN's Don Lemon they first met at a theater where they worked on the Tennessee Williams' play "The Glass Menagerie." They were around 30 years old and dated a handful of months before going their separate ways.

Then, 26 years later when Bernier was doing another show at a different theater Fountain saw his name in the paper and came to see him. They had been together ever since, Bernier said.

"She had a way of loving that was just not like other people. I don't know everybody. But when she loved you, it was deep. And if you needed anything at any time, she was there. She was there, no questions asked. And I don't know too many people like that," Bernier said.

Fountain got things done. "She was a bit of a bulldog. So, she was beautiful at it, but she would ask nicely. If she didn't get the answer she wanted or needed, she would ask for the supervisor. She would not let it go," Bernier said.

He says he doesn't really hate the shooter, but it might take him a little while to forgive him.

"I don't really hate the man who shot her. I don't like him much. But I sort of blame society. This been going on for a long time," he said.

He added that people get shot on TV all the time and kids are watching all that. "What do you expect them to be when they grow up?"