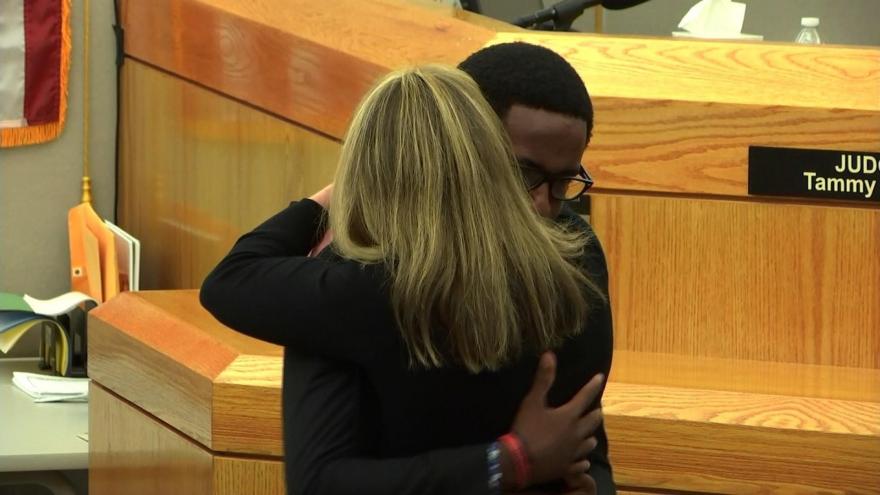 The brother of Botham Jean, who redirected the national conversation on police violence when he embraced the ex-Dallas police officer who killed his brother, accepted an ethical courage award from a law enforcement organization on December 3, 2019 -- but not without reservations.

(CNN) -- Brandt Jean, who redirected the national conversation on police violence when he embraced the ex-Dallas police officer who killed his brother, Botham Jean, accepted an ethical courage award from a law enforcement organization Tuesday -- but not without reservations.

The Institute for Law Enforcement Administration honored Jean at a ceremony in Plano, Texas.

Before handing the 18-year-old its 2019 Award for Ethical Courage, the organization played video of the young man's October remarks in the courtroom following the trial of Amber Guyger, who had just received a 10-year sentence for killing Botham Jean.

Guyger had contended the shooting was a mistake -- she was in the wrong apartment, which she had mistaken for her own, and believed Botham Jean was an intruder -- but a jury found her guilty of murder.

From the witness stand, Brandt Jean told Guyger he loved her and that he didn't want her to go to jail. He bore no ill wishes toward her, he said.

"If you truly are sorry -- I know I can speak for myself -- I forgive you," he told the former policewoman. "And I know if you go to God and ask Him, He will forgive you."

With the judge's permission, Brandt Jean walked across the courtroom and embraced Guyger. While some, including the judge, saw it as a moment of great human magnanimity, others questioned the societal forces at play that would drive a young black man to hug a white officer who killed his brother in his own home.

'I struggled with it'

The teen seemed aware of the debate as he took the podium Tuesday in a black suit and a shirt of bright red, his brother's favorite color.

"I never intended for the statement I made to the person that murdered my brother to receive such international recognition," Jean said. "To be honest, I struggled with it for a long time, as I struggled with accepting this award from this agency."

Sister sees both sides of argument

He ultimately decided to accept the award, he said, so he could deliver a message to those in attendance. He appreciated the opportunity to console Guyger because she needed forgiveness and he needed to be "free of the burden of unforgiveness," he said.

That forgiveness, however, does not release law enforcement from its own burden to "amplify the value of all lives," he said.

"My brother was well aware of the danger posed to young black men due to the misconceptions about color that seem particularly pronounced among the law enforcement community," Jean said. "I want you all to know I am not a threat, that young black males are not inherently dangerous or criminal."

He further implored those in attendance to keep Botham Jean in their thoughts as they went about their duties.

"I insist that you encourage diverse leadership that can model inclusion and restraint," he said. "Most importantly, I ask that you remember my brother -- my example of ethical leadership, a young black male that was perceived as a threat by one of your own.

"I want you to remember him. I want you to ask yourself what are you doing to ensure that there will be no other families like mine, no other little brothers that have to model ethical leadership in forgiveness of a cop whose lack of training and discipline caused them to carelessly take a life of another."

He closed to a standing ovation, saying, "I'm truly grateful for this award, and I hope others can see the light in what I did."

'I see the strength given to you by your faith'

Gregory Smith, director of the Institute for Law Enforcement Administration, applauded the teen, his family and everyone who helped mold Brandt Jean into the young man that he has become.

Op-ed: Hug is not absolution for racism

"You are truly a model of good parenting," he said. "I see the values instilled in you by your parents. I see the strength given to you by your faith. If the rest of us can tap into just a slice of the moral courage and the principles that you displayed in that moment, this world would be a better place."

Brandt and Botham Jean were raised in the Church of Christ in St. Lucia, and their mother, Allison, gave them biblical middle names -- Botham Shem and Brandt Samuel.

Brandt Jean traveled with Allison and his father, Bertrum, from St. Lucia for Tuesday's ceremony. His older sister, who traveled from New York, was also in attendance.

In January, the teen is slated to begin his studies at Harding University in Searcy, Arkansas, the same school from which his brother graduated in 2016 before moving to Dallas.