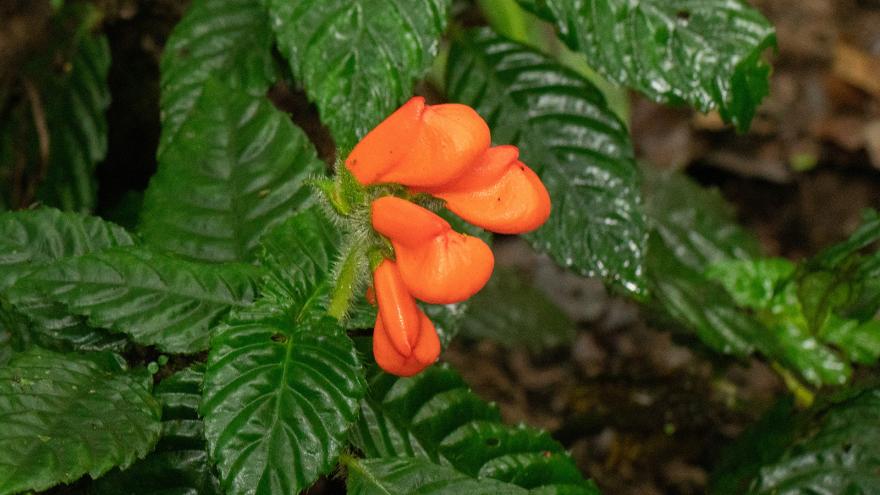 (CNN) -- A rare blazing orange wildflower that was thought to be extinct for 36 years was rediscovered in South America.

The wildflower Gasteranthus extinctus has only been spotted in Ecuador's cloud forest and was last documented in 1985, according to a new study in the journal PhytoKeys. The researchers saw a dim future for the flower, so they named it "extinctus" because they believed it would soon die out, said coauthor Dawson White, a postdoctoral research fellow at the Field Museum in Chicago.

Most of the cloud forest suffered deforestation in the years that followed. The habitat loss was thought to have killed off dozens of species, White said.

Researchers decided to take another look in western Ecuador in 2021 to see if there were any patches of forest left and to search for the species that had lived there. Within days, the flower was found, White said.

"It was total elation because Gasteranthus extinctus is a symbol of these unique forests," White said.

The team gathered samples to later confirm the DNA of the plant, which was scattered in clumps in the small sections of remaining forest.

After the magnificent rediscovery, team member Riley Fortier checked the nature app iNaturalist to see if anyone else had taken a similar photo, White said. A joint initiative of the California Academy of Sciences and the National Geographic Society, iNaturalist is a biodiversity observation network where people can post photos of plants, birds and other findings in nature for help with identification.

The researchers found photos of the wildflower posted in 2019 by a group of Ecuadorian students who had been enjoying an outing in a small conservation area.

"They were out on a trip a little north of where we were collecting and sure enough, they took two pictures of Gasteranthus extinctus, but they weren't able to identify it as such," White said.

He was able to track down the students to learn more details about their encounter and to include their observations in the scientific paper.

Gasteranthus extinctus is not well known in Ecuador, but another member of its family, the African violet, is, said Carmen Ulloa Ulloa, botanist and curator at the Missouri Botanical Garden in St. Louis. She was not involved in the study.

"Many people probably have an African violet from Africa in their homes, but very few of the Ecuadorian native plants are cultivated for ornamentals," she said.

Working against the clock

While no longer considered extinct, the wildflower is still endangered, White said.

Despite the devastation the cloud forest is suffering, the Ecuadorian government continues to destroy the forest for their own gain, which wreaked havoc in that part of the country, he explained.

The originally Ecuadorian government redistributed the land to the working class in the 1950s and 1960s, White said.

People cut down trees to make way for growing crops like cacao beans and bananas, most of which end up in the United States, he added.

"We were with local landowners, and they told us about their plans to continue to cut down some of these small forests that still remain," White said.

Ulloa Ulloa grew up in Ecuador and saw firsthand the deforestation, but as she became an adult, she understood the delicate balance of needing to protect the environment while finding ways to make money.

"You need to protect the forest, but then you also need to feed the population of the country," Ulloa Ulloa said.

One solution is to invest in ecotourism, which invites tourists to enjoy the natural land, she said. It's a way to protect the forest while boosting Ecuador's economy, Ulloa Ulloa explained.

Research teams who traveled to Ecuador before and after White's team discovered nearly half a dozen plant species new to science. The teams who discovered the new species are hoping to publish their findings later this year, he said.

White's goals are to conserve the environment of the cloud forest while continuing inventory on the newly discovered species, he said.