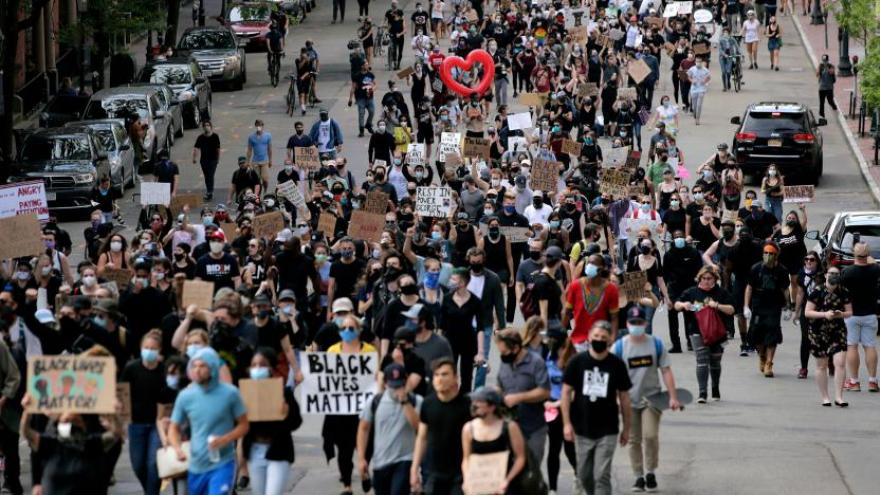 Demonstrators protest against police brutality in Boston on June 3.

(CNN) -- A Boston police sergeant has been placed on administrative leave and the department's Bureau of Professional Standards has been ordered to investigate after a series of body camera videos taken during racial justice protests over the summer were released in a report Friday.

The Appeal, which first published the videos, reports police officers are seen "bragging about attacking protesters, targeting nonviolent demonstrators for violence and possible arrest, discussing arrest quotas and the use of cars as weapons, and multiple instances of excessive force and liberal use of pepper spray."

"As soon as these videos were brought to my attention, I immediately ordered my Bureau of Professional Standards to open and conduct a thorough and fair investigation into this matter, and the totality of circumstances involved," Police Commissioner William Gross said in a statement Friday night.

"I have placed a Sergeant involved in this incident on administrative leave and I will take any additional action as necessary at the conclusion of the investigation," Gross said. "I want to encourage people to bring these matters to our attention so that we can investigate them appropriately."

The videos were released to attorney Carl Williams by the Suffolk County District Attorney's office as part of discovery in a case he is working pro bono through the National Lawyers Guild, Williams told CNN in a phone interview Saturday morning.

Williams told CNN he took on about eight cases of protesters who were arrested during a demonstration that occurred from May 31 to June 1 in Boston.

The video clip Williams sent to CNN is part of 70 hours of video released to him.

Williams said the narrative the police have given of that night, which includes that protesters "went wild and looted stores in Boston," doesn't give the full scope of what happened.

At the time, the Boston Police Department announced the arrest of 53 individuals during protests that began on May 31 and spilled into the early morning hours of June 1. It is not clear if they received any calls related to behavior by their officers at the time.

"Protesters, activists, organizers, Black Lives Matters folks were like, 'The police attacked us, and they used weapons, and they used advanced weapons and chemical weapons,'" Williams said.

One body camera clip provided to CNN by Williams shows a sergeant "bragging" about his actions during the protest, including hitting people with his vehicle, Williams said.

The unidentified sergeant in the video, which is less than a minute long, is heard laughing and explaining to another officer how he hit protesters with a vehicle.

He describes using an unmarked state police cruiser to hit protesters who were nearby.

"I'm f**king hitting people with the car," he says.

It is not clear if the sergeant seen in the video provided to CNN is the same sergeant the police commissioner placed on administrative leave.

"(The) criminal defense attorney in me says that is many counts of minimum assault battery with a dangerous weapon, at the minimum," Williams said.

The Suffolk County District Attorney's office said it is looking into the videos.

"Several of the videos present troubling scenes that merit further examination, which is what the office is doing," Renee Algarin, a spokeswoman for the office, said in an email to CNN. "DA (Rachael) Rollins takes this very seriously."

CNN has reached out to Boston Police Department and the local police union for additional comment and information.

Boston Mayor Marty Walsh released a statement Friday night saying the clips -- which he describes as "difficult to watch" -- raise questions that he expects the department's Internal Affairs investigation to answer.

"We never want to see police officers using more force than necessary, even when tensions are high," Walsh said. "These types of situations are also exactly why we are implementing body worn cameras for all police officers, and why we convened a police reform task force committed to bringing necessary reforms and accountability to the police department," the statement said.

There were more than a few instances of police wrongdoings in the videos, Williams said.

"Police vindictively used weapons to attack people. And you can see that many, many, many times, and they were bragging about it, and it is part of their culture," Williams said.

"People who are supervisors, not line-level people, people who have gold badges and people who have sergeant stripes are bragging, are stealing things, are assaulting people with weapons in vindictive ways, not serve and protect ways. And that's terrifying."