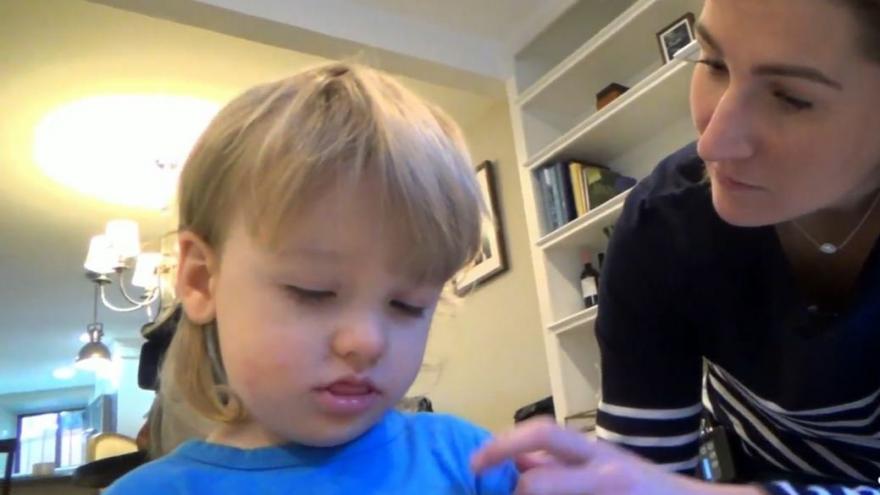 BOSTON (WBZ) -- Henry Saladino has a knack for music, throwing back his long blonde hair and smiling as he beats on a toy electric drum. The two-year old’s mom, Mary, sings songs to him, praising his perseverance with a lot of positive reinforcement because she knows that each note of her loveable toddler’s life is also punctuated by fear.

Henry has a rare disease called Alternating Hemiplegia of Childhood or AHC with a genetic mutation shared by roughly 25 diagnosed patients in the entire world.

The disease causes Henry to switch from happy boy to helpless in an instant with symptoms such as full body paralysis and seizures.

“It can present itself as full body paralysis that can last anywhere from minutes to days,” said Dr. Chrystelle Achkar, Henry’s neurologist at Boston Children’s Hospital. “They also have very difficult to control epilepsy. Sometimes go into prolonged seizures.”

Those episodes are heart wrenching for Mary to watch. She worries each time about Henry’s brain.

“You would think it would get easier, but it doesn’t. I think every time he has a symptom, I try to shove the emotion down, but the emotion is, oh my God, I don’t want to lose my baby,” Mary said.

There is a glimmer of hope for Henry. It is a treatment called an Antisense Oligonucleotide or ASO. For Henry, there’s a mutation in the mRNA in his DNA that causes his cells to produce deficient or disease causing protein. The hypothesis is that the ASO could patch the mutation, like a piece of Velcro or a Band-Aid, preventing the protein from being made.

But as Henry endures his disease in Boston’s South End, across the river from Cambridge, the life sciences capital of the United States, it is unlikely that any pharmaceutical company there will run a costly and risky trial for just one patient.

“My understanding is that it isn’t worth the risk for them and there’s no financial pay off,” said Mary.

Dr. Achkar, who specializes in rare diseases, knows it’s difficult for researchers to choose which diseases they should tackle.

The Saladino family decided to take matters into their own hands and create the ASO on their own. While Mary gives meds to Henry, she calls scientists, identifies labs, and fundraises. Just developing the ASO could take 18 months and cost a million dollars.

“You have to go through the FDA, you need to go through manufacturing, and toxicology even before that. So, we are really trying to serve as a non-profit who develops a treatment for their son but in essence, we are trying to do what a biotech company does,” said Mary.

Mary says her mission is driven by love and fear.

There is also a mother’s adoration for her son and their love music.

“I have to believe, I know Henry because his life depends on that right now and me catching his symptoms and stopping them quickly. I just believe we can do this,” Mary said.