Border Patrol agents were captured on video in an altercation with migrants in California. The FBI is now investigating 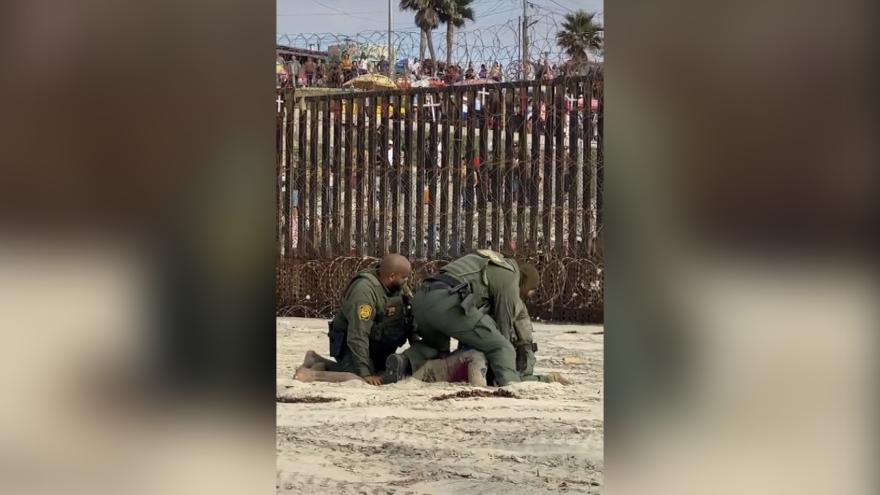 (CNN) -- An altercation involving United States Border Patrol agents and two migrants on a Southern California beach was captured on video Sunday, prompting the FBI to investigate an alleged assault on federal officers.

The incident comes amid a rise in migrant apprehensions in the San Diego region, where the confrontation took place.

In a video originally posted on TikTok, one agent is seen kneeling next to a man who is face down on the beach with his hands behind his back while another agent is seen waving what appears to be a baton toward a man standing in a wetsuit, who at times, appears to move toward the agent.

Additional agents enter the scene, and one of them tackles the man to the ground. Three agents are then seen in a scuffle on the ground with the man as they restrain him.

Video of the confrontation was also posted to Twitter by newly elected Texas Republican Rep. Mayra Flores, garnering 1.2 million views as of Wednesday.

The incident happened around 5:10 pm Sunday near Imperial Beach, according to US Customs and Border Protection. Border Patrol agents had responded to the area to apprehend two migrants who entered the US illegally by swimming around the International Boundary Maritime primary fencing, according to CBP spokesperson Gerrelaine Alcordo.

"As agents attempted to take both migrants into custody, the migrants actively resisted and assaulted the agents. During the confrontation, the agents deployed less-lethal devices," Alcordo added.

Two Mexican nationals, ages 17 and 20, were taken into custody and transported to a nearby station for processing, CBP said.

"The FBI is aware of the situation involving two U.S. Border Patrol agents that occurred on Sunday, August 21, near Imperial Beach, California, and is investigating the assault on federal officers," an FBI spokesperson told CNN.

The FBI will review the incident and determine what federal response is warranted, the spokesperson added.

The Washington Examiner first reported the FBI investigation into the altercation.

In the San Diego region, there has been a 25% increase in encounters with migrants since last fiscal year, according to CBP data.