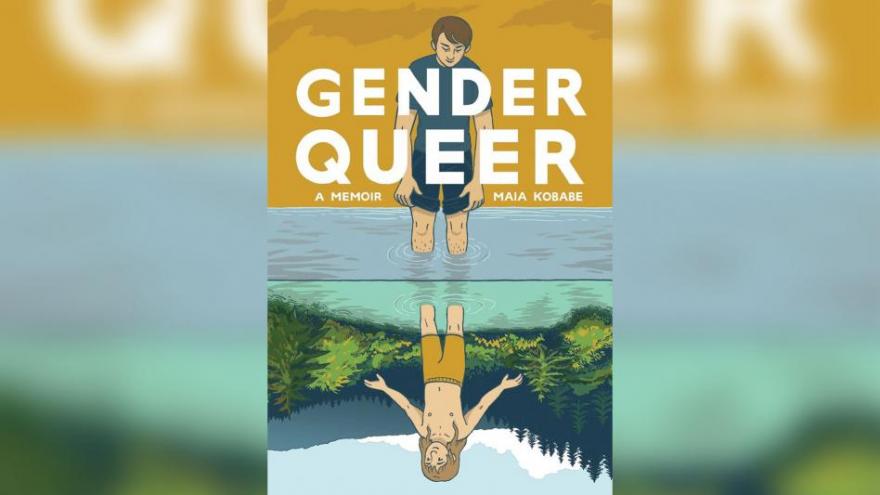 The most-challenged book of 2021 was "Gender Queer" by Maia Kobabe.

(CNN) -- Books that tell the stories of Black and LGBTQ people or by authors in those communities were among the 10 most challenged titles in 2021, the American Library Association said.

As the efforts to ban books in schools escalated across the United States last year, the ALA's Office for Intellectual Freedom tracked which books were targeted in libraries, schools and universities. On Monday, the ALA released its list of the most challenged titles.

The majority of books were called inappropriate because some people considered them to be sexually explicit, have sexually explicit images or include sexual references. Some books dealt with the LGBTQ experience, and one was challenged for allegedly promoting "an anti-police message," the ALA said.

4. "Out of Darkness," by Ashley Hope Perez

6. "The Absolutely True Diary of a Part-Time Indian," by Sherman Alexie

7. "Me and Earl and the Dying Girl," by Jesse Andrews

8. "The Bluest Eye," by Toni Morrison

10. "Beyond Magenta," by Susan Kuklin

The organization has been collecting data about banned books since 1990, but it has published the list since at least 2001. The lists are based on media stories and reports sent to the ALA by libraries and schools.

ALA President Patricia Wong said last year the organization tracked the highest number of attempted book bans since her organization began compiling its list of the most challenged books.

Last year, there were 729 challenges to library, school and university materials and services. That's up from 156 and 377 challenges reported to the ALA in 2020 and 2019, respectively.

But a challenge doesn't mean a book is removed from library shelves or classrooms. It's an "attempt to remove or restrict materials, based upon the objections of a person or group" and many times those efforts are unsuccessful, the ALA said.

While the ALA supports parents' decisions over their child's reading and believes they should not have those choices dictated by others, Wong said students' access to books should not be restricted.

"Young people need to have access to a variety of books from which they can learn about different perspectives. So, despite this organized effort to ban books, libraries remain ready to do what we always have: make knowledge and ideas available so people are free to choose what to read," Wong said in a statement.

Parents went from taking issue with books that mostly dealt with racism and racial justice in 2020 to a greater focus on books that discuss gender identity and sexual orientation.

State lawmakers proposed dozens of bills that restrict classroom readings across the country. Texas Gov. Greg Abbott called on his state's school boards to remove books he described as "pornography." All while more school districts continue pulling books reported as "inappropriate" from their library shelves.

The most-challenged book of 2021 was "Gender Queer" by Maia Kobabe, which discusses the non-binary author's journey with her own identity. Kobabe's book has been banned or challenged from school libraries in at least a dozen states.

"Read the whole thing and judge for yourself, don't just go based on the one or two tiny clips you've seen on social media," Kobabe said.

Three other books included in the 2021 list -- "All Boys Aren't Blue," "Lawn Boy," and "The Bluest Eye" -- were the subject of a lawsuit filed earlier this year by two students in Missouri.

The students sued their school district in February over the decision to remove a total of eight books from school libraries. The district argued the novels were banned because they discuss issues surrounding race, gender and sexual identity, according to the lawsuit.

For George M. Johnson, the author of "All Boys Aren't Blue," the numerous challenges to their book and its inclusion on the ALA's list signal how important their work for students and teens.

"What is at stake when we ban these books are actual lives who need to read their story and about characters like them so they too know they can exist and thrive in this world," they added.

The list, Johnson said, is empowering them to write even more stories.