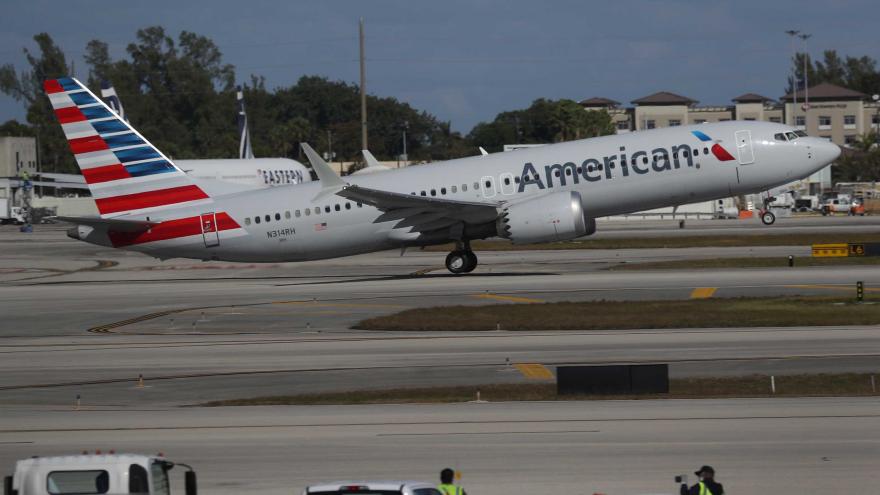 (CNN) -- Boeing 737 Max has returned to passenger service in the US this morning for the first time since two fatal crashes grounded the jet in March 2019.

American Flight 718 departed the Miami International Airport at approximately 10:40 ET this morning. American Airlines is initially using the airliner on a single route between Miami and New York's LaGuardia airport.

American expects to expand the use of the Max in 2021, and Southwest and United announced plans to add the plane to flight schedules in the coming months.

Prior to the departure, American officials said the airline will soon have 34 Max jets ready for service and have now trained 1,400 pilots to fly the plane.

"The aircraft is ready to go," airline president Robert Isom told reporters. He said the Max has better passenger amenities than previous 737s and "is much more efficient. It's much more green. It's a new plane that ought to be flying, and other aircraft ought to be left at home right now."

In early December, CNN reporters flew on an invite-only Boeing 737 Max sample flight for press and airline employees. American Airlines Chief Operating Officer David Seymour told CNN after that flight that the time is right for the plane to return to service.

"It's not rushed. Everything we do at American is all surrounded by safety," Seymour said. "We're not going to do anything that's unsafe. All of our actions, all of our decisions, are based on that."

Victims of the two crashes are urging air passengers to avoid the Max because they fear it remains unsafe. Zipporah Kuria, who lost her father on Ethiopian Airlines Flight 302, grimly said Tuesday that a Max flight is "a one-way ticket."

Tuesday's flight is scheduled to land at New York's LaGuardia shortly after 1 pm ET. It is then scheduled to begin the return trip to Miami at 2:30 pm ET.