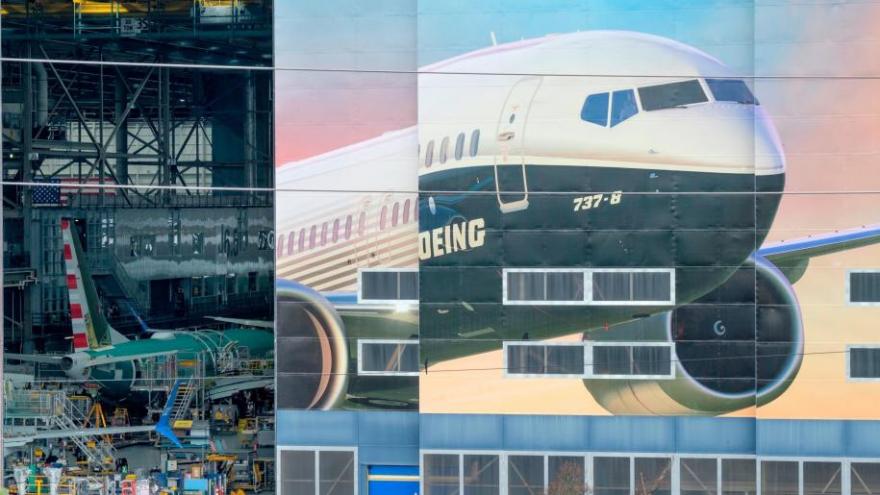 The Boeing 737-8 is pictured on a mural on the side of the Boeing Renton Factory on March 11, 2019 in Renton, Washington. Two of the aerospace company's newest model airliners have crashed in less than six months.

(CNN) -- Boeing's 737 Max jets will remain grounded for weeks after the Federal Aviation Administration said Monday afternoon that the plane maker continues to work on a software fix.

Boeing had said it would submit the fix to the FAA last week, and it had gathered hundreds of industry representatives at its Seattle-area facilities last Wednesday to demonstrate the software changes.

But the FAA said Monday that the company concluded "additional work" is needed.

"The FAA expects to receive Boeing's final package of its software enhancement over the coming weeks for FAA approval," the agency said in a statement. "Time is needed for additional work by Boeing as the result of an ongoing review of the 737 Max Flight Control System to ensure that Boeing has identified and appropriately addressed all pertinent issues."

Boeing acknowledged the new timeline, saying in a statement that the software change would be "completed in the coming weeks." It did not say why the timeline had changed.

"Safety is our first priority, and we will take a thorough and methodical approach to the development and testing of the update to ensure we take the time to get it right," the company said.

An aviation source told CNN that Boeing had discovered "an additional piece to address" in the final review of the new software and that integrating new flight control software on a complex aircraft takes time. Prior to the discovery, Boeing had expected the new software to be ready within days.

American Airlines said Monday afternoon that it was aware the Max "may be further delayed" in returning to service. It has been forced to cancel dozens of flights daily while the planes await a fix.

Capt. Dennis Tajer of the Allied Pilots Association, which represents American Airlines pilots, said the group was encouraged by Boeing's recent "sense of energy" to produce a fix but also realized the timeline was ambitious.

"We were disregarding that because having the pilots fully engaged, as they are, and all the information, and knowing what the training will be all put this out as more of a distant timeline for getting the aircraft flying," Tajer told CNN.

The FAA followed other countries' aviation authorities in grounding the Max on March 13 following the second crash in less than five months. The agency said it had reviewed satellite data and physical evidence that showed similarities between the Lion Air flight that crashed in October and the Ethiopian Airlines flight that crashed days earlier in March.

A preliminary report on the Ethiopian accident is expected in the coming days.

Software designers, Boeing engineers and test pilots had worked out a set of changes to a stabilization system known as MCAS that has been under scrutiny from investigators piecing together the Lion Air crash, according to a company official. The fix brings in multiple layers of protection and is accompanied by a training regimen.

The FAA statement said the software changes would require a "rigorous safety review."

"The FAA will not approve the software for installation until the FAA is satisfied with the submission," the agency said.