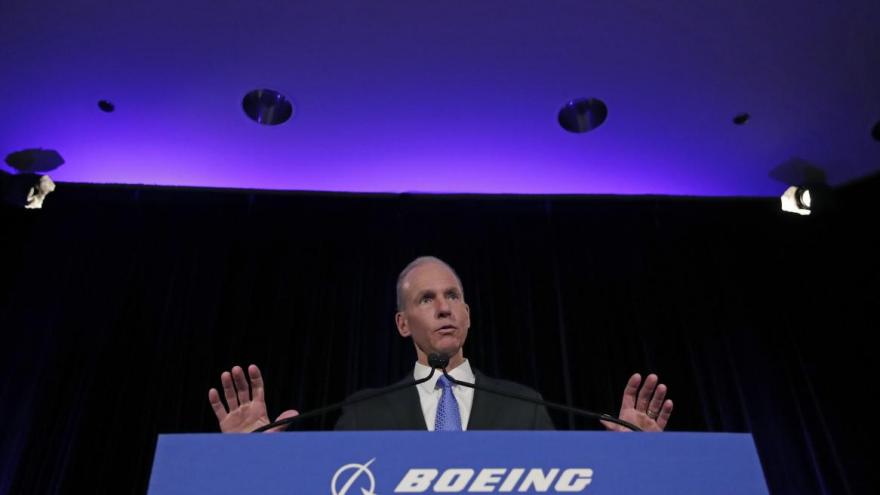 The device linked to the Boeing 737 Max software that has been scrutinized after two deadly crashes was previously flagged in more than 200 incident reports submitted to the Federal Aviation Administration, but Boeing did not flight test a scenario in which it malfunctioned, CNN has learned.

(CNN) -- The device linked to the Boeing 737 Max software that has been scrutinized after two deadly crashes was previously flagged in more than 200 incident reports submitted to the Federal Aviation Administration, but Boeing did not flight test a scenario in which it malfunctioned, CNN has learned.

The angle-of-attack (AOA) sensor, as it's known, sends data to a 737 Max software system that pushes the nose of the aircraft down if it senses an imminent stall. That software, triggered by erroneous data from AOA sensors, is believed to have played a role in crashes of Lion Air and Ethiopian Airlines jets.

RELATED: Boeing says 'standard' alert system was not operable on all Max 737 airplanes

Former Boeing engineers and aviation analysts interviewed by CNN have criticized Boeing's original software design for relying on data from a single AOA sensor, claiming that those devices are vulnerable to defects.

The FAA has received at least 216 reports of AOA sensors failing or having to be repaired, replaced or adjusted since 2004, according to data from the FAA's Service Difficulty Reporting website.

Those reports, about one-fifth of which involve Boeing planes, include incidents in which AOA sensors were frozen, improperly installed, struck by lightning or even hit by flying birds. In some cases, faulty sensors led to stall warnings, forcing pilots to abort takeoffs or perform emergency landings.

In one 2011 case, the flight crew on a Boeing 737-800 reported that the "angle of attack and airspeed failed" and declared an emergency. An AOA sensor was then replaced. The FAA also issued two directives for various Boeing aircraft models before the 737 MAX was released, indicating that Boeing was aware of the potential for the sensors to cause problems in its planes.

A 2013 directive mandated inspections of certain AOA sensors to prevent possible problems that included "obstacles after takeoff, or reduced controllability of the airplane."

Another FAA directive published in 2016 warned that AOA sensors on Boeing MD-90-30 airplanes needed to be modified and tested to address "the unsafe condition on these products."

While those directives did not involve the 737 Max, Peter Goelz, a former managing director of the National Transportation Safety Board (NTSB) and a CNN aviation analyst, said AOA sensors fundamentally work the same on different aircraft models.

"This is a fairly simple external device that can get damaged on a regular basis," Goelz said. "That's important because Boeing made the decision to rely on them as single sources for streams of data."

In a statement to CNN, a Boeing spokesperson said the 737 Max and its stall-prevention system, called MCAS, were certified in accordance with all FAA requirements, and that Boeing's analysis for the plane determined that in the event of erroneous inputs from an AOA sensor, pilots would be able to maintain control of the plane by following established procedures.

"Single sources of data are considered acceptable in such cases by our industry," the Boeing spokesperson said.

A preliminary report by Ethiopian government officials suggests that a malfunctioning AOA sensor on Ethiopian Airlines flight 302 in March fed erroneous data to the MCAS, which repeatedly forced the nose of the plane down as pilots struggled in vain to regain control.

That sequence of events is almost identical to problems on board the doomed Lion Air Flight 610 that crashed in October. In total, 346 people died in the two accidents.

Since the initial crash last October, Boeing has been updating the MCAS software on the 737 Max to use data from the plane's two AOA sensors, rather than relying on one sensor. Critics question why the airplane's system wasn't originally designed that way.

"From the beginning it should have been a fail-safe design, which would have relied on two inputs to make sure that you weren't sensitive to one failure," said Peter Lemme, a former Boeing flight-controls engineer who helped design systems for the 757 and 767.

Lemme, who was subpoenaed by a grand jury in an investigation into the 737 Max, said he doesn't understand why it took two fatal crashes for Boeing to make those changes.

Didn't test how software would respond to sensor malfunction

In addition to not including inputs from two AOA sensors in its original design, Boeing did not flight test AOA sensor malfunctions and how MCAS software would respond, according to several sources.

A former Boeing pilot who tested the 737 Max, who requested anonymity due to fears of negative repercussions, told CNN "I don't think we appreciated the ramifications of a... failure of an AOA probe."

Another source familiar with the 737 MAX testing said the failure of an AOA sensor was not flight tested, but rather "analyzed in the design and certification" of the aircraft, and it was determined trained pilots would have been able to handle the failure.

A second former Boeing test pilot was surprised to learn that the company had relied on a single sensor, as opposed to a redundant system, to perform such a vital function in the first place.

"I would be very curious to know what their logic was on that...and what drove them to think that was a suitable solution," said the pilot, who also spoke on the condition of anonymity.

House Transportation and Infrastructure Committee Chairman Peter DeFazio told CNN his committee is investigating Boeing's design and the FAA's certification of the 737 Max and its MCAS system that relied on one AOA sensor.

"I have questions about whether all of the systems on the 737 MAX were tested and properly certified by the FAA, and this is one of the areas our investigation is exploring," said DeFazio, an Oregon Democrat.

Following the Ethiopian Airlines crash, the family of an American woman who died, filed a wrongful death lawsuit against Boeing, Ethiopian Airlines and Rosemount Aerospace, Inc., which allegedly made a faulty AOA sensor believed to have played a role in the crash, according the lawsuit.

The lawsuit accuses Boeing of putting "profits over safety," and rushing the 737 Max 8 to market to compete with rival Airbus and that company's A320 aircraft.

A spokeswoman for United Technologies, which owns Rosemount, did not respond to a request for comment. Although Boeing has updated the 737 Max's software to include input from two AOA sensors, Boeing's CEO Dennis Muilenburg said Monday those updates are not an admission of an initial design flaw. He said both accidents occurred due to a chain of events and that the erroneous triggering of the MCAS software was one link in that chain.

"We haven't seen a technical slip or gaffe in terms of the fundamental design and certification," Muilenburg said.