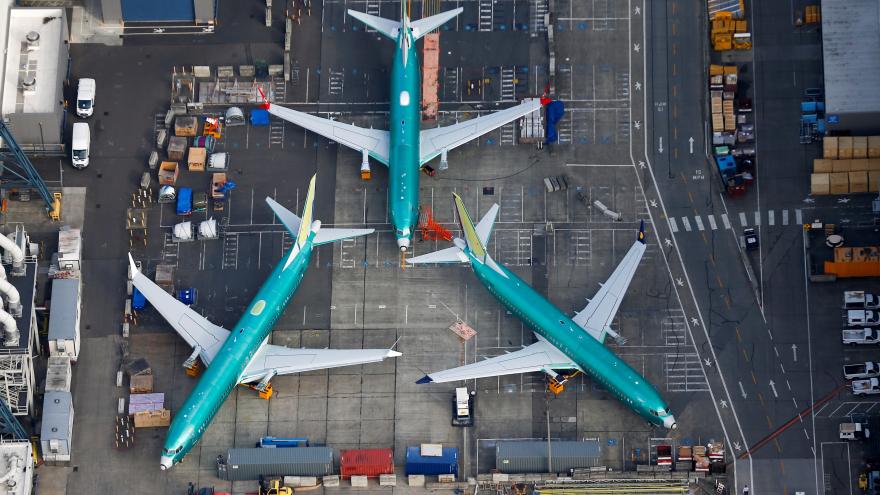 (CNN) -- A new statement from Boeing indicates that the aerospace manufacturer knew about a problem with the 737 Max aircraft well before the deadly October 2018 Lion Air crash, but decided not to immediately do anything about it.

Boeing previously acknowledged that an alert system that was supposed to be a standard feature in the fleet "was not operable on all airplanes."

But a statement released Sunday describes a troubling timeline that shows how long some at the company were aware of the problem before finally deciding to act.

In its statement Sunday, Boeing maintained that the software issue "did not adversely impact airplane safety or operation."

It's not known if the lack of the alert function played a role in the crashes of Lion Air and Ethiopian Airlines planes, which killed 346 people.

But the disagree alert could have notified pilots that a sensor was malfunctioning. In both disasters, preliminary investigations suggest faulty data from a malfunctioning angle of attack (AOA) sensor triggered the aircraft's anti-stall software, known as MCAS, which pitched down the nose of the planes as pilots struggled for control.

Boeing says its senior leadership and the Federal Aviation Administration did not know about the issue until after the Lion Air crash.

Neither the FAA nor Boeing interfered with the fleet's operations until the Ethiopian Airlines crash in March 2019, when all 737 Max jets were grounded worldwide, creating financial and logistical problems for three major US airlines.

Why the alert function is important

The AOA disagree alert only worked on an aircraft if the airline had purchased an additional, optional feature, known as the AOA indicator, Boeing said.

The AOA indicator lets pilots know if one of the AOA sensors is not working, while the disagree alert shows if the sensors contradict each other.

Boeing contends the alert function was not necessary for the safe operation of the airplane. But former Boeing engineers and aviation analysts interviewed by CNN criticized Boeing's original software design for relying on data from a single AOA sensor, claiming that those devices are vulnerable to defects.

Boeing also did not flight test what would happen to the MCAS system if the single AOA sensor failed, CNN previously reported.

In 2017, after 737 MAX deliveries began, Boeing engineers "identified" that the 737 Max display system software did not correctly meet the AOA Disagree alert requirements, the statement reads.

Yet, after a review, Boeing's engineers decided not to immediately correct the problem, concluding that "the existing functionality was acceptable until the alert and the indicator could be delinked in the next planned display system software update."

Then, one week after the Lion Air crash on October 29, Boeing added a line in an FAA airworthiness directive that said the disagree light was optional. It's not clear if Boeing alerted its airline customers to the issue.

Boeing also convened a Safety Review Board to consider whether the absence of the AOA Disagree alert from certain 737 MAX flight displays presented a safety issue, the statement said.

When the SRB confirmed Boeing's conclusion, Boeing shared it -- along with supporting SRB analysis -- with the FAA, the statement said.

Boeing said it is issuing a display system software update "to implement the AOA Disagree alert as a standard, standalone feature before the MAX returns to service."

"When the MAX returns to service, all MAX production aircraft will have an activated and operable AOA Disagree alert and an optional angle of attack indicator," the company said. "All customers with previously delivered MAX airplanes will have the ability to activate the AOA Disagree alert."