Bodycam video shows Dayton, Ohio, police officers dragging a Black paraplegic man out of his car during a traffic stop 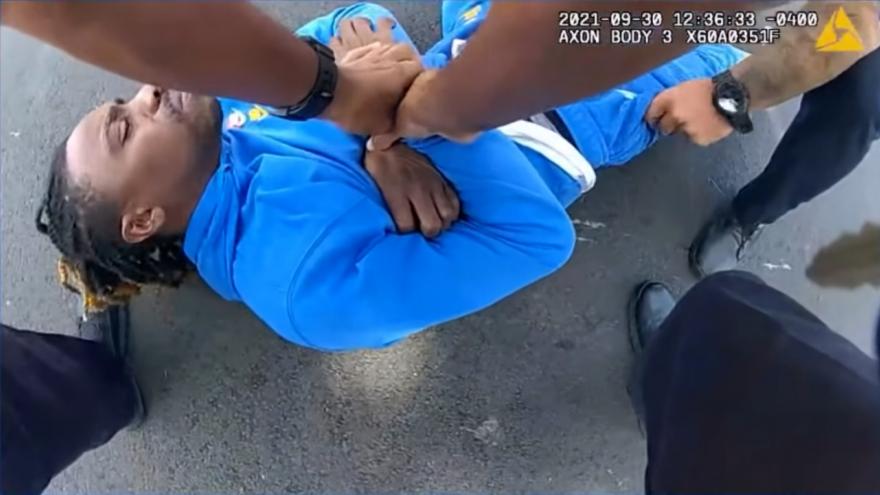 (CNN) -- A Black paraplegic man from Ohio has filed a complaint with the NAACP after video showed police officers pulling him out of his car by his hair and arms during a traffic stop late last month.

"They dragged me to their vehicle like a dog, like trash," Clifford Owensby, 39, recalled at a news conference Sunday.

Owensby accused the Dayton Police Department (DPD) of profiling, unlawful arrest, illegal search and seizure, and failure to read him his rights before being taken to jail, Dayton Unit NAACP President Derrick Forward said at the news conference.

On Friday, DPD released a nearly 12-minute video of the body camera footage taken from the September 30 incident.

Officers called for a Narcotics Detection K-9 unit because they observed Owensby leave a suspected drug house in the area that they had been monitoring, Dayton Police Major Brian Johns said in a recorded briefing. He added that based on his past felony drug and weapons history coupled with their observation that he had left the residence in question, the officers requested a narcotics Detection K-9 to conduct a free-air sniff on the vehicle.

"Dayton Police Department policy requires the occupants of the vehicle to exit for their own safety and safety of the K-9 officer to perform this free-air sniff," Johns said.

According to the video, shortly after the radio call, one of the officers returns to Owensby, who is in the driver's seat, and asks him to step out.

Owensby refuses, then tells the officer he can't because he is paralyzed. "I'm a paraplegic," Owensby says. "I got help getting in."

"So you can cooperate and get out of the car, or I will drag you out of the car. You see your two options here?" the officer yells at Owensby, who repeats his request for the officers to call a superior.

Seconds later, two officers grab Owensby, and a struggle ensues. One of the officers grabs him by the arm and collar and then grabs his hair and drags him out of the vehicle. Owensby is seen in the video struggling on the pavement, yelling for help as the two officers proceed to subdue him.

Johns said Owensby was taken to a local hospital where he was examined for possible injuries and released. The police major also said that officers retrieved a bag of cash from Owensby's vehicle containing $22,450.

Owensby said Sunday the money was his savings and that no weapons or drugs were found in the search. He was not charged with any drug-related offenses.

"I have nightmares," Owensby said about the arrest. "I should not have to leave out of my house every day wondering if this is going to happen to me again."

CNN has reached out to James Willis, the attorney representing Owensby in this matter, for comment.