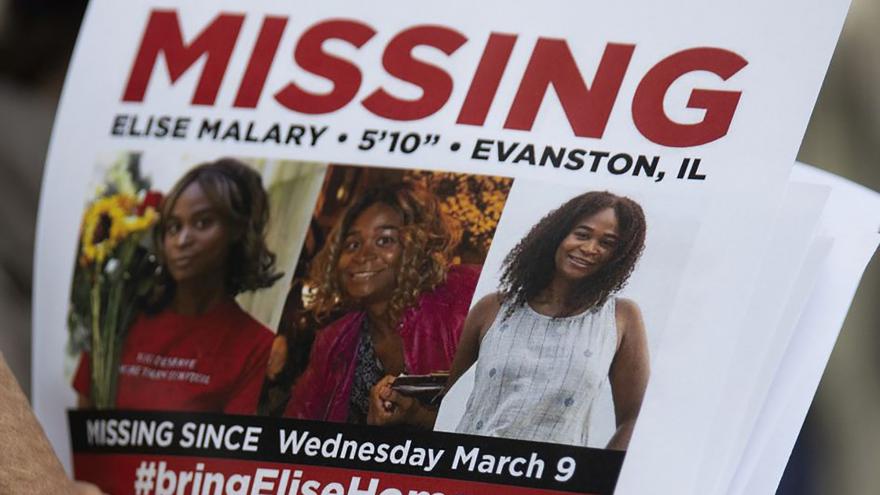 CNN) -- The body of a woman found in Lake Michigan on Thursday has been identified as missing transgender rights advocate Elise Malary, officials in Illinois say.

The fire department recovered a woman's body from the Lake Michigan shoreline and transported her to the Cook County Medical Examiner's Office, according to a statement from the Evanston Police and Fire Departments.

The body was "positively identified" as 31-year-old Malary on Saturday.

Malary was reported missing by a family member on March 11, according to police. She last had contact with her family two days prior.

The woman was last seen near her apartment in Evanston, and her car was found by police in a nearby parking lot Tuesday, CNN affiliate WLS reported.

While authorities discovered Malary's apartment had been left unlocked, police said they found nothing at her home or car to indicate foul play. No cause of death has been released yet.

Malary was a recognized LGBTQ+ rights activist around the Chicago area. She was a Community Outreach Specialist at the Chicago Therapy Collective, a group dedicated to supporting mental health in the transgender community, according to her LinkedIn.

Malary also spent time as a communications associate for Equality Illinois and interning for the AIDS Foundation of Chicago.

Chicago Therapy Collective said in a statement on Facebook the group is "heartbroken" over the loss of one of their board members.

"The outpouring of love, care, and community response reflects the deep impact of Elise's love and advocacy on so many of us," The statement said. "We hope that you are taking tender care of one another."

Malary's impact on the transgender community is being remembered by members of government as well.

"The loss of Elise Malary is heartbreaking. My heart goes out to all her loved ones, as well as all of Illinois' transgender community," Illinois Gov. J.B. Pritzker said in a statement on Twitter.

The governor pledged to continue to "make Illinois welcoming and inclusive for everyone."

"I'm heartbroken to share that Elise is no longer alive and with us," Hadden said. "Our community begin to process her loss and our grief. Elise Malary will be missed terribly."

Malary's cause and manner of death are pending, according to WLS. The Evanston Police Department's investigation is ongoing.