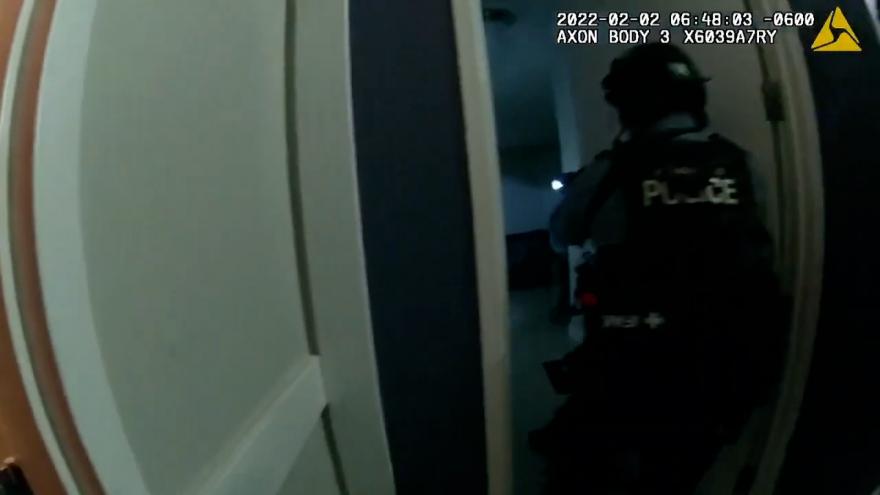 In the seconds that followed, a Black man named Amir Locke -- apparently asleep and shown to be holding a gun upon awakening -- was shot and killed.

The shooting by an officer on the SWAT team, in a city that came to represent ground zero for the police reform movement, raised questions from Locke's family and others about the city's warrant policy.

In total, the city released 14 seconds of real time video.

It's not clear what is contained in the warrant, and Minneapolis officials have said the totality of circumstances leading to their officer shooting Locke are now under investigation by the state's Bureau of Criminal Apprehension.

Police said Locke was not named in any search warrants. Attorneys for the man's family say he was in legal possession of his firearm.

The warrants are sealed to "protect the integrity of the investigation" and "until the court directs otherwise," Steve Linders, public information officer with the St. Paul Police Department, which is investigating the homicide relating to the warrants, wrote in a statement.

From the limited amount of video the city released, it's not clear how Minneapolis SWAT members approached the apartment or how they reacted after the shooting.

According to the Star Tribune, interim Minneapolis police chief Amelia Huffman said at a Thursday news conference that "both a knock and no-knock search warrant were obtained" for three locations within the building where the officer shot the man, but she did not elaborate.

The fatal shooting brings further scrutiny to the use of no-knock warrants and shines a spotlight on a police department that has faced criticism before. The city garnered significant national media attention in November of 2020 when it announced, amid a nationwide reckoning over police policies prompted in part by the murder of George Floyd by a Minneapolis police officer and the shooting of Breonna Taylor during warrant service in Louisville, that it was changing its policy.

Some touted as an "accomplishment" that Minneapolis Mayor Jacob Frey banned no-knock warrants. But the city did not ban no-knock warrants, and like most police department policies, its policy gave wide leeway to field supervisors to make decisions based on conditions they encounter and allows for no-knock warrants in certain situations.

Frey announced Friday night that he was temporarily banning police from seeking and executing no-knock warrants, though like the policy change 14 months ago, it still allows for no-knock warrants in certain situations.

Hennepin County Attorney Mike Freeman announced Friday that he asked Minnesota Attorney General Keith Ellison to join in his review of the shooting.

"We will be working with the Minnesota Bureau of Criminal Apprehension to ensure a thorough and complete evaluation," Freeman said in a statement. "Thereafter we will decide together, based on the law and evidence, whether criminal charges should be brought."

Ellison, in a separate statement, vowed to conduct a "fair and thorough" investigation, adding: "Amir Locke's life mattered. He was only 22 years old and had his whole life ahead of him. His family and friends must now live the rest of their lives without him."

The Minneapolis policy, as of Wednesday, allowed "unannounced entry" on high-risk warrants, which would "authorize officers to enter ... without first knocking and announcing their presence or purpose." A judge is supposed to indicate whether that is permitted.

The Minneapolis Police Department's SWAT team is generally supposed to be used for "high-risk warrants," as determined by an internal risk-assessment form.

"SWAT personnel shall be used in all other situations where a 'preplanned' entry in to a building or dwelling is necessary to arrest a suspect(s) who is believed to be armed and/or dangerous or when entry to the location may be hazardous or impeded because of warning systems, reinforced doors, or other impediments," according to the policy.

The city's warrant policy requires officers, in most cases, to announce "police" and "search warrant" before crossing the threshold of the door into a home, even on no-knock warrants. But a supervisor can decide whether that would "create an imminent threat of physical harm" and can allow officers to enter without announcement.

Huffman said it was unclear whether Locke is connected to St. Paul's homicide investigation.

"These events unfold in seconds but the trauma is long-lasting. A young man lost his life, and his friends and family are in mourning," Huffman said.

Officials with the St. Paul Police Department said no arrests have been made in the homicide investigation.

Minnesota Gov. Tim Walz, a Democrat, on Friday called for changes in the way search warrants are executed in the state, Locke's parents described their son as a law-abiding citizen who respected law enforcement, and community leaders and a gun rights group demanded transparency and accountability in the case.

Walz expressed his condolences in a statement.

"Minnesota made strides last year, passing statewide restrictions on the use of no-knock warrants," he said, calling for "additional changes to police policies and practices regarding the execution of search warrants."

"But the events leading to the death of Amir Locke illustrate the need for further reform," the governor said.

In a virtual news conference with civil rights attorney Ben Crump and other lawyers, Locke's parents described their son as an aspiring music industry figure who wanted to help young people.

"A mother should never have to see her child executed in that type of manner," said Locke's mother, Karen Wells.

Wells vowed to "fight everyday" to ensure justice for her son. At a news conference later Friday, Wells called for the officer who shot him to fired and prosecuted.

"It is clear to anyone that no lawful gun owner could have survived this situation," family attorney Jeff Storms said.

"The police department says they announced (their presence) at the threshold ... but you've all seen the video, there is no announcement prior to entering that threshold. They barge in before they identify themselves and they give Amir no time to save his own life."

"Mr. Locke did what many of us might do in the same confusing circumstances, he reached for a legal means of self-defense while he sought to understand what was happening," Rob Doar, a spokesman for the group, said in the statement.

Family attorneys say Locke was not named in warrant

Community activists and lawyers for Locke's family said the shooting demonstrated the failure of reforms that followed previous deaths at the hands of law enforcement.

In May 2020, Minneapolis Police Department officers were involved in the killing of George Floyd before later being fired and charged in his death. The subsequent national outrage over the killings of Floyd and Breonna Taylor -- who was shot by police in Kentucky as they performed a no-knock warrant entry -- led to sustained protests and calls for policing reform.

Taylor's deathprompted other cities across the country to move to ban or rein in no-knock, forcible-entry raids.

That summer, Minneapolis announced a new policy on no-knock entries, aimed at limiting the "likelihood of bad outcomes." Officials said that officers would be required to announce their presence and purpose before entering, except in certain circumstances like hostage situations.

"The City of Minneapolis told the public that it was limiting the use of no-knock warrants to 'limit the likelihood of bad outcomes,' Storms said. "Less than two years later, Amir Locke and his family needlessly suffered the worst possible outcome. Our City has to do better."

Minneapolis officers were executing the warrant tied to a homicide investigation in nearby St. Paul, according to Minneapolis police.

He begins to try and stand up, still wrapped in blankets, and is seen holding a gun. Three gunshots are then heard from officers.

A screenshot provided by the police department from the body camera video shows the weapon more clearly.

"The involved officer was just outside the frame in the direction the barrel is emerging from the blanket," said Huffman.

Based on the short video and image provided, CNN is not able to independently confirm where the gun was pointing, but has requested body camera video from the other responding officers.

The video was released at multiple speeds -- one version in real time, the other two edited by the city to be slowed down. In total, 14 seconds elapse in real time.

"As they got close, you can see, along with an individual emerging from under the blanket, the barrel of a gun, which comes out from the blanket," said Huffman. "The officer had to make a split-second decision to assess the circumstances and to determine whether he felt like there was an articulable threat, that the threat was of imminent harm, great bodily harm or death, and that he needed to take action right then to protect himself and his partners."

The initial release from authorities said "officers encountered a male who was armed with a handgun pointed in the direction of officers."

Officer Mark Hanneman, as identified by the City of Minneapolis, then shot at and hit Locke. The police department says aid was immediately provided as the officers carried him down to the lobby to meet paramedics.

Locke was taken to the Hennepin County Medical Center where he died, according to the police.

Locke died of multiple gunshot wounds and the manner of death is homicide, according to the county medical examiner.

Hanneman has been placed on administrative leave, as is policy, pending the ongoing investigation, a spokesperson for the City of Minneapolis said. CNN has attempted to reach Hanneman and has reached out to the Minneapolis Police Federation for comment but has not gotten a response.

"The Minnesota Bureau of Criminal Apprehension was notified immediately and is heading up the criminal investigation," Huffman said Wednesday.

A spokesperson for the St. Paul Police Department confirmed to CNN the homicide investigation that was the source of the original warrant is still active.

A gun was also recovered from the apartment, police said.

Crump said in a statement, "Locke, who has several family members in law enforcement and no past criminal history, legally possessed a firearm at the time of his death.

"Like the case of Breonna Taylor, the tragic killing of Amir Locke shows a pattern of no-knock warrants having deadly consequences for Black Americans," Crump said.

Taylor, a 26-year-old ER medical technician, was shot and killed by Louisville officers in her home during a botched police raid in March 2020.

A grand jury failed to indict any officers in her death. One officer, Brett Hankison, was indicted for blindly firing into a neighbor's apartment during the shooting. He has pleaded not guilty and trial proceedings are ongoing.

Correction: An earlier version of this story reported the wrong last name of Amir Locke's mother. She is Karen Wells.