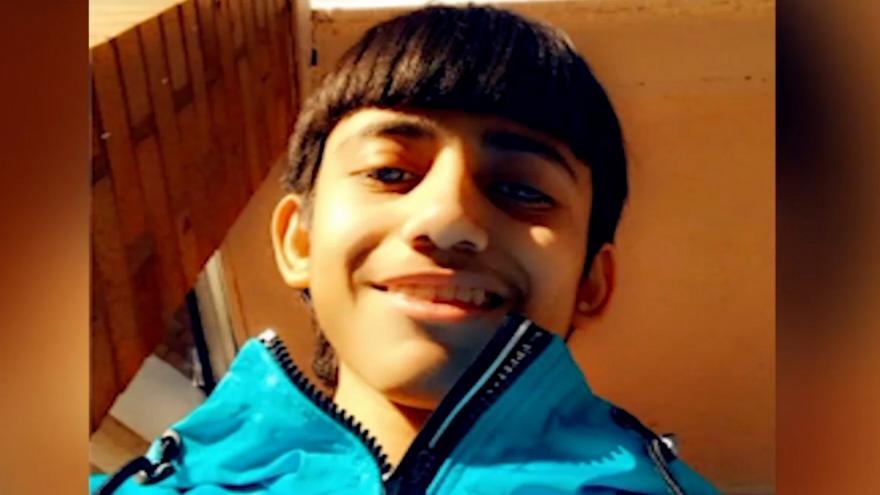 Authorities in Chicago have released body camera video that shows a 13-year-old being shot by police officers on March 29.

CNN teams have viewed the footage, which appears to show less than one second pass between the time Adam Toledo draws a handgun and an officer fires a single, fatal shot that hits him in the chest.

In a news conference Thursday ahead of the video's release, Chicago Mayor Lori Lightfoot said she had seen the videos and they are "incredibly difficult to watch."

"As a mom, this is not something you want children to see," Lightfoot said.

In a joint statement Thursday, the mayor's office and the attorneys for Adam's family said they met Wednesday and "both parties agree that all material should be released, including a slowed-down compilation of the events" that resulted in Adam's death.

The teenager was shot and killed early March 29, when officers responding to a "shots fired" call on the city's West Side saw "two males in a nearby alley," according to police. One of them was armed, according to police, and ran away. One officer opened fire, hitting one person in the chest.

"We acknowledge that the release of this video is the first step in the process toward the healing of the family, the community and our city," the joint statement said. "We understand that the release of this video will be incredibly painful and elicit an emotional response to all who view it, and we ask that people express themselves peacefully."

In her news conference, Mayor Lightfoot said there was no evidence in the footage she reviewed that Adam shot at officers.

"I don't want to get into the real substance of this because the independent investigation is going on, but I've seen no evidence whatsoever that Adam Toledo shot at the police," Lightfoot said.

Officers immediately tried to render aid after the shooting, she said.

The boy's family saw the video on Tuesday and asked that the video and other evidence not be immediately released to the public, according to a statement this week from COPA, which investigates all police shootings.

"COPA has remained sensitive to the family's grief and is carrying out this release in accordance with the City's Video Release Policy," it said in a statement Wednesday.

"COPA's core values of integrity and transparency are essential to building public trust, particularly in incidents related to an officer involved shooting, and we are unwavering in our commitment to uphold these values."

In an earlier statement, the law firm representing Adam's family said the viewing of the video was "extremely difficult and heartbreaking for everyone present," particularly the family.

"We also want to thank leaders and members of the Latino community for remaining peaceful in their protests and calls for justice," the statement said. "Adam's memory can best be honored by refraining from violence and working constructively for reform."

Lightfoot and community leaders called on any demonstrators to protest peacefully following the video's release.

The release of the footage comes as the nation is once again focused on unrest in the Minneapolis area, where former police officer Derek Chauvin is on trial for killing George Floyd, and where protests have broken out after the fatal police shooting of 20-year-old Daunte Wright in Brooklyn Center on Sunday.

Asked Wednesday if she would prefer for the video to be released after Chauvin's trial, the mayor said that was "not really part of the calculus."

"This is about being respectful and balancing the need for transparency with this grieving family that is having an extraordinarily difficult time."

Ahead of the video's release, the Chicago Police Department issued a new order to its officers governing some conduct at protests.

According to the new order, officers will not "disrupt, intimidate, harass, or discriminate against, or arrest," "make comments about the views," "use force as punishment or retaliation," "hinder or prevent members of the public from recording Department members," or "interrogate or otherwise question participants concerning their views" during First Amendment demonstrations, except in very limited circumstances.

Taken together, the two orders restrict interactions between police and protesters exercising First Amendment rights but orders them to distinguish between those and "disruptive, violent, criminal, or riotous behavior of members of the crowd."

Police can still order dispersal, make arrests and use pepper spray in cases where certain conditions are met.