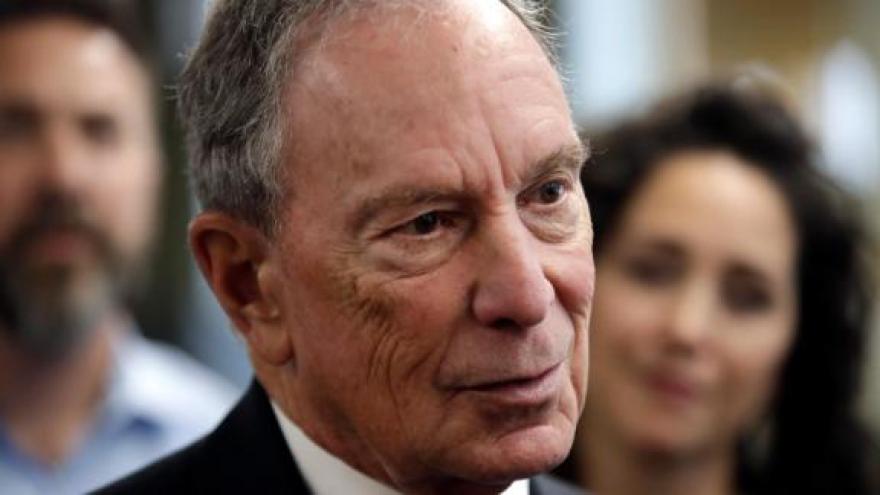 WASHINGTON, DC - NOVEMBER 19: U.S. President Donald Trump speaks to the media during a cabinet meeting at the White House on November 19, 2019 in Washington, DC.

(CNN) -- Michael Bloomberg is greasing the Democratic wheels ahead of a possible run for president.

The former New York mayor's political team has pledged over the last two weeks to unleash Bloomberg's financial firepower to bolster Democrats and damage President Donald Trump in 2020 -- whether the mayor launches his expected presidential bid or not.

While the spending is in line with Bloomberg's backing of Democratic causes for years, the new round of funding also appears to serve distinct political purposes: endearing himself to Democrats who are wary of his possible late entry into the 2020 race and assuaging concerns that his impending presidential campaign would divert funds away from the Democratic causes he's been bankrolling.

Bloomberg's team announced earlier this month that the former mayor plans to spend $100 million on an anti-Trump ad blitz in key 2020 battleground states, namely Arizona, Michigan, Pennsylvania and Wisconsin. That announcement was followed on Wednesday by his team pledging Bloomberg will spend up to $20 million on a voter registration drive targeting underrepresented groups, including African Americans, Latinos, Asians, young voters and rural populations in Arizona, Michigan, North Carolina, Texas and Wisconsin.

"If his path is through bringing his resources to bear, buying political love is time tested approach," said a senior Democratic aide, who requested anonymity to speak candidly about Bloomberg. "The advance announcement (of the spending) also silences potential critics because they wouldn't want to be taken off the nice list for being naughty."

Bloomberg has yet to officially decide to mount a late-entry presidential bid. But he and his team have been putting plans into place. The former mayor has filed to get on the ballot in both Alabama and Arkansas, two states with early filing deadlines, and Bloomberg aides formally filed his statement of candidacy with the Federal Election Commission on Thursday. Even still, a Bloomberg source tells CNN the filing is another step, but not an announcement or an indication of a final decision.

"Mike is committed to making sure that Trump isn't re-elected no matter what," said Bloomberg spokesman Marc La Vorgna.

In addition to trying to undermine Trump, Bloomberg seems to be attempting to quell Democratic fears that his role as a reliable spigot of money to the party won't change if he runs.

Bloomberg's money, so far, has been well spent.

His most recent burst of spending came this year, when the Bloomberg-backed group Everytown for Gun Safety poured $2.5 million into a series of key state legislature races in Virginia. The spending -- which made the Bloomberg-affiliated organization the largest outside spender in the elections -- worked: Democrats flipped the state legislature and now control the state's executive and legislative branches for the first time in a generation.

Bloomberg spent more than $100 million during the 2018 midterms alone, money that offered cash-strapped candidates who would go on to win their races a lifeline in the final weeks of the campaign. According to the Center for Responsive Politics, Bloomberg was the second most prolific donor in the midterms, only behind top Republican donors Sheldon and Miriam Adelson.

Still, Bloomberg's strategy probably won't stop political rivals from attacking him as another billionaire who is trying to buy elections.

Those attacks have followed Bloomberg throughout this political career. In 2001, when Bloomberg launched a long-shot bid for mayor of New York, his Republican primary rival accused Bloomberg of spending "grotesque amounts" and waving "his wallet at the public." The anti-billionaire messaging didn't work. Bloomberg won the election and two re-election campaigns.

Accusations of buying elections have been leveled against fellow billionaire Tom Steyer, who is mounting his own 2020 campaign after spending millions on efforts aimed at combatting climate change, boosting voter turnout and impeaching the President.

After Steyer qualified for his first debate earlier this year, some candidates slammed the billionaire and accused him of being part of an effort to "buy" his way onto the debate stage. And the fact Steyer remains on the stage while other elected leaders have failed to qualify continues to annoy a host of Democrats.

Bloomberg's approach is different than Steyer's though.

Unlike Steyer, Bloomberg will not appear in the $100 million digital anti-Trump ad buy he announced earlier this month. Steyer frequently featured himself in his own ads during his campaign to impeach Trump, to the point that voters often associate him with the ads and impeachment effort.

Bloomberg will focus his ads on undermining Trump, with messages like "a tweet shouldn't threaten our country's security" and "tantrums are not presidential."