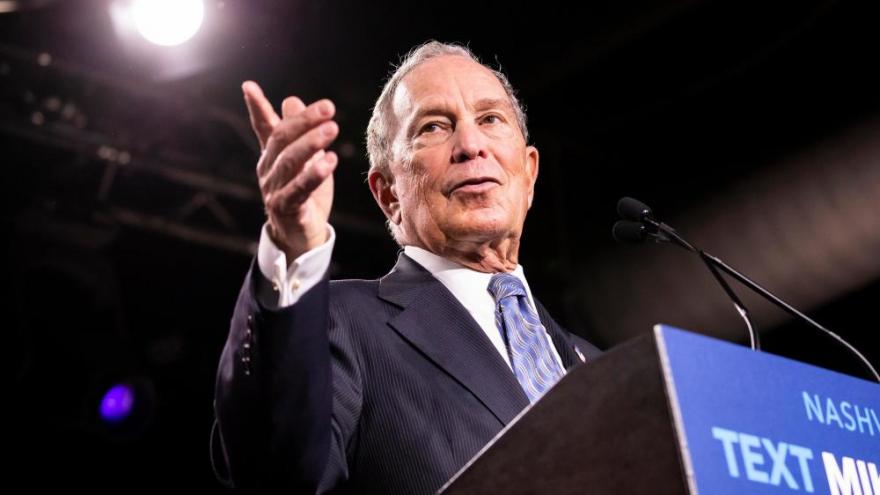 (CNN) -- Michael Bloomberg has qualified for Wednesday's Democratic presidential debate in Las Vegas, paving the way for the former New York mayor's first appearance on stage with his 2020 rivals.

Bloomberg met the Democratic National Committee-mandated polling threshold on Tuesday with a NPR/PBS NewsHour/Marist survey finding the former New York mayor at 19% nationally. The result is Bloomberg's fourth poll at or above 10% nationally, which was the requirement from the DNC to qualify.

Bloomberg is second in the poll behind Vermont Sen. Bernie Sanders, who is well ahead of the rest of the field with 31% support.

Bloomberg's presence on the debate stage injects a significant new variable into the event that falls just days before Nevadans caucus on Saturday. But the former New York mayor is skipping the first four contests, including Nevada, instead hoping to make his mark when several states vote on March 3, also known as Super Tuesday.

Bloomberg campaign manager Kevin Sheekey said in a statement Tuesday that the candidate is "looking forward to joining the other Democratic candidates on stage and making the case for why he's the best candidate to defeat Donald Trump and unite the country. The opportunity to discuss his workable and achievable plans for the challenges facing this country is an important part of the campaign process."

The five other qualifying candidates have all signaled they are ready to attack Bloomberg, whose standing in national polls has improved after he personally spent more than $400 million television, radio and digital ads publicizing his candidacy. And Bloomberg has recently come under intense scrutiny for his past comments on race and allegations that he made crude remarks and fostered a culture of discrimination against women at Bloomberg L.P. during the late 1980s and 1990s.

In the days leading up to the debate, Bloomberg has also shown he is prepared to take on Sanders, the candidate who has made taking on billionaires central to his message.

The debate will be the first significant campaign test so far for Bloomberg, who has, until recently, largely avoided engaging with directly with his Democratic primary opponents and hasn't been seriously questioned by voters on the campaign trail.

Bloomberg's campaign, anticipating that the former New York mayor could have qualified for the debate after he reached the threshold in three of the four needed national polls days ago, has been preparing the candidate by doing rounds of mock debates sessions in New York and while the former mayor has been on the road, multiple aides said. They have even been using podiums in some of these practice rounds in order to emulate the feel of a real debate, a Bloomberg aide said.

The same aides also told CNN that, based on the attacks the former mayor has taken over the last week, they are preparing for Bloomberg to be the focus of the debate on Wednesday. And in an attempt to lower expectations, aides noted how the other Democratic candidates have been seasoned after debating for months, while Bloomberg hasn't debated in years.

Bloomberg, after entering the presidential campaign in November, has spent hundreds of millions to vault himself into double digits nationally, and has built a campaign operation of over 2,000 aides in New York and across the country.

The former New York mayor's surging polls has coincided with more direct attacks from his rivals.

"I got news for Mr. Bloomberg, and that is the American people are sick and tired of billionaires buying elections," Sanders said at a Democratic dinner here in Nevada on Saturday.

Former Vice President Joe Biden said on Sunday that while "$60 billion can buy you a lot of advertising ... it can't erase your record.

"There's a lot to talk about with Michael Bloomberg," Biden said.

And Klobuchar said Sunday that she wanted Bloomberg on the debate stage because he "can't hide behind the airwaves" and needs to "answer questions."

In the NPR/PBS NewsHour/Marist poll, Biden stands at 15%, Warren is at 12%, Klobuchar stands at 9% and Buttigieg has 8% support.

Bloomberg has also had his record more closely scrutinized than when he initially got in the race.

Stark comments Bloomberg has made about the controversial stop and frisk policing tactic he oversaw as mayor have gained more attention. And the Washington Post published a story this weekend about allegations of past crude comments regarding women at the company he co-founded and owns.

The more direct comments from Bloomberg's Democratic opponents, as well as the newfound scrutiny of his record, suggest Wednesday's contest could focus considerable time on the former New York mayor.

But as the attacks against Bloomberg have risen, the former New York mayor has signaled he is prepared to fire back.

Bloomberg's campaign went after Sanders on Monday, faulting the Vermont senator for the derogatory comments his supporters often make online about other candidates.

The video showed Sanders calling for people who "hold different views" to "engage in a civil discourse," before "Really?" in block letters flashes on screen.