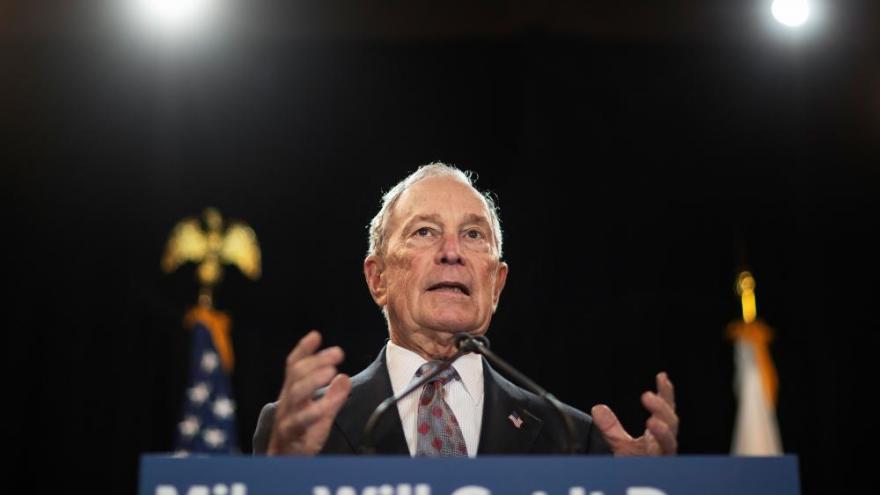 (CNN) -- Billionaire Michael Bloomberg plowed nearly $464 million into his bid for the Democratic presidential nomination through the end of January, new campaign filings show -- blowing past all previous records for self-funding candidates in his quest to face President Donald Trump in November's general election.

The media and business data tycoon spent more than $220.6 million in January alone -- much of it on advertising and to quickly assemble a campaign staff that now tops more than 2,000, his aides said. In all, Bloomberg has spent $409 million between November, when he entered the race, through the end of January.

The figures come a day after Bloomberg's weak performance in a contentious debate Wednesday in Las Vegas. The former New York mayor, in his first appearance on the Democratic debate stage, faced ferocious criticism from his rivals over his record at the helm of the nation's largest city, his policing policies and his treatment of women in his private ventures.

Bloomberg and his aides argue his vast resources and centrist positions make him the best contender to confront the President.

"Mike is the only candidate with the record and resources to build the national infrastructure Democrats need to beat Donald Trump," campaign manager Kevin Sheekey said in a statement Thursday.

In January alone, Bloomberg spent $126.5 million on television commercials. Another $45.4 million went to digital advertising, more than half of which went to Facebook, his filings show.

His campaign also sent more than $13.6 million last month to one of Bloomberg's companies, Hawkfish LLC, which serves as the campaign's digital ad agency. Another $2.1 million went to MRB4USA LLC, a firm that Bloomberg's media strategist Bill Knapp launched to work on the campaign.

The campaign also wrote checks totaling $45,000 in January to the consulting firm of one of his prominent endorsers, former Philadelphia mayor Michael Nutter, a "national co-chair" of the Bloomberg campaign.

All presidential candidates must file reports Thursday with the Federal Election Commission, detailing their fundraising and spending. The filings cover January activity only.

Bloomberg has continued to spend heavily this month on advertising in a push to overwhelm his rivals ahead of the Super Tuesday contests on March 3, when he will appear on the ballot for the first time. As of Thursday morning, he has spent more than $427 million on advertising, according to Kantar Media's Campaign Media Analysis Group.

The nearly half a billion dollars Bloomberg donated to his campaign through January dwarfs the spending by other rich candidates who have sought federal office. Trump, who partially funded his 2016 White House bid, spent a little more than $66 million of his own money and has relied on donations from others to fuel his reelection.

On Thursday, Trump and the Republican National Committee said their joint fundraising efforts had brought in $60.5 million in January. Team Trump started this month with more than $200 million in cash reserves, campaign officials said.

CORRECTION: This story has been updated to accurately reflect how much Michael Bloomberg has donated to his campaign through the end of January, according to new campaign filings.