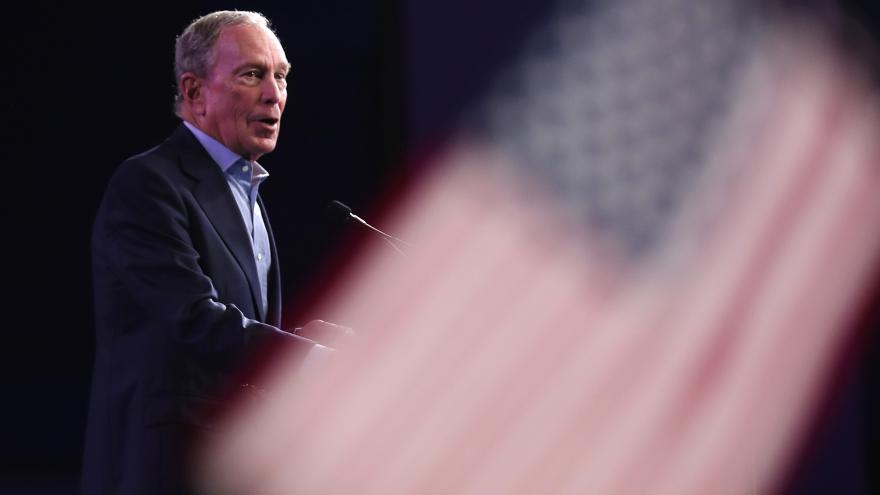 (CNN) -- Michael Bloomberg ended his presidential campaign on Wednesday and endorsed Joe Biden, closing out a costly run that saw the former New York mayor spend hundreds of millions of his own money to fund his late entry bid.

Bloomberg exits the race the day after a disappointing showing on Super Tuesday that left him with only a single victory: American Samoa.

"I've always believed that defeating Donald Trump starts with uniting behind the candidate with the best shot to do it. After yesterday's vote, it is clear that candidate is my friend and a great American, Joe Biden," he wrote in a press release.

One thing set Bloomberg apart from the rest of the Democratic field: Money. The billionaire spent millions on television and digital ads to propel his campaign and quickly built a staff of more than 2,400 people by offering top dollar to a range of political operatives. The full extent of Bloomberg's spending likely won't be fully known for weeks.

Bloomberg's campaign, based on its level of spending and support, was banking on strong showings in Oklahoma, Arkansas, North Carolina, Tennessee and parts of Texas, according to aides. But it was clear by the end of the night on Tuesday that the support they believed they had did not materialize.

Bloomberg's decision to get out now is a boon for the former Vice President, who was appealing to a similar range of moderate voters.

It comes shortly after Biden received the endorsements of former South Bend, Indiana Pete Buttigieg, Minnesota Sen. Amy Klobuchar, both of whom ended their campaigns and quickly backed Biden, in attempts to start coalescing moderates behind one candidate. The coalescing was a significant blow to Bloomberg because it undermined a central argument to his campaign -- that there is no strong moderate candidate that the party can rally around to take on Vermont Sen. Bernie Sanders.

The former New York mayor's decision to get out now is also an acknowledgement that his focus on Super Tuesday, as opposed to any of the early states, failed to work. Even with hundreds of millions spent to propel his campaign, Bloomberg was not able to overcome the operation and organization of Biden and Sanders.

Bloomberg entered the 2020 race in November, far later than any of his competitors, and set about offering Democrats a more moderate option to counter the rise of Sanders. Bloomberg, by using the slogan "Mike Will Get It Done," ran on his business record, arguing that the best person to take on President Donald Trump is a wealthier New York business leader.

Some top Democrats, many of whom were publicly worried about Biden's unsteady footing and Sanders' surge, endorsed Bloomberg's candidacy, believing the former Republican could be the best hope at defeating Trump. But intertwined with those endorsements was the hundreds of millions of dollars Bloomberg spent helping to elect Democrats in 2018 and earlier, including in some districts where local Democrats eventually backed the former mayor.

Bloomberg's campaign operated in its own universe for the first couple months. By not running in the first four nominating states, Bloomberg was largely divorced from the other Democratic campaigns for months. And though he tried to solely focus his campaign on Trump -- setting up, in the eyes of voters, a general election matchup between the two -- he was not actually actively running against the Republican President.

Even still, Bloomberg trained most of his rhetorical fire on Trump, hoping to draw the president into a fight that elevated his campaign.

"We know many of the same people in NY," Bloomberg wrote on Twitter. "Behind your back they laugh at you & call you a carnival barking clown. They know you inherited a fortune & squandered it with stupid deals and incompetence. I have the record & the resources to defeat you. And I will.

The attention from Bloomberg achieved its ultimate goal: getting under the President's skin.

Trump, throughout Bloomberg's campaign, tweeted attacks aimed at the former New York mayor and used his weekly campaign rallies to rail against him.

But even a frequent back-and-forth with the President wasn't enough to save Bloomberg's bid in the end.

The seminal moment of Bloomberg's downfall was the first Democratic debate he qualified for, in Las Vegas.

Bloomberg struggled on the debate stage, at times looking lost during the free-wheeling discussion. Compounding the problem was that he the former New York mayor, as the new candidate on the stage, took on a significant share of the attacks and was unable to defend himself.

The most powerful of those attacks came from Massachusetts Sen. Elizabeth Warren, who lambasted Bloomberg for lewd comments he allegedly made about women at his company in the 1980s and 1990s.

The debate also highlighted issues with Bloomberg's history, including overseeing the controversial "stop and frisk" policing strategy in New York, which many civil rights activists have labeled racist. He was also called out for his defense of "redlining," the biased housing practice that stopped banks from providing mortgages in low-income, largely minority neighborhoods. He said the ending of the practice was to blame for the 2008 collapse.

Bloomberg apologized for the policing tactic repeatedly and argued that the audio of him defending redlining was not an accurate reflection of his views, but the two issues hung over the former New York mayor's candidacy, especially with Democratic activists.

"I'd like to talk about who we're running against. A billionaire who calls women 'fat broads' and 'horse-faced lesbians.' And, no, I'm not talking about Donald Trump. I'm talking about Mayor Bloomberg," Warren said, referring to quotes attributed to Bloomberg despite it not being clear he made those comments.

Campaign aides, at the time, looked to spin the performance as the mayor just warming up indeed, Bloomberg's second debate was an improvement -- but the poor performance in Las Vegas removed some of the bravado the former New York mayor portrayed in his ads and raised questions in the minds of voters about how the person they saw on the debate stage would fare against Trump.

And the greatest irony from Bloomberg's campaign is that his run, while aimed at thwarting Sanders, likely helped the senator's run his run. This primarily played out on the debate stage in Las Vegas, where Bloomberg took a great deal of the attacks, despite Sanders being the front-runner.

Even more impactful, though, was how Bloomberg further fractured the anti-Sanders electorate, giving voters who did not want to support the Vermont senator another option.

Bloomberg's decision to exit the race could reverse that reality, handing Biden a needed win to thwart the self-proclaimed democratic socialist.

Bloomberg, a 77-year-old entrepreneur and philanthropist, made his fortune creating technology that bankers and traders use to access market data. After building a successful financial information business, he turned to politics.

He officially launched a bid to become mayor of New York in 2001. Despite running as a Republican in an overwhelmingly Democratic city, Bloomberg won the election and was reelected twice. During this second term, he switched parties and became an independent -- only to re-register as a Democrat in 2018.