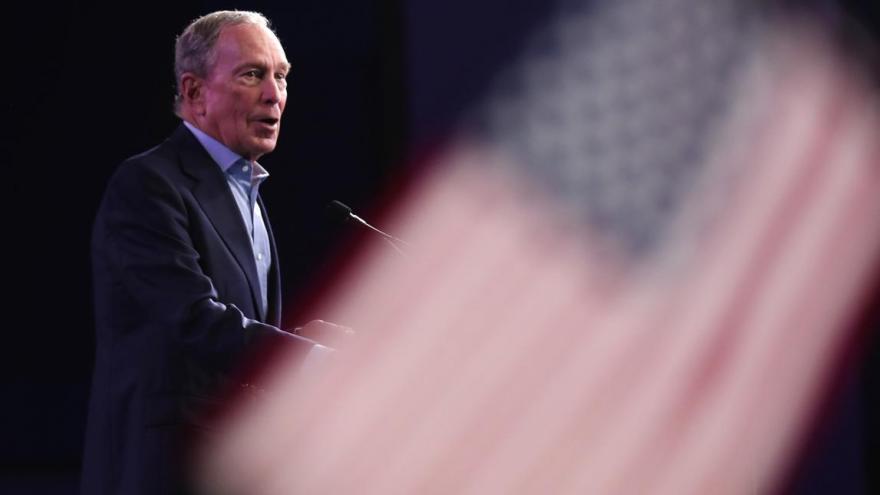 Michael Bloomberg's presidential campaign transferred $18 million to the Democratic National Committee, turning to the committee to fund and manage the effort to take down President Donald Trump instead of creating a Bloomberg-backed independent expenditure.

(CNN) -- Michael Bloomberg's presidential campaign transferred $18 million to the Democratic National Committee on Friday, turning to the committee to fund and manage the effort to take down President Donald Trump instead of creating a Bloomberg-backed independent expenditure.

The transfer, according to memos from both Democratic groups, will go directly to increasing the size and scope of the DNC's Battleground Build-Up 2020 effort, allowing the committee, according to an aide, to hire hundreds of organizers in a dozen key battleground states, including Arizona, Georgia, North Carolina, Michigan, Pennsylvania and Wisconsin.

The news of the transfer came on the same day that the campaign held a call informing staff members of its massive state field operation they were being laid off, sources told CNN.

A Bloomberg campaign spokesman attributed the layoffs to the "changing dynamics of the race." The spokesman added the Bloomberg operation has "given the DNC a list of our staff" and "will work to help the DNC hire and onboard our former staffers."

When he launched his late-entry presidential campaign, Bloomberg pledged to fund organizers in key battleground states through November, whether he won the nomination or not. The billionaire was unable to turn his self-funded campaign into any significant wins on Super Tuesday -- he only won American Samoa -- so he bowed out of the race and backed former vice president.

The money for this transfer is coming straight from Bloomberg's pocket, even if it had been in the former mayor's campaign account.

Bloomberg entirely self-funded his campaign, spending well over $500 million to keep the operation growing. The legal limit for Bloomberg -- as a person -- to donate the DNC would be in the hundreds of thousands, but because the money is coming from his campaign account, he is legally allowed to transfer millions to the DNC.

Bloomberg and his cadre of advisers had considered creating an independent expenditure to make good on his promise, but eventually came to the conclusion, according to the memo, that the race against Trump is "too important to have many competing groups with good intentions but that are not coordinated and united in strategy and execution."

Bloomberg built a vast state-based network during his presidential run, including dozens of offices across the country in key battleground states. The former New York mayor's campaign will also transfer the leases for some of its former state offices to state parties who want them. The transfers will be considered in-kind donations from the campaign to the state parties.

"Mike Bloomberg entered this race to ensure Democrats win -- keeping the House blue, flipping the Senate, winning key state and local races, and taking back the White House -- and this commitment through November helps do exactly that," reads the memo from Bloomberg's campaign to DNC Chair Tom Perez. "By supporting the Democratic Party, we look forward to November and taking on our unified goal of beating Donald Trump."

Perez said in a statement that the transfer from the Bloomberg campaign show the former mayor is "making good on their commitment to beating Donald Trump."

"This will help us invest in more organizers across the country to elect the next president and help Democrats win up and down the ballot," he said.

A DNC aide said that while the hundreds of Bloomberg organizers who had been employed by the campaign can apply for the organizing jobs with the committee, they will not be given preferential treatment and "will have to apply with everyone else."

The DNC has been building up its battleground operation for months and announced in January that it will begin to pour millions of dollars into six battleground states -- Pennsylvania, Wisconsin, Michigan, Florida, North Carolina and Arizona -- in preparation for a general election fight against Trump.

But Bloomberg's money will help significantly scale up that effort -- and buttress a committee that has struggled to keep up with Republican fundraising efforts.

"The dynamics of the race have also fundamentally changed, and it is critically important that we all do everything we can to support our eventual nominee and scale the Democratic Party's general election efforts," read the Bloomberg campaign memo. "We therefore believe the best thing we can all do over the next eight months is to help the group that matters most in this fight: The Democratic National Committee."

On Friday, the Bloomberg campaign held a call informing staff members of its state field operation they were being laid off, sources told CNN. The announcement was made by Dan Kanninen, Bloomberg's states director, according to people on the call.

There was an acknowledgment that it is unlikely all former Bloomberg staffers will get hired by the DNC as part of its coordinated campaign, which is an effort to work with the presidential nominee and local candidates. A DNC aide told CNN the jobs would also be open to people who did not previously work for Bloomberg.

After the Friday call the Bloomberg HR department sent out an email informing the field staff they would have until Wednesday to apply for DNC jobs in the states.

"This call actually provided a little more clarity," one Democratic staffer on the call told CNN. "This brings everything back to reality after the Bloomberg campaign."

The staffers in the top six battleground states of Wisconsin, Michigan, Pennsylvania, North Carolina, Florida and Arizona are a little more upset, a senior adviser tells CNN, because they anticipated being able to keep their jobs until November. And the salaries and benefits are considerably higher under Bloomberg than they will be at the DNC.

But a conversation in recent days with DNC officials and Bloomberg folks -- as well as with Biden advisers -- came to the resolution that they wanted staffers to have parity.

"The focus needs to be beating Trump and winning the White House," one senior Democrat familiar with the matter said. "Having some people being paid big Bloomberg salaries and others making DNC wages was not a good way to start this general election campaign."

The Bloomberg campaign had initially promoted the jobs as guaranteed through November, but a source familiar said the contracts for field staffers were technically "at will" and do not guarantee employment. The staffers will reportedly be paid through the first week of April and will have health care coverage through April, according to a source familiar.