Blinken speaks with families of US hostages and wrongful detainees 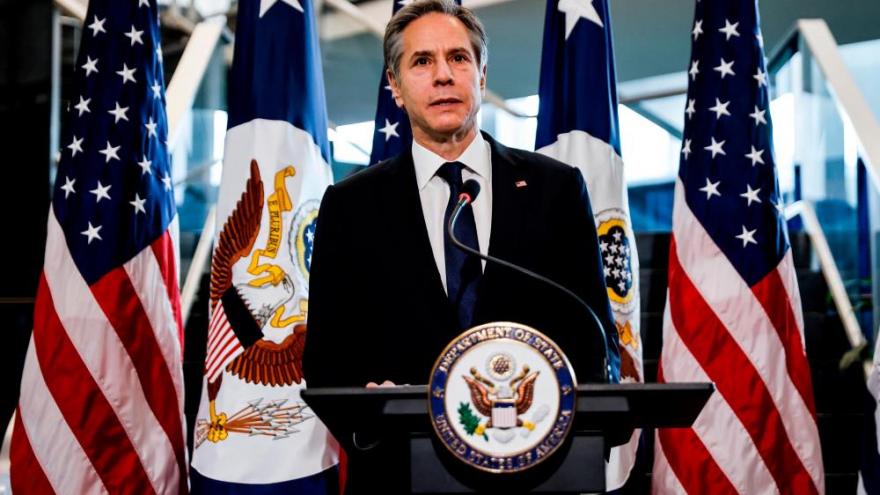 Secretary of State Antony Blinken, here speaking at the State Department in Washington,D.C. on January 27, 2021, has talked on Tuesday with the loved ones of Americans held hostage or unlawfully detained abroad.

(CNN) -- Secretary of State Antony Blinken talked on Tuesday with the loved ones of Americans held hostage or unlawfully detained abroad -- a gesture of support from the new administration that garnered high praise from the families who spoke with CNN.

It sent a promising signal, the families said, that the Biden administration will make the release of their loved ones a priority, and they expressed hope that the top US diplomat's investment would translate into bringing their family members home.

"It just made my heart sing. I felt like a whole weight had been lifted off my shoulders. I felt heard. I felt cared for. And it was just, it was awesome to feel that way," said Paula Reed, whose son Trevor Reed is imprisoned in Russia. "I was crying when we got off (the call); it was just so emotional."

According to the Foley Foundation, there are at least 43 publicly known hostage or detainee cases in 11 countries, including Iran, Afghanistan, Syria, Venezuela, Russia, Egypt, Turkey, Rwanda and Saudi Arabia.

The video call was well-attended by family members and officials from hostage advocacy organizations, including the Foley Foundation, according to those who spoke to CNN. Blinken took time beyond the allotted hour to field questions from those in attendance.

"Secretary Blinken was patient and kind to answer all of our questions and concerns with real concern for each individual case. We are truly thankful," Maryam Kamalmaz told CNN. Her father, Majd Kamalmaz, is a humanitarian worker who disappeared in Syria in 2017.

Gabriela Zambrano Hill, whose dad and uncle, Alirio Jose Zambrano and Jose Luis Zambrano, are detained in Venezuela as part of the so-called CITGO 6, called the meeting "extremely encouraging," telling CNN that "Secretary Blinken made it very clear that advocating for the release of US hostages is a priority for this administration."

"It truly was a great gesture from him to take time to speak with families like us -- and so soon, just a week since being confirmed," said Cristina Vadell, whose father, Tomeu Vadell, is another member of the "CITGO 6."

Elizabeth Whelan -- the sister of Paul Whelan, who has been detained in Russia for more than two years -- said Blinken promised to be "very clear and transparent with the families as to what was going on, what wasn't going to happen, so that we understood exactly where we stood regarding the different cases."

Some of the family members who spoke to CNN said they thought the call would buoy their spirits of their loved ones. Several said Blinken indicated that this was just an introduction and it would not be the last time he spoke with them.

In a readout of the call, State Department spokesperson Ned Price said that Blinken "stressed the importance the Biden-Harris Administration places on transparency in our communications with families and ensured that their family members are a top priority in our diplomatic engagements with both allies and adversaries."

Special Presidential Envoy for Hostage Affairs Roger Carstens, who was asked to stay on after serving during the Trump administration, said he left the call "feeling motivated, optimistic, and (frankly) emotional."

"@SecBlinken emphasized transparency in our partnership with families of U.S. hostages and wrongful detainees, and I am grateful for their willingness to put their faith and trust in us," he wrote on Twitter.

However, despite their optimism, several family members pointed out that work remains for the government as well as for the personal advocacy on behalf of their loved ones.

"The family is constantly involved in working for their loved ones' release until their loved one comes home," said Whelan, who described it as sometimes overwhelming.

Others also noted that it was a call in which they wished they didn't have to participate.

"Everyone doesn't really want to be on that call, right, because of what it means. It's unfortunate. But at the same time, I'm pretty sure that when everybody hung up, each family, no matter how encouraged they were or weren't with whatever he said, felt just at least a little bit better," Vadell said.

CLARIFICATION: A previous version of this story mischaracterized Elizabeth Whelan's description of Blinken in the meeting. She said he promised to be transparent in discussing their cases.