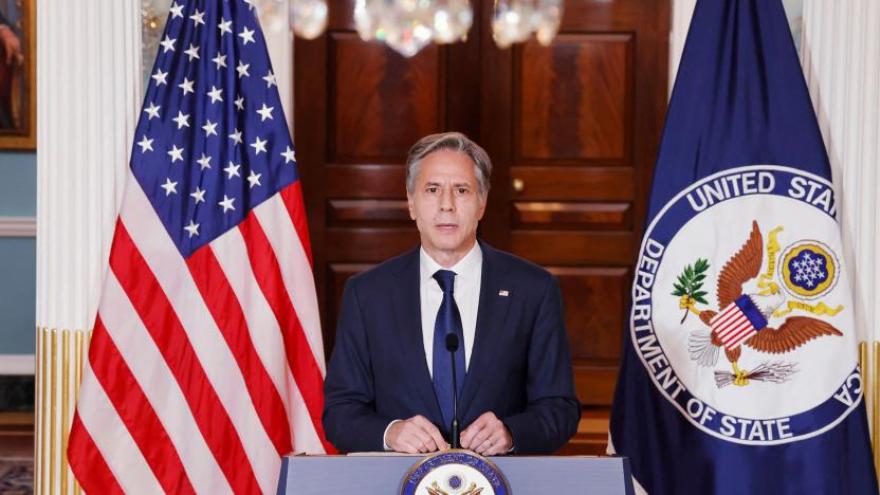 Secretary of State Antony Blinken, pictured here in Washington, DC on August 30, acknowledged "a fair amount of confusion" around charter flights from Afghanistan and said that the US government is "working to do everything in our power to support those flights and to get them off the ground."

(CNN) -- Secretary of State Antony Blinken on Wednesday acknowledged "a fair amount of confusion" around charter flights from Afghanistan and said that the United States government is "working to do everything in our power to support those flights and to get them off the ground."

The top US diplomat blamed the grounding of the flights in the north of Afghanistan on the Taliban, saying that the militant group was not allowing them to leave.

"The bottom line is this: those flights need to be able to depart. And we will work every day to make sure that they're able to do that," Blinken said during a press conference in Germany Wednesday.

The confusion around the flights in Mazar-i-Sharif has sparked tensions between the Biden administration and lawmakers and advocates who are involved in efforts to get people onto the planes and out of Afghanistan in the wake of the full US withdrawal from Afghanistan.

Blinken said Wednesday that the administration is "grateful for those efforts."

"As of now, the Taliban are not permitting the charter flights to depart," Blinken said, noting that the Taliban claimed "that some of the passengers do not have the required documentation."

"While there are limits to what we can do without personnel on the ground, without an airport with normal security procedures in place, we are working to do everything in our power to support those flights, and to get them off the ground. That's what we've done. That's what we will continue to do," he said.

The top US diplomat described it as "a complex situation." He noted that "many of these flights have been organized by NGOs or individuals who have a deeply felt desire to help people, and again, we're grateful to be working with so many passionate advocates, but there's also a risk of people looking to extort money from desperate and vulnerable people, which of course we want to prevent."

In some cases, "some of the groups claiming to have all of the documentations and arrangements locked down, unfortunately don't, often for good reason," Blinken said, adding that "this creates further complications."

Advocates involved in the efforts around the flights in Mazar-i-Sharif have also expressed frustration with the State Department, pointing to shifting guidance and a lack of clarity around the days-long delay.

Haazami Barmada, an independent humanitarian working with the organization Saraya International to get two planes off the ground, told CNN Wednesday, "We are unclear where the holdup is."

The Department initially indicated that the private charter flights would not be allowed to land at bases in the Middle East, according to an email reviewed by CNN. Over the weekend, the department told lawmakers that charters had received permission to land in Doha.

Speaking in the Qatari capital on Tuesday, the top US diplomat said that without personnel on the ground, they "don't have the means to verify the accuracy of manifests, the identity of passengers onboard these planes, aviation security protocols, or where they plan to land, among other issues. And these raise real concerns."

Sen. Richard Blumenthal's communications director disputed the assertion, saying that the Connecticut Democrat's office had submitted information for passengers on two of those planes that "goes above and beyond what was required for travel out of (Hamid Karzai International Airport) just one day earlier."

"If what we have submitted is not adequate, then the State Department's message is that they will not help Afghans to leave the country. That runs counter to the promises that Secretary Blinken and President Biden have made to our allies -- to the Afghans who risked everything for our country -- and we hope it isn't true," Maria McElwain said in a statement Tuesday.

"We are eager to work with the administration to ensure the safe take off of these flights," she said.

The State Department said overnight that Blinken was not intending to cast doubt on the manifests submitted by the senator's office.