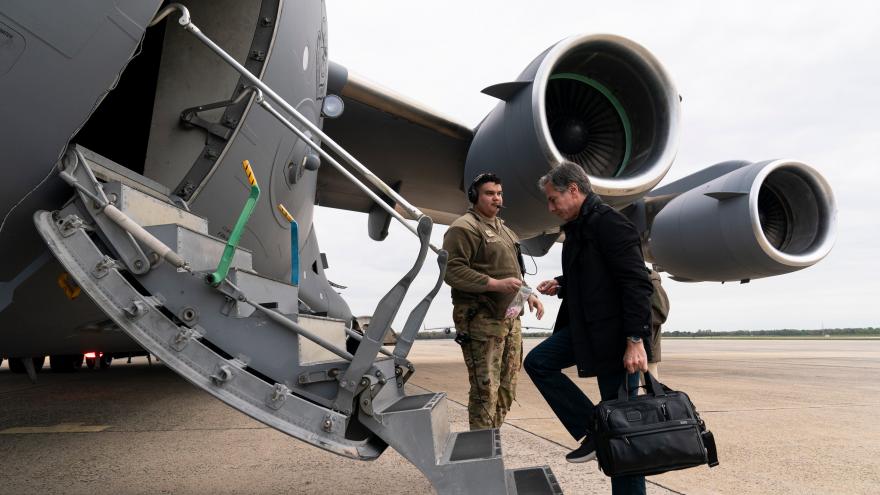 (CNN) -- US Secretary of State Antony Blinken said during an unannounced trip to Kyiv on Sunday that US diplomats would return to Ukraine this week, a senior State Department official said, characterizing the move as a strong message of solidarity from the United States.

Blinken and Defense Secretary Lloyd Austin traveled to the Ukrainian capital, where they met with Ukrainian President Volodymyr Zelensky and other Ukrainian officials, making them the highest-level US officials to have traveled to the country since the Russian invasion began in late February.

Speaking Monday at a press conference at an undisclosed location in Poland near the Ukrainian border following his trip to Kyiv, Blinken told reporters that Russian attempts to "subjugate Ukraine and take its independence" has "failed."

"Russia has sought as its principal aim to totally subjugate Ukraine to take away its sovereignty, to take away its independence -- that has failed. It has sought to assert the power of its military and its economy, we of course are seeing just the opposite, a military that is dramatically underperforming and an economy ... as a result of sanctions that is in shambles," Blinken said.

"We don't know how the rest of this war will unfold, but we do know that a sovereign independent Ukraine will be around a lot longer than Vladimir Putin is on the scene," he said.

As part of the resumed US diplomatic presence in Ukraine, diplomats will "start with day trips into the Lviv" and "will graduate to potentially other parts of the country and ultimately, to resume presence in Kyiv," according to a senior State Department official.

US President Joe Biden on Monday announced that he will nominate Bridget Brink as US ambassador to Ukraine.The post that has been without a confirmed ambassador since Marie Yovanovitch was recalled in May 2019. Brink is the current US ambassador to Slovakia.

Zelensky's office issued a readout of the meeting on Monday, stressing the importance of the visit and saying the country "counts on the support of our partners."

"We appreciate the unprecedented assistance of the United States to Ukraine," Zelensky said, according to the readout. "I would like to thank President Biden personally and on behalf of the entire Ukrainian people for his leadership in supporting Ukraine, for his personal clear position. To thank all the American people, as well as the Congress for their bicameral and bipartisan support. We see it. We feel it."

Officials reiterate no involvement by US forces

The traveling US press corps did not travel with the secretaries to the Ukrainian capital. In a background briefing, the State and Defense officials made clear that the US military would still not be involved directly in the war.

"The President has been very clear there will be no US troops fighting in Ukraine and that includes the skies over Ukraine," the defense official said, adding, "This visit does not portend actual involvement by US forces."

In the Monday press briefing, Austin said the US believes Ukraine can win the war against Russia with "the right equipment and the right support."

He said, "we're going to push as hard as we can as quickly as we can to get them what they need", adding that the nature of the fight between Ukraine and Russia has evolved. He said "they're now focused on is a different type of terrain. So they need long-range fire."

While officials hailed the trip as a testament to the US commitment to Ukraine, they have also faced questions about why Biden did not make the trip himself.

"The President of the United States is somewhat singular, in terms of what travel would require. So it goes well beyond what a Cabinet secretary would or what virtually any other world leader would require," the State Department official noted.

UK Prime Minister Boris Johnson visited the country earlier this month. Top officials from the EU and the Baltics have also visited Zelensky in Kyiv.

"The first tranche of artillery training is complete," Pentagon spokesperson John Kirby told reporters Sunday who traveled to the region with the secretaries in a briefing in Poland. "We train soldiers that will go back, and their colleagues will be able to follow and be all in on systems."

Some of the howitzers included in the most recent military assistance package for Ukraine are already in the country, the defense official said. The howitzers are expected to be effective at this stage of the war as it's shifted to the Donbas, where the terrain is suited to "long range" weaponry, Kirby said.

Kirby noted the speed with which the military assistance shipments has arrived in Ukraine and said that the decision for how to deploy the assistance is up to the Ukrainians.

"It's not taking more than 24 to 48 hours depending on what's being shipped and the availability of ground transportation to get it into Ukraine," Kirby said. "As we've said before, when (the assistance is) transferred to Ukrainian hands, it's Ukrainian property, and we are not dictating to them how fast they get it to the front line or what units get them."

Military officials described to reporters the ongoing concern among NATO countries about the threat that Russia poses to them.

"Not just here in Poland, I think many of the countries are concerned about Russia's next steps," said Lt. Gen. John Stephen Kolasheski, the commanding general of V Corps in Poland. "And are very pleased to have the US military here working side by side -- helping them develop their capabilities and capacity. ... I think they are recognizing that Russia is currently and will be a threat in the future."