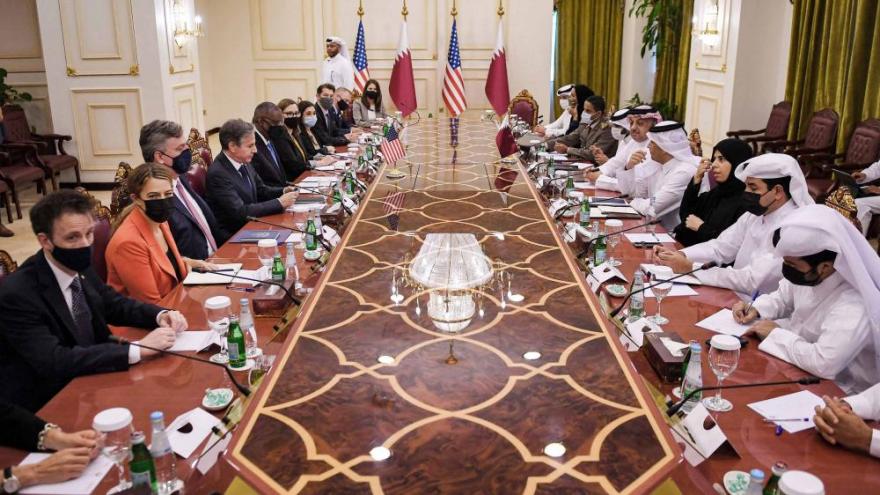 (CNN) -- US Secretary of State Antony Blinken rebutted GOP claims that the Taliban is holding Americans "hostage" Tuesday, as uncertainty over the militant group's promises to let Americans leave Afghanistan continued to roil Washington and as the Taliban named members of a designated terror group to its interim government.

Speaking at a press conference in Qatar Tuesday, Blinken said that the Taliban had assured the US that all American citizens and Afghan citizens with valid travel documents will be allowed to leave an airport in northern Afghanistan, despite Republican claims that the militant group is refusing to let planes take off.

Blinken spoke after Rep. Michael McCaul, the top Republican on the House Foreign Affairs Committee, said Sunday that he has received classified briefings that "hundreds" of American citizens and Afghan allies are stuck at the Mazar-i-Sharif airport in Afghanistan.

The Taliban "are not clearing the airplanes to depart," McCaul told Fox News, saying that "this is ... turning into a hostage situation where they're not going to allow American citizens leave until they get full recognition from the United States of America."

Blinken told reporters in Doha that he has heard nothing of the sort. "We are not aware of anyone being held on an aircraft or any hostage like situation in Mazar-i-Sharif," he said. The top US diplomat added that he intends to hold the Taliban to their promise to let flights leave the airport in Mazar-i-Sharif. "They've upheld that commitment in at least one instance in the last 24 hours with a family that was able to leave through an overland route," he said.

Blinken explained that an issue had come up at the airport with people who did not hold valid documents.

"There are groups of people who are grouped together. Some of them have the appropriate travel documents and American passport, a green card, a visa, and others do not," Blinken said. "And it's my understanding that the Taliban has not denied access to anyone holding a valid document, but they have said that those without valid documents, at this point, can't leave."

The State Department told Congress on Saturday that charter flights were grounded in Mazar-i-Sharif, but had permission to land in Doha. The message said it was the Taliban's decision to ground the flights.

Marina LeGree, whose organization is trying to get 34 at-risk women out of Afghanistan on those flights, told CNN Tuesday that the planes were still grounded.

She told CNN that the Taliban has said that those with visas will be permitted to leave, but those without will not be able to leave Afghanistan.

LeGree, who runs a nonprofit called Ascend, said the women in her group do not have visas, and that this was not an issue when the US government was manifesting the flights. LeGree told CNN she was discouraged by Blinken's remarks and felt as though the State Department was handing them over to the Taliban.

CNN reported August 17 that American personnel at the embassy in Kabul had destroyed the passports of some Afghans when they were getting rid of all sensitive materials in preparation for a full evacuation, according to a message Rep. Andy Kim's office was sharing with people seeking help with evacuations from Afghanistan.

It is unclear why the passports were destroyed, but it is possible diplomats determined it would have been dangerous for the documents to fall into the hands of Taliban militants who could then target those Afghans. But being without a passport creates major complications for Afghans who are still trying, desperately and urgently, to get out of the country.

Blinken's trip to Qatar, where he arrived Monday and was joined by Defense Secretary Lloyd Austin on Tuesday, is part of a larger "thank you" tour that will include Germany. Both countries were key to the US effort to execute the largest airlift in US military history, pulling about 125,000 people out of Kabul, and both countries are hosting intense diplomacy about Afghanistan.

Qatar has become a hub for diplomatic efforts, with the country mediating between the US, its allies and the Taliban. In Germany, Blinken will co-host a ministerial meeting on Afghanistan as the US and allies work to establish a unified position on Afghanistan and their approach to the Taliban as reports emerge of the group's violent crackdown on protestors and deepening fears about their treatment of women.

The ministerial agenda will almost certainly include a review of the Taliban's interim government, which gives key roles to veterans of the Taliban movement and their allies in the Haqqani Network, which the US has designated as a Foreign Terrorist Network for its deadly attacks on US and coalition military and civilian personnel and its ties to al Qaeda and the Taliban.

Government officials with bounties on their heads

The interim government line-up announced at a news conference in Kabul by Taliban spokesman Zabihullah Mujahid also includes Haqqani Network members who have been individually designated by the US for terrorist activity.

The new Prime Minister will be Mullah Mohammad Hassan Akhund, a long-time member of the Taliban and leader of the group's Shura or Leadership Council for about two decades. He is seen as an influential and respected religious figure in the movement rather than a military leader. His deputy will be Mullah Baradar, the head of the Taliban's Political Bureau who spent eight years in jail before being released as part of the Trump administration's efforts to hold peace talks with the Taliban in Qatar.

The interim government also includes two senior Haqqani Network figures who are on US and United Nations terrorism lists. Khalil Haqqani, the acting Minister for Refugees, was named a Specially Designated Global Terrorist in 2011 by US officials who placed a $5 million bounty on his head.

The Haqqani Network's leader, Sirajuddin Haqqani, who has been named acting Minister of the Interior, is also under US and UN terrorist designations. The State Department has also placed a $5 million bounty on his head.