Blinken: 'Deal or no deal' US will work to deter Iran nuclear capability 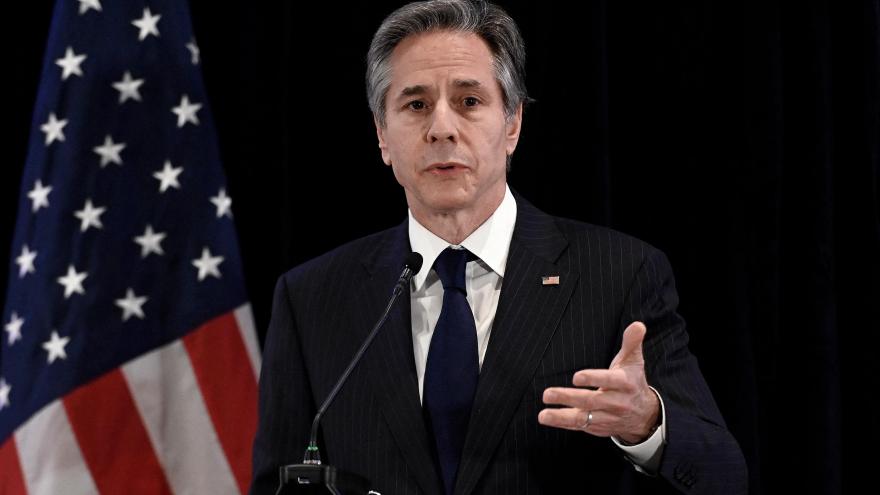 By Devan Cole, Adam Pourahmadi and Mostafa Salem,(CNN) -- US Secretary of State Antony Blinken committed Sunday to countering hostile actions from Iran regardless of whether the US can reestablish a nuclear agreement with the country, hours after the US special envoy to Iran stressed that a deal "is not inevitable."

"Deal or no deal, we will continue to work together and with other partners to counter Iran's destabilizing behavior in the region," Blinken said during a meeting with in Israel with Prime Minister Naftali Bennett.

The secretary said after the meeting that the US and Israel agree that Iran should not be allowed to have access to nuclear weapons and stressed the efforts to deter Iran's nuclear capability will continue even if negotiations on a nuclear deal ultimately fall apart. "Whether there is a return to the (Joint Comprehensive Plan of Action) -- the Iran nuclear agreement -- or not, that principle will not change, nor will our commitment to it," he said.

Countering Iran's nuclear capabilities has been a key foreign policy goal for the Biden administration, with the US hoping for a revival of a 2015 deal that would see Iran curb uranium enrichment in exchange for sanctions relief. Iran has increasingly broken away from its commitments under the agreement, and many believe it would be able to quickly develop nuclear weapons and pose a serious threat to security and stability in the Middle East if there isn't a breakthrough soon.

Blinken's comments came hours after Robert Malley, the US special envoy for Iran, told CNN's Becky Anderson at the Doha Forum in Qatar that a nuclear deal with Iran "is not around the corner and is not inevitable" due to remaining issues that "matter deeply" to the parties involved in the talks.

One of the remaining issues with the monthslong negotiations aimed at bringing Iran and the US back into compliance with the 2015 nuclear deal is the delisting of the Iran Revolutionary Guard Corps (IRGC) from the US Foreign Terrorist Organization list, a key Iranian demand. Malley said that the IRGC will remain sanctioned "regardless of what happens" with their terrorist organization listing.

In comments that appeared to run counter to Malley's view of the negotiations, Kamal Kharrazi, an adviser to Iran's supreme leader, told CNN in Doha that a deal was "imminent." He stressed that the IRGC "certainly has to be removed" from the terrorist organization list, while adding, "That's not the only problem. We have around 500 people and institutions sanctioned by the United States, and all of these or part of these have direct economic impact on relations between Iran and Western countries."

Malley also told CNN that he is currently in the Middle East to talk to regional partners, including Saudi Arabia, Qatar and Oman, about a potential revival of the nuclear deal.

"I think it's one of the lessons that President Biden took from the last two administrations, that we need to be more coordinated with the region and all of the countries in the region with whom we have close ties," he said.

US and European officials have for months warned that the time to save the 2015 agreement, which the US abandoned in 2018 under the Trump administration, is rapidly dwindling due to Iran's development of its nuclear program.

Negotiators have met on and off in Vienna for nearly a year to try to save the agreement. CNN reported earlier this month that talks to salvage the Iranian nuclear deal broke without an agreement, as negotiators left Vienna with a small number of issues left unresolved amid Russian demands that complicate a potential deal.