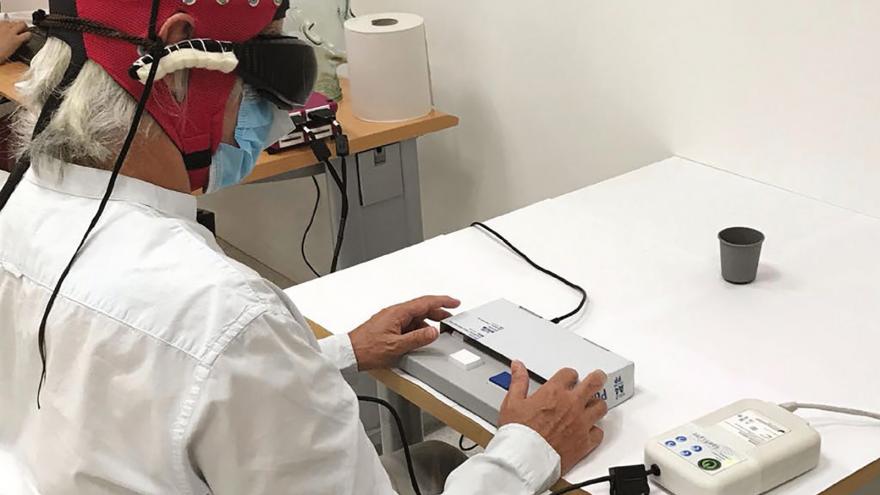 (CNN) -- A blind man has had his vision partially restored using optogenetic therapy and engineered goggles -- the first successful case of such therapy in humans.

Researchers treated a 58-year-old man who for 40 years had been suffering from retinitis pigmentosa -- a neurodegenerative eye disease where loss of photoreceptors can lead to complete blindness.

Retinitis pigmentosa changes how the retina responds to light, making it hard to see, and people with the condition lose their vision slowly over time, according to the American Academy of Ophthalmology.

Scientists used a form of gene therapy to reprogram cells in the eye's retina, injecting it with a viral vector and making it light sensitive. "In optogenetic therapy... we create an artificial photosensitive layer in this blind retina," researcher Botond Roska, professor in the faculty of science at the University of Basel, explained at a press briefing.

Months after the injection, researchers equipped the patient with engineered goggles which detected changes in light intensity, and would project corresponding light pulses onto the eye's retina to activate the treated cells.

Although the patient couldn't recognize faces or read following the treatment, he was able to perceive, locate, count and touch objects using his treated eye alone while wearing the goggles, researchers said in a study published Monday in the journal Nature Medicine.

Before the treatment, the patient couldn't see anything using the goggles. But months after the injection, the man could see the white stripes on a pedestrian crossing, detect objects including a plate, mug or phone and identify furniture in a room or a door in a corridor when using the goggles.

"Initially the patient couldn't see anything with the system, obviously this must have been quite frustrating. And then spontaneously he started to be very excited, reporting that he could see the white stripes across the street," José-Alain Sahel, professor of ophthalmology at the University of Pittsburgh School of Medicine and the Vision Institute in Paris, said at the press briefing.

Scientists also checked that the visual behavior was corresponding with the man's brain activity. The man was the first patient in the first cohort of the study who managed to be properly trained before the coronavirus pandemic disrupted the research.

"Retinitis pigmentosa is one of the most common causes of blindness in young people and results from the loss of the light-sensing photoreceptor cells in the retina at the back of the eye," Robert MacLaren, a professor of ophthalmology at the University of Oxford, told the Science Media Centre in London.

"In this trial the researchers used gene therapy to reprogram other cells in the retina to make them light sensitive and thereby restore some degree of vision. This is a significant milestone and undoubtedly further refinements will make optogenetic therapy a viable option for many patients in future," MacLaren, who was not associated with the study, added.

James Bainbridge, professor of retinal studies at University College London, said that the technology "might help people whose eyesight is very severely impaired."

"It is a high quality study. It is carefully conducted and controlled. The findings are based on laboratory tests in just one individual. Further work will be needed to find out if the technology can be expected to provide useful vision," Bainbridge, who was not involved in the research, told the Science Media Centre.