US troops, Afghans killed in suicide attacks outside Kabul airport 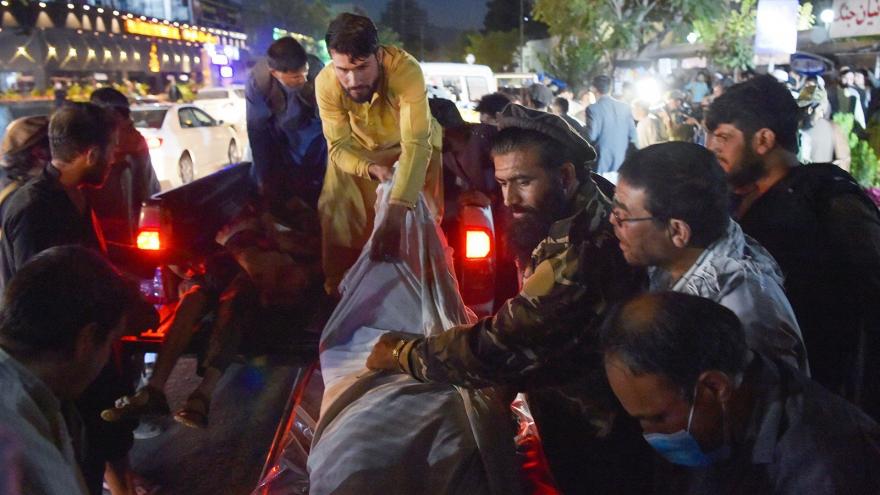 (CNN) -- Twelve US service members and dozens of Afghans have been killed in two bombing attacks outside Kabul's airport, according to the Pentagon and Afghanistan's Ministry of Public Health.

The deadly blasts came as the United States and other Western countries raced to complete a massive evacuation of their citizens and Afghan allies following the Taliban takeover of the country.

An official with Afghanistan's Ministry of Public Health told CNN on Thursday that more than 60 people were dead and 140 wounded.

Fifteen US service members were injured in addition to the 12 dead, said Gen. Frank McKenzie, Commander of US Central Command.

US officials have been warning over the past week that a threat of a terror attack at the airport was becoming more acute. Earlier on Thursday local time, US diplomats in Kabul warned American citizens to "immediately" leave several gates into the airport, citing security threats.

A US defense official had also told CNN that officials were concerned by a "very specific threat stream" involving the ISIS affiliate in Afghanistan.

US officials believe the group, ISIS-K, was likely behind today's attack but are still working to confirm its involvement, according to a senior US official and another source briefed on initial assessments. The second source told CNN it may take a few hours before US officials are able to identify the specific individuals who carried out the apparent suicide bombing.

Thousands of Afghans have been gathering at the airport's gates in recent days, trying to be evacuated.

Footage posted to social media on Thursday showed chaotic scenes of crowds of people trying to help the wounded amid bodies on the ground. Photos showed apparently injured people being transported away from the scene in wheelbarrows.

Kirby said earlier that one of the explosions happened "at the airport's Abbey Gate" and "at least one other explosion happened at or near the Baron Hotel, a short distance from Abbey Gate."

Abbey Gate has become the main entry point to the airport and primary security there has been provided by US Marines. The area around that gate had been used for holding refugees after they passed through the Taliban check points outside the airport, and before they were allowed to go to the airport.

Baron Hotel was used by British soldiers and other allies as an evacuation handling center to process evacuees, before moving them up to the Abbey Gate. It is unclear whether international forces were still in the area when the explosion happened.

The US Embassy in Kabul said US citizens who were at the Abbey Gate, East Gate, or North Gate of the airport "should leave immediately" in the wake of the blast.

"There has been a large explosion at the airport, and there are reports of gunfire," the security alert said. "US citizens should avoid traveling to the airport and avoid airport gates at this time," it added.

US President Joe Biden has been briefed on the attacks, a White House official said. In previous days, he had cited the risk of a terror attack among the reasons for getting US troops out of the country by August 31. He had also promised a swift and forceful response to any disruption to the operation.

Tens of thousands of people have so far been evacuated by the US military and NATO allies from the airport in the past two weeks. These evacuations are set to start winding down in the next few days, ahead of US' August 31 deadline for the final exit from a 20-year war in Afghanistan.

McKenzie said that the evacuations will continue despite the attack. "Our mission is to evacuate US citizens, third country nationals, special immigrant visa holders, US embassy staff, and Afghans at risk. Despite this attack, we are continuing the mission, the evacuation at best speed," he said.

He said the threats from ISIS were "imminent," raging from rocket attacks to "vehicle-borne" suicide attacks in addition to "walk-in" suicide attackers like the attack today.

McKenzie also said the US is sharing some intel with the Taliban for security purposes.

"They don't get the full range of information we have. But we give them enough to act in time and space to try to prevent these attacks," said McKenzie. He added that the US is using attack helicopters and other manned and unmanned aircraft to defend the airport in Kabul.

In the wake of the blast, French President Emmanuel Macron warned the situation around the airport had seriously deteriorated. "As we speak, we have 20 buses of dual citizens and Afghans that we would like to be able to repatriate," he said. "I cannot guarantee that we will be successful because the security situation is beyond our control."

UK Prime Minister Boris Johnson said the UK will continue its evacuation operation from Kabul despite the "barbaric" attack.

"I think [these attacks] are despicable, but I'm afraid that this is something we have had to prepare for. It isn't going to interrupt our progress, we are going to get on with our evacuation," he later added, speaking to British media in London.

German Chancellor Angela Merkel said Thursday that those who have not yet been able to access evacuation flights from Kabul will not be forgotten, adding that the German Foreign Ministry is still in negotiations with the Taliban.

"We know that the window of opportunity is closing. Tens of thousands of people have been rescued but I want to say again today: we will not forget those people who could not be rescued by the air bridge. Rather we will do everything we can to enable their evacuation," Merkel said.

Germany is in talks with Afghanistan's neighboring countries to secure safe border crossing for further evacuations to take place, according to Foreign Minister Heiko Maas.

Abdullah Abdullah, the chairman of Afghanistan's Reconciliation Committee under the previous government condemned the attacks on Thursday. "I strongly condemn the terrorist attack at Kabul Airport which killed and wounded a large number of the civilians," he said in a tweet.

Early on Thursday CNN reported the Taliban has taken away security from former Afghan President Hamid Karzai and Abdullah Abdullah.