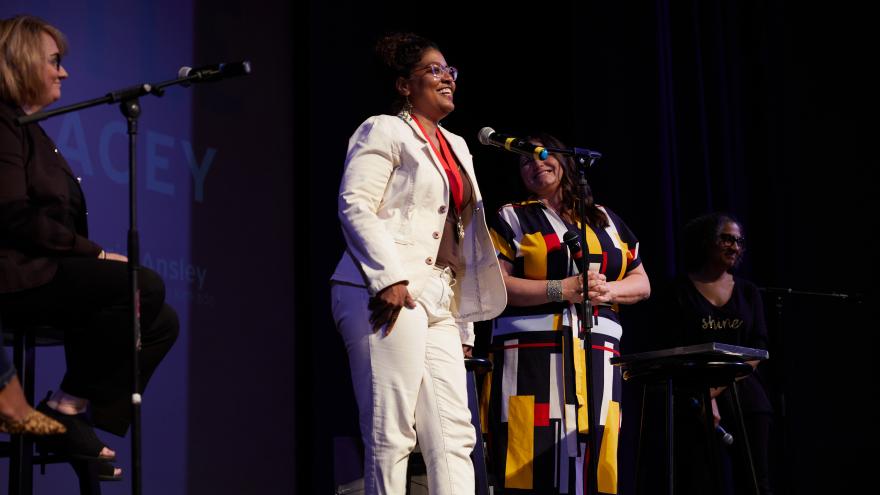 (CNN) -- A 55-year-old woman has been honored 38 years after her Illinois high school failed to make her its first Black valedictorian.

Tracey Meares was awarded the title on April 16 by the superintendent of Springfield Public Schools District 186 after a screening of the documentary "No Title for Tracey," which recounts her story.

Despite earning superior grades, Meares was shared the title of "Top Student" with a White student at her 1984 graduation. In the years before her graduation, the top student was named "valedictorian" and the second student "salutatorian," film director Maria Ansley told CNN.

Meares, a popular cheerleader in high school, said at the time she felt "upset and angry," and believes she was passed over for the title valedictorian because she's Black. All these years later, it's still painful, she said.

"The world that I live in, I'm powerful. I'm confident. Not vulnerable," she told CNN, referring to her success as a professor at Yale Law School, where she was the first Black woman granted tenure.

"The resonance that the film has had with so many people is also incredibly powerful," Meares said. "The ways structural racism and race discrimination can work are not the kinds of ways that people understand, right? It's not always really obvious. But it's still deep."

"Gestures of reconciliation are important and necessary," she added.

Making the documentary has expanded her understanding of racism, and she hopes it does the same for her audience, said Ansley.

"I hope by telling the story I can make others understand and hopefully grow."

Jennifer Gill, superintendent of the Springfield Public Schools District 186, said in a statement shared with CNN that "when we know better, we do better."

"By meeting Tracey and hearing about her lived experience, we know that honoring her with this title means so much more," Gill said.

"We have seen that high school experiences can have a profound, lifelong impact. It was an honor to have Tracey here and a privilege to learn from such an accomplished alumna."