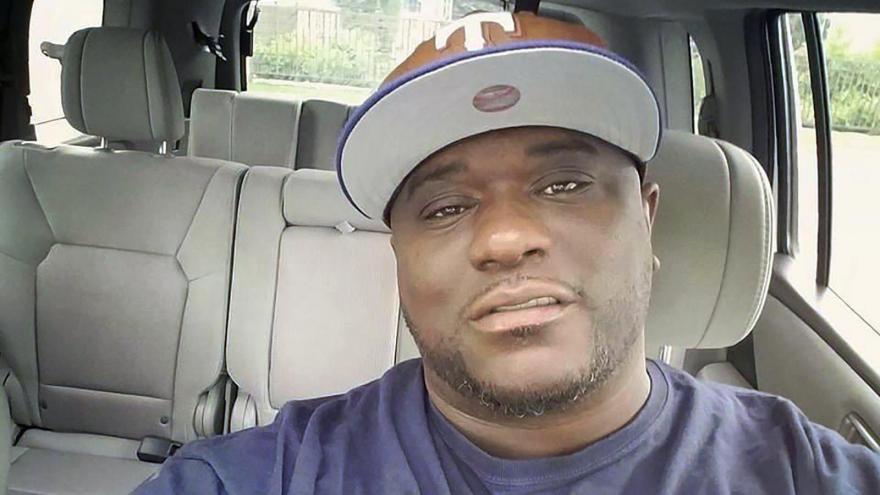 Javier Ambler's death was ruled a homicide, according to the death report from the Texas Attorney General.

(CNN) -- Newly released police video of a black man's 2019 arrest in Texas shows him saying "I can't breathe" several times not long before he died -- a death that is being investigated by a district attorney.

The video's release comes about two weeks after the death in police custody of George Floyd in Minneapolis -- an incident in which Floyd similarly said he couldn't breathe during his arrest.

Austin TV station KVUE and the Austin American-Statesman first reported on the video after months of records requests.

The Texas video shows deputies trying to handcuff Ambler as he is on the ground outside his car, which authorities say came to rest after a minor crash during the pursuit.

Ambler had exited his vehicle with his hands raised, but resisted deputies' attempts to handcuff him and refused to follow commands, a Williamson County Sheriff's Office report says. At least one deputy used a Taser on him, the report says.

The video is recorded by the body camera of an Austin police officer. By the time the Austin officer exits his car and walks up to the arrest site, deputies already are struggling with Ambler.

In the video, Ambler says "I have congestive heart failure," as well as "I can't breathe," several times.

About two minutes after the video first records Ambler saying he has heart failure -- and nearly 90 seconds after he's first heard saying he can't breathe -- deputies appear to have handcuffed Ambler.

But less than 30 seconds after he's handcuffed, officers appear to realize Ambler is unresponsive, as an officer is heard saying so in a radio request for emergency medical services.

After officers check for a pulse and find none, Ambler's handcuffs are removed, and officers can be heard administering CPR until medical units arrive.

Ambler was taken to a hospital in Austin, where he was pronounced dead at 2:37 a.m., according to a custodial death report from the state attorney general's office. That was less than an hour after the pursuit ended, according to authorities' reports.

The cause of death was congestive heart failure and hypertensive cardiovascular disease associated with morbid obesity, "in combination with forcible restraint," according to the custodial death report from the office of Texas Attorney General Ken Paxton.

The manner of death was homicide, according to the custodial death report.

Ambler was arrested in Austin in Travis County, south of where the pursuit started in neighboring Williamson County.

The district attorney of Travis County says she's leading an investigation into Ambler's death, but that it is being "stymied by a lack of cooperation" by, in part, the Williamson County Sheriff's Office.

Travis County District Attorney Margaret Moore said Monday she has requested body cam videos from the Williamson County Sheriff's Office, but has so far not been able to obtain them.

She intends to present the case to a grand jury this summer, she said.

The Williamson County Sheriff's Office did not return CNN's request for comment. But in a news release Tuesday, the sheriff's office said Moore had made "misleading statements."

"Any attempt to say we have slowed or otherwise impeded the investigation is absolutely false. We participated fully in the investigation launched by the Austin Police Department, the results of which have been forwarded to the Travis County D.A."

No Austin police officers are under investigation, Moore said.

Jeff Edwards, an attorney for Ambler's family, has called on Moore to prosecute the case.

"That anyone can watch that video and say that that was consistent with their use of force policies is just beyond outrageous," Edwards said.

"What I saw on the video is a man essentially begging for help," Edwards said.

How the chase unfolded

The chase started shortly after 1:20 a.m. in Williamson County, after Ambler failed to dim his vehicle's headlights as he drove past a deputy, according to a Williamson County sheriff's office incident report.

The deputy tried to stop Ambler, but Ambler kept driving, ultimately leading officers on a 22-minute chase that ended in Austin, authorities said.

Ambler collided with three fixed objects on and off the roadway during the chase, according to the Texas attorney general's custodial death report.

Ambler's Honda Pilot eventually stopped after a minor crash with a small grove of trees, according to the death report.

When the chasing deputy first approached the stopped vehicle, Ambler exited with his hands raised.

But after the deputy told him to get on the ground or "get down" several times, Ambler "turned toward the open driver door," and the deputy used a Taser on him, the Williamson County sheriff's office case report says.

In those first moments, the deputy was without backup, and Ambler appeared to be more than 200 pounds heavier than the deputy, the case report says.

The Office of Professional Standards in the Williamson County Sheriff's Department concluded that deputies acted "in accordance" with the department's policies.

"After reviewing the video evidence, OPS concludes the primary deputy 'JJ' Johnson and assisting deputies acted in accordance with the guidelines set in the WCSO policy and used objective reasonableness in the level of force used," the office said in the case report.

Moore, the district attorney in Travis County, said officials at the Williamson County Sheriff's Office have not been cooperative -- and that has made investigating the case problematic.

"This case has been so unusual. It is not typical for us to encounter obstacles to getting evidence, especially from another law enforcement agency," Moore said.

The Covid-19 pandemic prohibited setting a grand jury to hear the case in March, Moore said. Her office is trying to get the case heard in July, but it could be delayed until August.

"It's important, in today's climate with the heightened response to officer-involved incidents, that the public know we are prosecuting this case, are taking it to the grand jury and we will do everything within our power to see that justice is done here," she said.