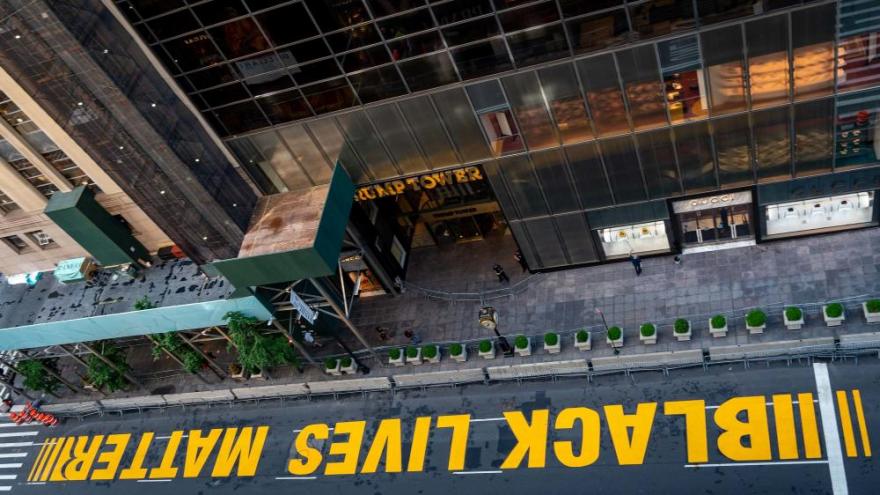 The Black Lives Matter mural was painted on Fifth Avenue in front of Trump Tower.

This marks at least the fourth time the mural has been vandalized since it was created on July 9.

A 32-year-old Rochester, New York, resident allegedly approached the mural just after 10 a.m. Sunday, threw white paint over a portion of it and smeared it with his hands, NYPD Detective Carrie Reilly said. Mark David Hutt was arrested and charged with criminal mischief and given a desk appearance ticket, Reilly said.

The NYPD doesn't track the number of times the mural has been vandalized, Reilly said. CNN has previously reported on three separate incidents surrounding the mural last week.

CNN has reached out to the New York City mayor's office for comment and to determine if the office keeps track of how many times the mural has been vandalized.

Earlier this month, a spokeswoman for the mayor called the vandalism to the mural "unacceptable" and said the city "will absolutely fix it."

The mural was first vandalized about four days after it was created, when an unnamed suspect dumped red paint on the V in "Lives." The police department said it was investigating the vandalism.

On July 17, surveillance video captured three individuals "pouring and smearing paint on the mural and one female spreading flyers at the scene," police said.

When police arrived, they arrested four people who had blue paint on their hands and clothing.

The latest incident occurred last weekend, when two women from Staten Island were arrested after they were seen pouring paint on the mural.

New York City's mural, similar to the one commissioned by Washington, DC, Mayor Muriel Bowser, was painted on Fifth Avenue in front of Trump Tower earlier this month. The building is home to the Trump Organization's headquarters.

The mayor responded, "Here's what you don't understand: Black people BUILT 5th Ave and so much of this nation. Your "luxury" came from THEIR labor, for which they have never been justly compensated. We are honoring them. The fact that you see it as denigrating your street is the definition of racism."