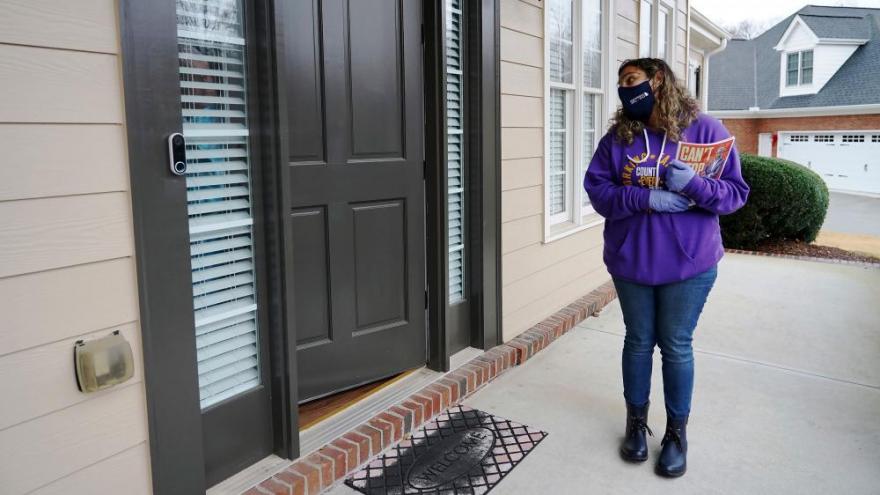 Stephanie Lopez-Burgus talks to a voter while canvassing in Lawrenceville, Georgia.

(CNN) -- Black Georgia voters showed up in droves for the state's pair of US Senate runoffs and voting rights groups say the high turnout plus aggressive organizing efforts helped solidify a historic win.

Rev. Raphael Warnock, the senior pastor of the historic Ebenezer Baptist Church in Atlanta, was elected on Tuesday to be the first Black senator from Georgia, CNN projected early Wednesday morning. The control of the US Senate now comes down to Republican David Perdue, who is running to keep his seat against Democrat Jon Ossoff.

Warnock's win is a repudiation of Republican Sen. Kelly Loeffler and her adherence to President Donald Trump, who voting rights activists say has attempted to suppress Black voters by accusing majority-Black cities such as Atlanta of fraud in the general election after he lost to Biden.

Black-led voting groups spent the last six weeks knocking on millions of doors, registering voters, distributing mailers, hosting events and partnering with Atlanta hip-hop artists to expand their reach. Their efforts came as Atlanta was thrust into the national spotlight following Biden's victory that flipped Georgia blue after he won the state by more than 11,000 votes. In the days leading up to the Senate runoffs, Black women such as Stacey Abrams and LaTosha Brown once again emerged as the leading voices, appearing on social media, national television and bus tours to urge Black people to vote.

Organizers say get-out-the-vote efforts increased participation from Black voters who didn't vote in November or may not have otherwise voted in a runoff.

Nse Ufot, CEO of the New Georgia Project, said this momentum made it hard for Black voters to ignore their significance to the Democratic party. Black voters, she said, also recognized the high stakes: if Democrats win both seats, they take control of the US Senate.

"The margins are so small that every action, including your vote, matters and will make a difference," Ufot said. "Black voters got that message. Black voters recognized that we need to complete the task."

Many voting rights activists say Georgia's increasing diversity has created a path to victory for Democrats. The number of Black voters has grown considerably in the past two decades and represented a third of the state's electorate in 2019, according to the Pew Research Center.

Yet, Brown said Trump's voter suppression are "frustrating" for Black voters and many turned out because they want to protect their constitutional rights and end "structural racism."

And with all eyes on Georgia, Brown said she has been able to garner more support in her efforts to get Black voters to the polls.

"There are resources in the state that normally aren't in the state," she said. "I think now people are seeing the significance of Black voters and how we can impact this election based on how they saw we impacted the general election."

Charles Bullock, a professor of political science at the University of Georgia, said in early voting, the Black vote was "especially powerful."

He said Black voters have been more enthusiastic in part because campaign efforts, including in-person contacts, have increased compared to the presidential election.

"One of most effective ways to get someone to vote is to have a supporter come and knock on your door and say, 'Please go vote,'" Bullock said.

Bullock said Warnock had also driven Black voters to the polls because his win is historic.

Warnock, a senior pastor at Ebenezer, the former church of Martin Luther King Jr., has used the pulpit to preach against police brutality and racism in the past. He was also the officiant for the funerals of the late Congressman John Lewis, a civil rights hero, and Rayshard Brooks, a Black man who was killed by an Atlanta police officer last June.

Martin Luther King III said there was a lot at stake for Black voters in the Senate runoffs.

Last month, Senate Majority Leader Mitch McConnell rejected a bill to increase stimulus checks to $2,000, which would have provided much-needed money for Black families who have lost jobs and been sickened by Covid-19 at higher rates than white people during the pandemic.

McConnell has also refused to take up the George Floyd Justice in Policing Act -- which would end certain police practices, such as the use of no-knock warrants and chokeholds -- and the John Lewis Voting Rights Advancement Act that looks to stop the racial discrimination of voters.

King III said if Warnock and Ossoff won, Democrats could pass these three bills that would benefit Black Americans.

A refusal to be alienated from politics

King credited grassroots organizing for engaging Black voters in the Georgia saying "you meet people where they are." The strategies used to turn Georgia blue should be replicated in other reliably red states throughout the Deep South, he said.

"2020, it showed that if you are diligent and determined that there can be a victory," King said. "That mobilized and created enthusiasm (with Black voters) all across the community."

The hip-hop community also played a role in getting Black voters to the polls.

Atlanta-based rapper Jeezy, one of several hip-hop artists who turned their focus to boost turnout, said the Senate runoff is the first time in years that Black voices have a chance to really count.

"We have to understand what our value is. For the longest time my culture (felt) like we've been alienated from politics and now we have a say," Jeezy said. "At this point we're all into politics because it's our world. If we don't say anything or do anything, we get pushed to the wayside."

In November, Abrams joined him and rapper Gucci Mane on Verzuz music battle watched by at least 1.8 million people to encourage viewers to vote in the Georgia runoff elections.

Jeezy wrote an op-ed about the election for Rolling Stone, performed in a drive-in concert to encourage voters on Sunday and set up an AR experienced at some polling locations for Election Day.

The Georgia US Senate races attracted enormous attention due to the stakes for the first years of the Biden administration and the state's shift from red to purple. Bullock, the University of Georgia political science professor, told CNN that the Senate elections could be the first in which urban Georgia casts more votes than rural Georgia.

"We've seen tremendous enthusiasm in the early voting numbers, both in person and by mail, and we know that while Democrats will have a lead when polls open ... Republicans are expected to have a strong Election Day," said Seth Bringman, a spokesman for Fair Fight Action, a voting rights organization founded by Abrams.