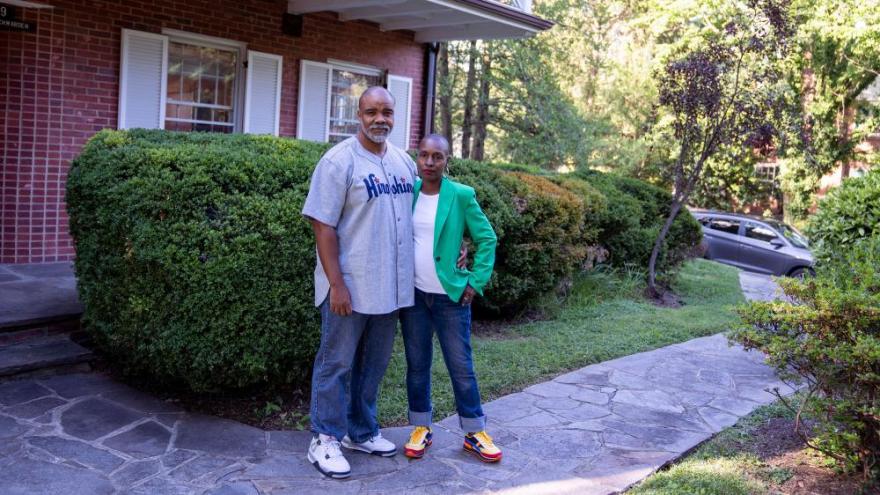 Nathan Connolly and Shani Mott are suing a local real estate appraiser and an online mortgage loan provider, alleging that the housing appraisal they received was unfairly low due to their race.

(CNN) -- A Maryland couple has sued a local real estate appraiser and an online mortgage loan provider, alleging that the housing appraisal they received was unfairly low due to their race, in violation of the Fair Housing Act, after a second appraisal returned a result nearly $300,000 higher.

Nathan Connolly and Shani Mott filed suit against 20/20 Valuations LLC, its owner Shane Lanham, and loanDepot.com on Monday, alleging the defendants 20/20 Valuations LLC and its owner "discriminated against Plaintiffs by dramatically undervaluing their home in an appraisal because of Plaintiffs' race and their home's location adjacent to a Black census block, notwithstanding that it is also located within Homeland, an affluent, mostly white neighborhood," and loanDepot.com discriminated against them by relying on that appraisal in denying their refinance loan.

According to the complaint, Connolly and Mott are Black professors at Johns Hopkins University who applied to loanDepot.com to refinance the mortgage on their four-bedroom home in Homeland, Maryland, a predominantly White Baltimore neighborhood.

Lanham's company, 20/20 Valuations, performed the appraisal for loanDepot and returned a valuation that was more than $75,000 below the conservative estimate of valuation which loanDepot had given the couple, according to the lawsuit. LoanDepot denied the couple the mortgage refinance because of the low valuation, according to the complaint.

"Plaintiffs were shocked at the appraisal and recognized that the low valuation was because of racial discrimination. They told this to their loanDepot loan officer and challenged the appraisal in a detailed letter," the suit reads.

Gabriel Diaz, an attorney for the couple, told CNN the lawsuit represents his clients' point of view.

Connolly and Mott later re-applied with another lender, and "whitewashed" their home, according to the lawsuit. This included removing photos of their Black family from the home, and having a White colleague present the property to the appraiser. The suit claims this valuation came back at $750,000, more than a quarter of a million dollars higher than 20/20 Valuations' appraisal of $472,000.

According to the lawsuit, Lanham allegedly used an appraisal method where he compared the couple's home to properties in a majority-Black local area, instead of the rest of Homeland.

"Defendant Lanham's decision to geographically limit the area from which he selected comparable sales reflected his belief that, because of their race, Dr. Connolly and Dr. Mott did not belong in Homeland, an attractive and predominantly white neighborhood, and that a home with Black homeowners located adjacent to a predominantly Black area is worth less than if it were in the whiter areas that he deemed 'the heart' of Homeland," the lawsuit alleges.

"While appraisals are performed independently by outside expert appraisal firms, all participants in the home finance process must work to find ways to contribute to eradicating bias," Fine said.

The couple allege that Lanham's "dramatically lower valuation reflected his beliefs that a Black family did not genuinely belong in Homeland and could not be the owners of a higher valued home."

"Lanham violated professional standards to devalue Plaintiffs' home because of these racist beliefs. Defendant loanDepot relied on Lanham's appraisal despite being informed that it was infected by discrimination and stopped answering or returning Plaintiffs calls once they challenged the appraisal on that basis," the suit states.

The couple is seeking damages and relief from Lanham, 20/20 Valuations LLC, and loanDepot for violations of the Fair Housing Act, the Equal Credit Opportunity Act, the Civil Rights Act of 1866, and Maryland Fair Housing Laws, according to the complaint.

The couple's lawsuit is the latest example of the difficulties and discrimination some Black homeowners say they face.

Last year, a Black California couple filed a lawsuit in federal court in San Francisco, arguing that racial discrimination played a role in the low valuation of their home.

Tenisha Tate-Austin and her husband became suspicious when the Northern California home they spent years renovating was valued by an appraiser far lower than they expected. When they asked for a second opinion, a White friend pretended to own their home and they removed all artwork and photos that could show that it belonged to a Black family. The new appraisal for their home in Marin County was more than $1.4 million and nearly half a million dollars higher than the previous estimate, they told CNN at the time. Earlier this year, the Department of Justice filed a statement of interest in the case, which is still pending.

And in Indiana last year, when Carlette Duffy concealed that she was Black, she told CNN her home's appraised value more than doubled.

Home appraisals fall within the scope of fair housing and fair lending laws. More than 50 years after the passage of the Fair Housing Act, the racial homeownership gap is wider than ever. In 2021, for example, the Black homeownership rate was 44% while the White homeownership rate reached 74% according to the Census Bureau.

Homeownership is the primary contributor to multi-generational wealth building for Black and Brown households, according to research highlighted in a report from the National Association of Realtors (NARS).

But bias in home valuations limits the ability of Black and Brown families to see equitable financial returns associated with homeownership, the NARS report said.

"The goal with the lawsuit is to get a measure of justice for [Connolly and Mott] and what they experienced in the form of monetary compensation, but I think relatedly there is the question of education," Diaz told CNN.

"I think that this is an issue that is not properly understood, not widely understood. Hopefully, the case will allow people to understand and appreciate and also change the anger so that this doesn't happen to people going forward," Diaz said.