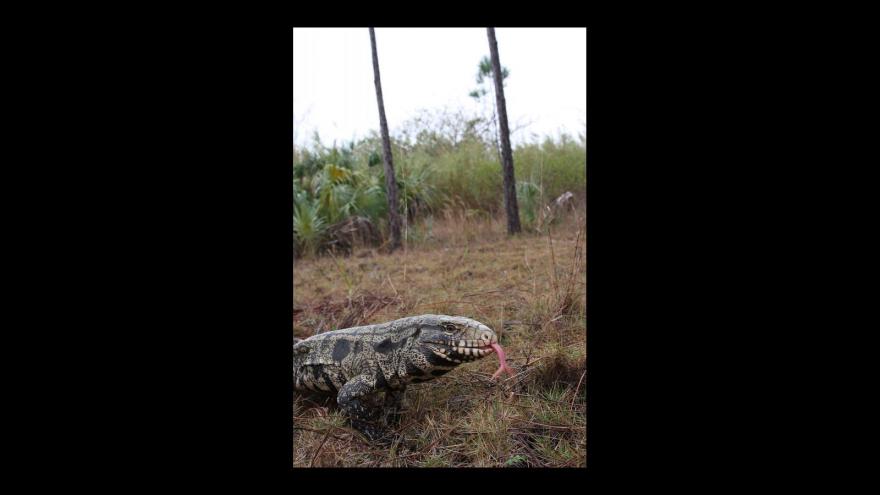 (CNN) -- South Carolina officials have documented the first confirmed sighting of a black and white tegu lizard, a non-native species that can have a detrimental impact on the state's wildlife.

The female lizard, found and removed from Lexington County, measured about 2.5 feet long, the South Carolina Department of Natural Resources (SCDNR) said in a news release on Friday. The species can reach up to 4 feet and weigh more than 10 pounds.

"The introduction of any non-native species can have serious negative impacts on native wildlife. Black and white tegus are no exception," SCDNR herpetologist Andrew Grosse said in a statement.

"Tegus mature and reproduce quickly, though most concerning may be their preference for eggs and the potential impacts to our native ground-nesting birds like turkey and quail, as well as other species such as the state-endangered gopher tortoise."

The lizards, native to South America, are voracious omnivores that hunt birds, small mammals, reptiles and amphibians. They also eat fruits, vegetables, insects and eggs. Along with posing a risk to native species, they may also spread exotic parasites to native wildlife or even cause the bacterial contamination of crops.

Black and white tegu lizards established themselves in Georgia and Florida, "likely as a result of release or escape," according to the news release. As a non-native species, the animals are not protected by state wildlife laws or regulations.

The SCDNR has received multiple sighting reports since May, but this is the first time it has been confirmed. The species does not pose a threat to pet dogs or cats, and are not considered aggressive toward people.

Officials are urging anyone who spots one of these lizards to take a photo and report where and when it was seen.