'Birtherism' to the 'Big Lie': Inside Obama's fight to counter disinformation 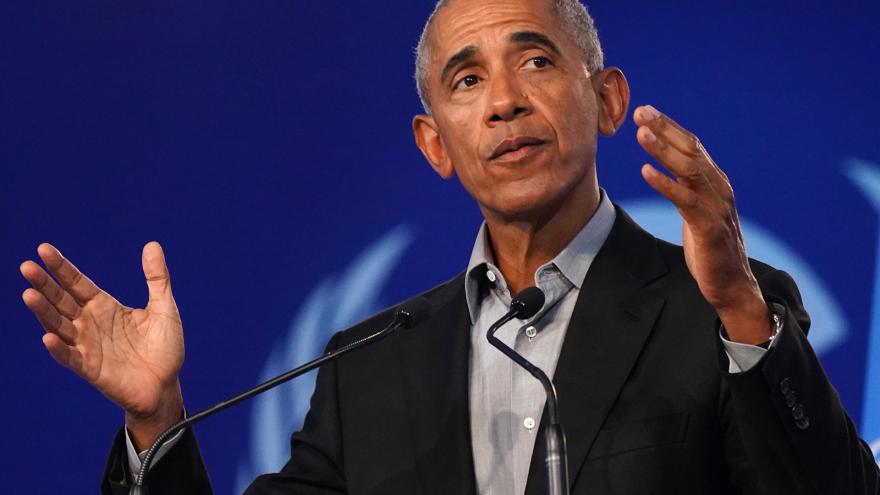 (CNN) -- Former President Barack Obama is urgently throwing himself into the fight against disinformation, taking a yearslong private fascination into the open as he makes addressing the issue a key pillar of his post-presidency.

More than a decade after the false and infamous "birther" conspiracy theory was promulgated by his political opponents, including by the then-private citizen Donald Trump, Obama is hoping his personal experience with disinformation and his knowledge of its ramifications can help determine the best way to regulate social media platforms that promulgate disinformation and find ways to address what he calls the "demand for crazy on the internet" that has filled a void as local news outlets have diminished.

Obama's effort has been sweeping, say the former President's confidants and outside advisers with experience in the tech industry, with Obama convening meetings and conversations with academics, activists, researchers, tech sector leaders, media executives, former government officials and former regulators. People who have met with the former President describe him as gripped by the issue, showing up to meetings with handwritten notes and questions and often referring to reading he has done on the topic, including reports by the RAND Corporation and the Aspen Institute, and a research study on partisan media by David Broockman and Joshua Kalla.

Eric Schultz, an Obama adviser, said the former President views disinformation as a "through line for all of the challenges we face right now," including the pandemic, climate change and racial injustice. And for Obama, Schultz added, the "arc of this issue also tracks the arc of his public life" -- while social media helped get Obama elected in 2008, the misinformation that spread on different platforms also accelerated during his time in office.

Obama made this focus public on Wednesday when he headlined a conversation on disinformation at a conference sponsored by the University of Chicago's Institute of Politics and The Atlantic magazine. He will put a finer point on the topic later in the month when he delivers a keynote speech during a conference at Stanford University.

"It is difficult for me to see how we win the contest of ideas if in fact we are not able to agree on a baseline of acts that allow the marketplace of ideas to work," Obama said Wednesday, lamenting that while attendees had access to all the information they wanted on their phones, there were still large swaths of Americans who believe that the 2020 election was stolen from Trump and that the coronavirus vaccine was not something they needed.

Obama admitted that he "grappled with a lot" during his presidency, including "the degree with which information, disinformation was being weaponized." But recalling his time in office, he said he and his staff "underestimated the degree to which democracies were as vulnerable to (disinformation) as they were, including ours." On baseless questions about where he was born, he said, "That wasn't an example of people being misinformed. There was an agenda behind that promotion of what was clearly a false fact."

Obama told the audience Wednesday that he could "draw a direct line" from his time on the campaign trail to the proliferation of lies about his place of birth and the falsehood that his signature health care law was establishing "death panels" for older Americans, as 2008 Republican vice presidential nominee Sarah Palin had put it.

"There was what has been called truth decay. There was an erosion of what was considered acceptable to assert in the press, period. That is all pre-social media," he said. "And then when social media hits, then I think you saw it spread and accelerate. ... I think it was actually in my second term that you start to see now just bad information, but you also start to see an acceleration of misinformation."

"And by 2016, that is when, well, we know what happened," Obama said, trailing off, acknowledging what everyone in the room knew -- the same man who pushed the birther conspiracy theory was elected as his successor.

Obama argued that he views disinformation as "entirely different from information that is inconvenient," pointing to his "if you like your health care plan, you can keep it" falsehood during the fight over his sweeping health care law -- which earned him the Politifact "Lie of the Year" in 2013 -- as an example of the latter. Although Obama defended the intention behind the line, he said he "couldn't really complain about people criticizing me for it" and said it was different than recent lies about the 2020 election because him saying it was "not a threat to democracy" and "was not intended to somehow subvert the Democratic process."

"In a democracy there are going to be, in the normal course of debate, we will contest what has been said, what has been proposed, what has been delivered and there will be some play in the joints of how we interpret stuff," Obama said, adding that lies about the election and other issues went far beyond that.

'He understands this world'

Obama, now a 60-year-old, gray haired former politician, has fully embraced the technological intricacies of the disinformation issue, according to an outside adviser who has worked in the tech industry, mostly because the former President is "naturally kind of a geek."

"It's not as though it's like this is some new-fangled, whatchamacallit that you will never see on my lawn or whatever," the adviser told CNN. "He understands this world."

The adviser said Obama has more time to focus on the issue because "now he has the ability to talk to a range of experts without it being an official function of government," and so he has convened a range of people to look at the problem.

And that has given him, this person said, not just a better understanding of the way disinformation has personally affected his life and career but also a deep concern that the spread of disinformation will lead to a form of "political nihilism," where many Americans don't know what to believe and just check out from politics all together.

"That is the real nemesis and the real environment that disinformation creates and allows autocracy to flourish," the outside adviser said. "Birtherism is obviously a part of that story, but the stakes have, in some ways, changed so dramatically since then, that it's become part of the context of democracy itself."

In retrospect, "birtherism", or the belief that Obama was not born in Hawaii, was a warning of what was to come, the dark and dystopian route American political discourse was about to take.

"Birtherism" and the "Big Lie" undermining the 2020 election are not at all dissimilar. Both are viral baseless conspiracy theories, with prejudicial undertones, championed by Trump to engage an enthusiastic base and to sow seeds of doubt in the wider population.

The birther conspiracy theory first emerged sometime during the first decade of the century -- Obama said it had been pushed as early as his Senate race in Illinois. It's precise genesis is unclear and disputed.

Come 2011, however, Trump had become a standard-bearer of the birther movement, launching a campaign for Obama to release his long-form birth certificate.

"He doesn't have a birth certificate. He may have one, but there's something on that, maybe religion, maybe it says he is a Muslim," Trump told Fox in 2011.

Obama did have a long-form birth certificate, and the White House released it. Obama later went on to roast Trump at the White House Correspondents' Association dinner that year.

Lee Foster, an expert in tracking disinformation and senior vice president at Alethea Group, told CNN that the birther conspiracy theory was "merely a precursor to the barrage of falsehoods we find ourselves facing in today's political environment."

Foster, who has been involved in exposing foreign disinformation campaigns targeting the United States through social media, said that it is important to remember that this goes beyond the internet.

"Big Tech plays a role in this, but so do our media institutions, our political parties and, frankly, all of us. It requires all of us to tackle," he said.

Despite Obama's keen interest, answers about the best way to counter disinformation have proved more elusive.

During his remarks Wednesday, Obama alluded to the need for transparency about social media algorithms that determine what people see in their online feeds and the issue of anonymity on social media sites.

He said also expressed support for toughening regulations on social media companies. He said that while he is not for "entirely eliminating" Section 230, a rule that protects the companies' ability to moderate content on their site as they see fit, he questioned whether the protections were fair for "paid advertising that is microtargeting certain groups. ... That can be really damaging."

And Obama somewhat mockingly responded to protests from social media companies, who say their algorithms and product design contain proprietary information that can't be shown to regulators or the public.

"I don't know exactly how the inspections on meat are done. And if somebody says we have a proprietary technique to keep our meat clean, that's fine, take it up with the meat inspector," he said sarcastically. "This notion that we have to preserve this because somehow we have proprietary interests, that is wrong."