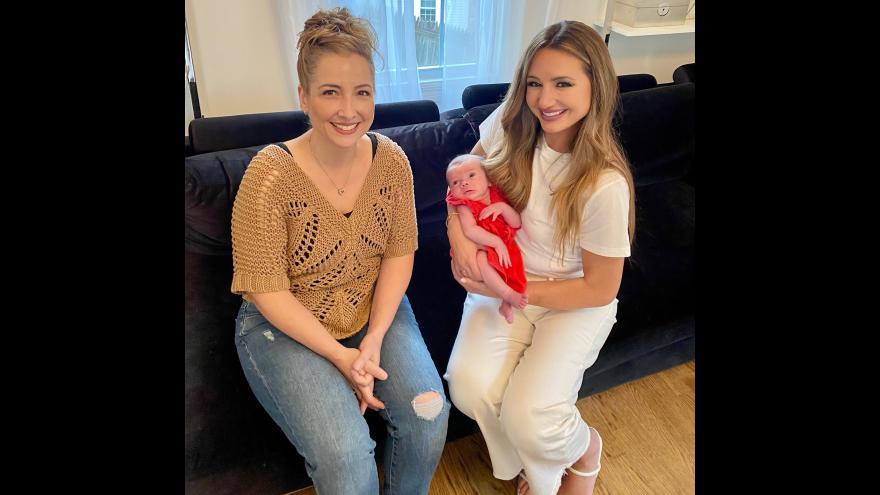 (CNN) -- Boston Marathon bombing survivor Jacqui Webb was greeted by a familiar face after giving birth to her daughter, Ella, last month -- one of the nurses who cared for her after the 2013 attack.

Webb spent three weeks at Tufts Medical Center in Boston after suffering life-threatening wounds when a pair of bombs exploded near the finish line of the iconic race, killing three people and wounding at least 264 others.

She can't say enough good things about the quality of care she got following her injury.

"I thank my lucky stars every day that I was brought to that hospital," Webb said. "And I think when I walked out of there, eight years ago, I said, if I ever had a baby, I'll be back at that hospital."

Webb was due to give birth on August 29, but had scheduled a cesarean section on August 22 in hopes of avoiding the stress of being rushed to the hospital. She went into labor a day early, so her surgery was pushed up.

Nichole Casper was one of the nurses who took care of Webb after the bombing and happened to be on duty that night. Casper has worked in the hospital's Mother-Infant Unit for about four years.

Casper had gotten to know Webb and her family during her time in the hospital, but hadn't seen her since.

She recognized Webb and her fiancé, Paul Norden's, names on the list of incoming patients. Norden and his brother, J.P., each lost their right legs in the bombing.

Casper was in the hallway to get Webb to her room when she was brought in from delivery on a stretcher.

"I think I just looked at her and said, 'Long time not see' and she kind of looked at me and she was a little dazed," Casper said. "She was like, 'Oh hi! They told me you were up here waiting for me.' So it was cute because they were trying to keep her calm downstairs, so they had told her that I was working."

Webb was just coming out of surgery, so their first reunion was a little fuzzy.

"I do remember that I was just elated to see her," Webb said.

Webb, Norden and their new baby, were in the hospital for three days, and Casper picked up an extra night shift, so she could be there for their entire stay.

"I was just excited to see her and catch up," Webb said.

She said it was very comforting to be treated by people who understand what she went through and don't need to be walked through her complex medical history.

"I believe that the whole kind of staff went through that trauma or tragedy with me, and so I just think that they understand it on a different level," Webb said.

She said she didn't think she would have been able to recover from her injuries as well as she had without the hospital staff, so she was glad to be able to share a happy moment with them.

Casper, who has been a nurse for almost 21 years, said she has seen many patients suffering at the worst moments of their lives, but doesn't often get to see their successes after they leave the hospital. The bombing and memories of those patients have stuck with her over the years.

"It was a horrifying time, it was one of the worst times in my nursing career seeing those people that injured," Casper said. "To be able to see her have a brand-new baby and see her with Paul, it made me extremely happy. You know, it was just something that I'll probably never experienced again in my career."