Birds are dying off at an alarming rate. Here's how you can help from your own backyard 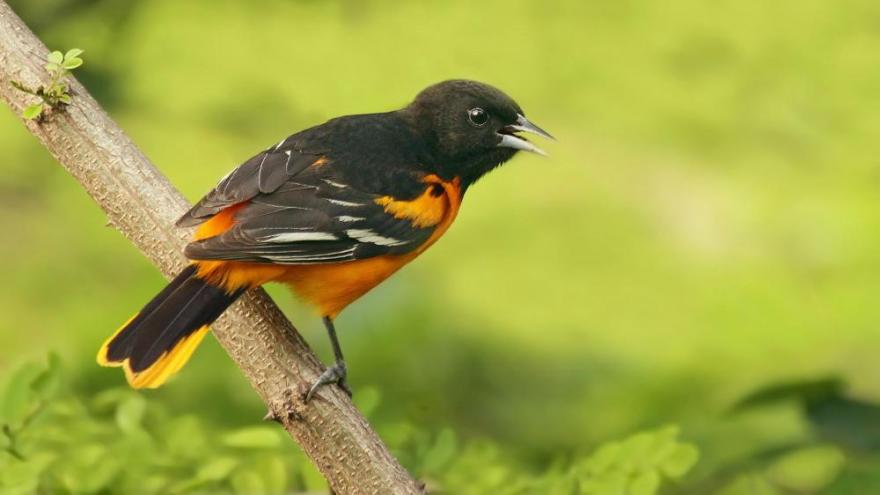 The United States and Canada have lost almost a third of their bird population since 1970, an alarming study recently found.

(CNN) -- The United States and Canada have lost almost a third of their bird population since 1970, an alarming study recently found.

Habitat loss, collisions with glass, hunting by domestic cats, and pesticides are the biggest contributors to the population loss, past research has found, according to the American Bird Conservancy.

For their own sake and because birds can signal larger-scale environmental crises that affect humans, whether we know it or not, it's imperative to be aware of how they're faring -- and to protect them, experts say.

So, what can be done to stop bird loss? While decisions about protecting habitats are often in the hands of lawmakers, there are things you can do in your own backyard to help birds thrive.

"Let's face it, life is a lot better here with the birds than without them. You don't really have to be a bird watcher or a nature nut to feel that way," says John Fitzpatrick, executive director of The Cornell Lab of Ornithology.

"It's thousands of people making little bits of difference that will actually help," he says.

Prevent birds from ramming into your windows

Studies show an estimated 600 million birds a year die after hitting windows in the US and Canada. The problem is that windows reflect the sky and trees, and birds can't tell the difference. Lights left shining in glass buildings at night also draw birds, especially during migration periods -- like the one about to happen this fall.

"I used to work in Chicago and walk around buildings. On high migration nights, we could find 100 or 200 birds having hit the windows," Fitzpatrick says.

Cornell has a new program working with cities like Houston, Dallas and Chicago to have lights turned off on nights when they know heavy migration will happen.

You may have even heard or seen birds hit your home windows, or found them on the ground afterward.

Here's what you can do.

House cats and feral cat colonies are also deadly to birds -- to the tune of at least a billion deaths a year in the United States, Fitzpatrick says.

"Most (deaths) are baby birds. And when you're killing baby birds, you're actually taking away the most important part of the life cycle," says Fitzpatrick.

Baby birds are often near the ground and easy prey for cats, he says. It's the No. 2 human-caused reason for bird loss, aside from habitat destruction, according to Cornell's Lab of Ornithology. Humans are on the hook because we're responsible for most cats, including those treated by catch-and-release programs.

Fitzpatrick, a cat lover himself, suggests putting cats on a leash. The lab also recommends creating an outdoor "catio" so cats can get outdoor time in a penned-in area.

"Cats are amazing animals. But we have to recognize they are making a big difference worldwide in bird (populations), he says.

While manicured lawns are the look of choice for so many communities, Fitzpatrick and many other environmental advocates say they don't help nature thrive.

You know those coffee decals that say "shade grown?" Those are the types of coffee brands that help birds thrive.

Coffee grown under trees provides tons of habitat for all those migrating birds flying to Central and South America, says Fitzpatrick. Coffee grown in the sun often requires clearing forests and the use of harmful pesticides, according to the Cornell lab.

The Smithsonian Migratory Bird Center also has a certification for "bird-friendly" coffee that you can look for.

It takes hundreds of years for plastic to break down in our landfills and environment. Plastic gets into the ocean, into our streams, and all over our cities -- killing wildlife.

Birds are just one of many species that can get entangled in plastic or eat it, thinking it's food.

So, end your personal use of plastic straws, plastic bags, bottles, cups and disposable utensils, the Cornell lab recommends.

Share your love of birds and help track them

"Get people who've never done it before out to see how cool it is. If you love birds and have binoculars, get out to the shore, show your friend a sandpiper or oystercatcher," urges Fitzpatrick.

"Seeing more common birds up close and having somebody tell you about them changes people's lives," he says.

Also, participate in citizen science by observing birds and uploading your checklists to Cornell's eBird program.

"It's hugely informative at a global scale, the information we're getting from citizens around the world," Fitzpatrick says.

Every checklist matters, even if it's once a week or once a month, of if you visit a new place, he says.

Why you should care about birds

Think: Canary in a coal mine.

"If bird populations across all habitats are declining, that means something systemic is happening out there that is no doubt going to be affecting us too," Fitzpatrick says, noting bird populations can signal changes in the "quality of our water, quality of our air, the ability for insects to exist out there as pollinators in our agricultural areas."

Birds also eat insects that are considered pests to humans and help with dispersing seed and pollination.

There are also emotional reasons to care about nature, beauty and happiness.

"We live in a world that is filled with beautiful, migrating, flying singers," says Fitzpatrick.

"We're fortunate to live in North America, where we have a bunch of them -- goldfinches and purple finches, Baltimore orioles and cardinals and indigo buntings and blue jays. These are really amazing things. Isn't life just better to be having these beautiful things around our yards and over our heads?"