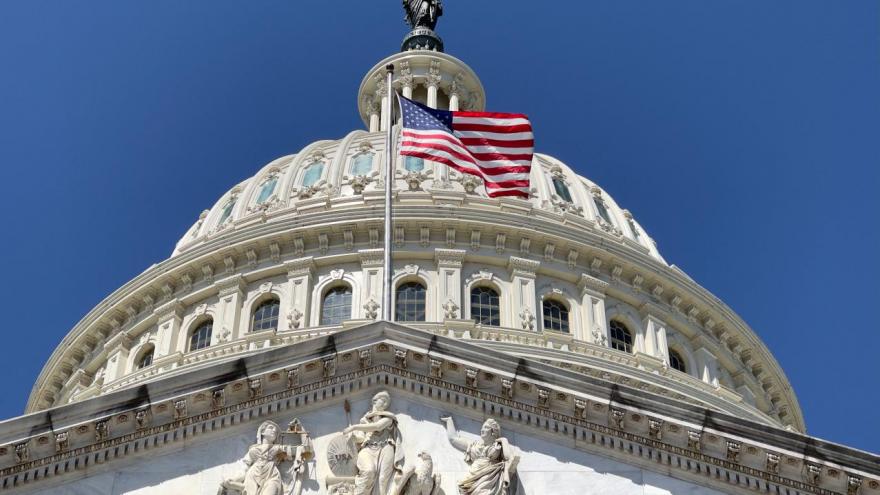 Talks on Capitol Hill over an infrastructure package sit on the brink of falling apart, according to sources.

(CNN) -- Bipartisan talks over a cornerstone infrastructure package sit on the brink of falling apart completely just days before a White House-imposed deadline for tangible progress.

Gone is what for several weeks appeared to be positive, if cautious, sentiment about the prospects of President Joe Biden and a group of six Senate Republicans reaching consensus on a deal to inject hundreds of billions in investment into the nation's aging infrastructure.

In its place is a clear inflection point on talks that have yet to make the kind of progress to advance beyond Biden's Memorial Day deadline.

"We continue to think there needs to be major progress by Memorial Day," Transportation Secretary Pete Buttigieg told CNN's John Berman on "New Day" Monday, acknowledging that getting a bill through Congress and to Biden's desk is a process. "All that is not going to happen by Memorial Day. But we really need to get this done this summer, which is why we continue to want to see, even just in the few days between now and the holiday, some real progress if we're going to pursue this path."

The break comes at a crucial moment for Biden's legislative agenda, with a convergence of dynamics that, if mishandled, could threaten to torpedo the prospects of the $4 trillion in infrastructure, economic and social safety net spending he has put on the table.

But on infrastructure, where both sides signaled a genuine willingness to try and identify a path forward, those involved say there is palpable frustration from both ends of Pennsylvania Avenue that the significant divides on everything from the topline cost to what actually constitutes "infrastructure" in the scope of any deal may be impossible to bridge.

Democrats have for weeks debated how to thread the needle between the desire not just by Biden, but also key moderates in the Senate, to seek a bipartisan pathway without undercutting the ambitious legislative goals of the party that controls the White House and both chambers of Congress.

"He wants a deal. He wants it soon, but if there's meaningful negotiations taking place in a bipartisan manner, he's willing to let that play out," Cedric Richmond, a White House senior adviser, told CNN's Dana Bash on "State of the Union." "But again, he will not let inaction be the answer. And when he gets to the point where it looks like that is inevitable, you'll see him change course."

But with the barest of majorities in the House and Senate, any misstep could cost Democrats the very votes they need to pursue the changes they campaigned for -- and view as a necessity to have as accomplishments as they head into a midterm election year.

"We all know there's a narrow window here," a Democratic senator told CNN. "We obviously want to make sure we'll have the votes with whatever we move forward on, but we also can't play the game where this drags out for weeks or months."

Biden's top negotiators sought to accelerate the process on Friday, putting a $1.7 trillion counter-proposal on the table in a video conference with the GOP group. It was a reduction of more than $500 billion from his initial proposal and sought to outline a series of key areas officials said moved them closer to what Republicans put on the table.

But to Republicans, the offer served to bolster a sentiment that has become pervasive inside the conference since early fruitless talks over Biden's $1.9 trillion Covid relief plan: that Biden himself may strike a deal, but his staff is firmly in a different place.

"Based on today's meeting, the groups seem further apart after two meetings with White House staff than they were after one meeting with President Biden," Sen. Shelley Moore Capito, the West Virginia Republican leading the GOP side of the negotiations, said in a statement Friday.

Republicans also point to divides inside the Democratic caucus about how long to pursue -- and how seriously to take -- any bipartisan effort as another signal for caution.

"There has to be an alignment of interests and both sides have to want to deal. The President and his folks want the big deal, but they don't have the votes for it. And as long as they don't have the votes for it, we have a window to get a deal," Sen. John Thune, the second-ranking Republican, told CNN. "The people who are in the room truly want a deal, and I think the President does too, but I don't know how motivated the Democrats are up here."

Those are concerns that senior White House officials dispute, noting in this case that Biden signed off on the counter-proposal and viewed a half-trillion reduction in his topline not as a final offer but as a way to jar loose a significant shift on the part of the Senate GOP group.

"The President put forward a reasonable offer in the interest of finding bipartisan common ground that includes critical investments in our infrastructure to create middle class jobs and strengthen our competitiveness in the world, as well as cuts to his original proposal and a way to pay for it," Andrew Bates, deputy press secretary, told CNN in a statement. "The ball is now in their court to respond with a good faith counter-offer."

Republicans, they countered, hadn't moved at all off of their topline despite their assurances to Biden in an Oval Office meeting that they would bring their own counter-offer to the table.

White House press secretary Jen Psaki welcomed GOP lawmakers back to the White House once they produce their own counterproposal.

The GOP group plans to meet on Monday to discuss next steps, but it's unclear whether there's any willingness to put on the table anything that would reach the scope and scale White House officials say is necessary for talks to continue in earnest.

One GOP source involved with the talks said their negotiators thought the offer was designed to get Republicans to walk away from the table.

It's a sentiment shared by Republicans on Capitol Hill and one that underscores another existing dynamic -- neither side, Republicans nor the White House, wants to be seen as walking away from the negotiating table.

The White House also has to manage progressives, who have grown increasingly impatient with each passing day.

To this point, Biden's left flank on Capitol Hill has given the White House the month to try and find consensus in no small part because Democrats are keenly aware it's necessary for moderate Democrats to see a serious effort at bipartisanship before they'd open the door to the partisan reconciliation process.

But the patience is beginning to wane.

"I am anxious about our ability to meet the President's stated August deadline if this delay continues, and I am concerned about giving the Republicans a chance to break up the infrastructure bill strategically into things that might be harder to support," said Democratic Sen. Sheldon Whitehouse of Rhode Island.

Senators have just one more week in session before the Memorial Day recess, a deadline that Republicans and Democrats recognize as a potential moment when both sides will be forced to evaluate if the bipartisan talks are fruitful enough to continue.

"We have to have significant movement between now and the end of next week if we are going to be able to put a deal together," Sen. Roy Blunt, a Republican from Missouri, told CNN.

"There are a handful of folks who want to make sure we try bipartisanship first, and I don't know if those folks feel like we have exhausted that yet," one Democratic aide said. "We have to wait for Manchin and his friends," the aide said, alluding to the moderate West Virginia Democrat.

Democrats are still laying the groundwork for a scenario in which they may have to go it alone just in case.

Waiting in the wings, Sen. Bernie Sanders, the chairman of the Senate Budget Committee, is prepared to work on a budget resolution -- the first step in the reconciliation process -- as soon as the White House unveils its budget. The expectation, according to aides, is that process will begin in June although that deadline could slip again if rank-and-file members want more time for bipartisan talks. Democrats on leading committees like Finance Chairman Ron Wyden have also begun rolling out proposals to pay for a robust infrastructure plan.

Last week, Republican and Democratic aides also met with the Senate parliamentarian to try and iron out whether Democrats could use an existing budget to try and pass infrastructure with just 51 votes. Aides are still waiting for more clarity on what tools Democrats will have at their disposal. If the parliamentarian allows Democrats to use one budget multiple times for reconciliation, it would mean Democrats could potentially have multiple opportunities at passing bills with just 51 votes this year.

A decision could come from the parliamentarian this week just as Democratic lawmakers will have to decide if they are ready to move on without Republicans.

"I would hope we can resolve it soon," Senate Majority Whip Dick Durbin said. "There comes a time when we have to say, 'This just isn't going to happen.'"